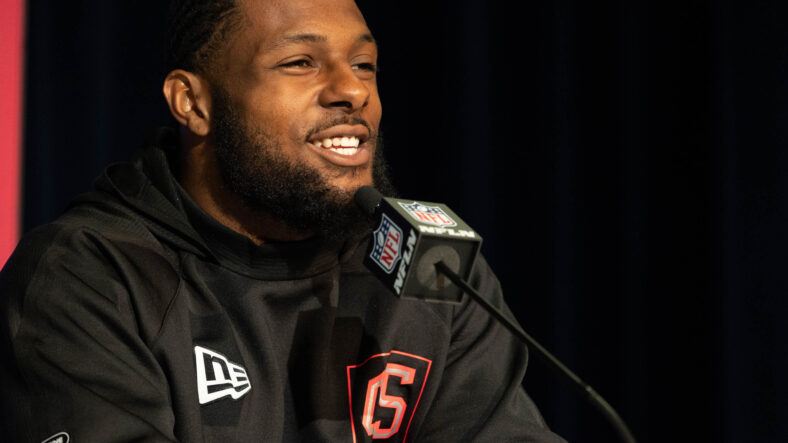 After releasing his top-five positional rankings, NBC Network’s Chris Simms publishes a mock draft every year shortly before the draft on his podcast “Chris Simms Unbuttoned.”

In 2021, his prediction for the Vikings’ pick at the 14th spot was USC offensive tackle Alijah Vera-Tucker. In retrospect, it was a great prediction. The Vikings selected a different offensive lineman, Virginia Tech’s Christian Darrisaw. A pick Vikings fans would’ve accepted at 14, but Rick Spielman traded out of the 14th pick and drafted Darrisaw with selection 23. Why was the prediction a good one? Vera-Tucker actually was picked at the predicted 14th spot. The picking team was just a different one. The Jets traded up with the Vikings to grab the USC lineman.

In 2020, Simms had an interesting prediction about a Vikings player. He had the Philadelphia Eagles picking LSU receiver Justin Jefferson with the 21st overall pick. Surprisingly, Eagles GM Howie Roseman picked Jalen Reagor, who Simms did not select in his first round. Reagor has been a bust so far, while the 22nd pick, Justin Jefferson, has been the most productive receiver in NFL history through a receiver’s first two seasons.

He was correct about the 12th overall draft position, where the Vikings pick in 2022, in the 2019 draft. The Packers held the pick, and he rightly predicted the selection of Michigan’s pass rusher, Rashan Gary, who had his breakout campaign in the 2021 season.

Kayvon Thibodeaux. The Oregon edge rusher was widely regarded as the first overall pick just a few months ago but is sliding in the draft process.

“I think this is where the slide ends for Kayvon Thibodeaux. This is where I’m going to go Minnesota Vikings, Kayvon Thibodeaux off the edge. We’re talking about a defense that is going 3-4, [he will play as] outside linebacker. It’s the third down, we need you to put your hand to the ground and rush the passer. There’s a real need without a doubt. Danielle Hunter is there, but you have to be concerned with some of the medical issues he has had to deal with in the last two years. They are one of those teams that have a desperate need to go pass rusher, [a] difference maker kind of guy. It has been an issue for their football team.“

Surprisingly to his listeners, Thibodeaux went higher than expected. Chris Simms did not include him in his top-five edge rushers of the draft, unlike Aiden Hutchinson, Travon Walker, Jermaine Johnson, George Karlaftis, and Nik Bonitto.

It has to be noted that he did not mention Za’Darius Smith. Since the signing of the former Packer, edge rusher is not a position the Vikings must address in the draft. It’s certainly an option but not a must.

A Star with Question Marks

Thibodeaux is one of the most explosive players in the draft class. Once the ball is snapped, he has a perfectly timed get-off. Not just his timing is special, but also his speed around the edge. That’s how he wins and gets his sacks.

The problem isn’t what he does. It’s what he doesn’t do. The Oregon prospect doesn’t win with pass rush moves and has to learn them to be as dominant in the league as he was in college. Counter moves if the offensive tackle is in a good position and matches his speed and a bull rush move are not part of his repertoire either. All those things are requisite to have a successful career in the NFL.

The Vikings would get a player with high upside but at the same time a player that still has a lot to learn. The question is if they really should invest the draft capital after signing a top free agent at the same position and drafting two edge rushers in each of the last two drafts.