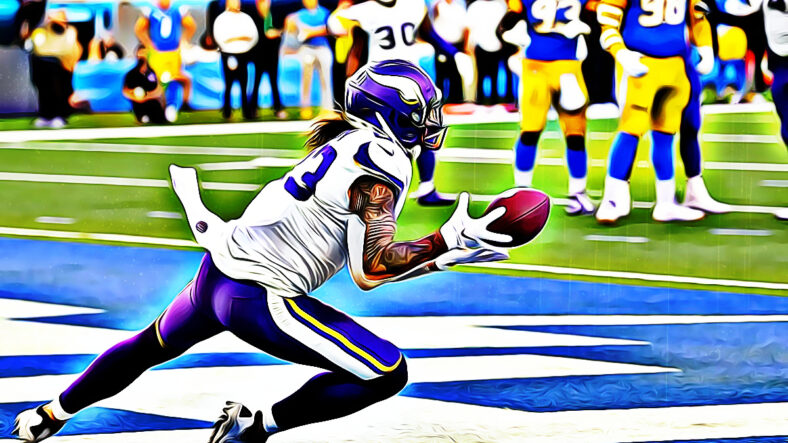 Over 95% of credible mock drafts in the last two-plus months foresee the Minnesota Vikings drafting a defensive player on Thursday night. The hypothesis adds up, but the Vikings cannot forget the other side of the ball in the draft — offense.

Indeed, for long-term planning, Kevin O’Connell’s team needs cornerbacks, an EDGE rusher, a linebacker, and perhaps a safety. That isn’t disputed. Yet, while the offense flaunts big-name playmakers, the draft can be used for that side of operations, too.

This damn spot on the football team hasn’t been solved in five years.

The new Vikings leadership regime claims it can make Garrett Bradbury tick at center. He hasn’t put together the total package in three seasons to date, so this is best-laid plans. If Bradbury does not suddenly remedy his pass-protecting woes, the Vikings should explore a mid-to-late round center in the draft — like Cole Strange or Dylan Parham.

Similarly, the right guard position has inspired nightmares since the start of the 2018 season. Kwesi Adofo-Mensah plans for a fourway summer battle between Oli Udoh, Wyatt Davis, Jesse Davis, and Chris Reed.

But is that good enough for end-all repair at RG?

If it is not, guards like Zach Tom and Marquis Hayes will be available on Day Three of the draft.

Outwardly, this spot on the roster is fine because every Vikings breathing believes Irv Smith Jr. will flourish in O’Connell’s offense.

But what if he doesn’t? What if he gets injured again? Is Johnny Mundt a serviceable tight end for the 2022 Vikings? Nope.

During the mock-draft process for fans, glossing over the letters TE is natural because the beholder thinks, “They’ve got Irv; they’re fine.” But that is dangerous thinking. Tyler Conklin isn’t walking through that door if Smith Jr. falters.

Later-round tight ends like Chigoziem Okonkwo and Daniel Bellinger should be on your mind.

Adam Thielen could play gloriously for three more seasons. Or he could hit a wall in 2022. There is precedent for both outcomes.

Since the start of 2019, Adam Thielen has missed 22% of all Vikings games. If that trend ceases in 2022 — great. But if it escalates as Thielen turns 32 — injury prevalence increases with age — now is an apropos time to scour the NFL draft for replenishment.

The 2nd Round is a masterful and “secret” place to extricate pass-catching talent. Deebo Samuel, A.J. Brown, D.K. Metcalf, and Courtland Sutton can tell you all about it.

This is the section of the draft where George Pickens, Skyy Moore, and Christian Watson will live.

The draft isn’t about simply fielding a team five months from the night of the event. It’s about building a long-term roster, and the Vikings can arguably stand to get better at WR for life after Thielen.