A Dominant Counterpart for Justin Jefferson 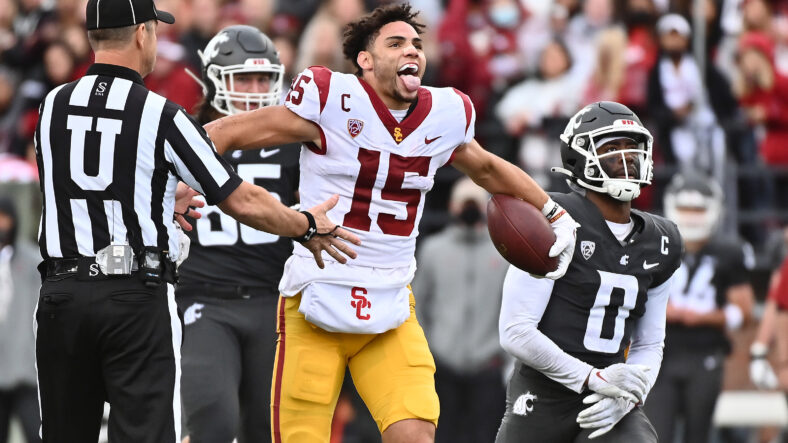 The top receivers in the NFL are getting paid more and more money. The Dolphins pay Tyreke Hill $30 million per year. He is the highest-compensated non-quarterback in the league. He is followed by the Raider and former Packer, Davante Adams. His annual salary is $28 million.

Justin Jefferson is 22 years old and plays at the same level as those two guys. His salary, once he signs an extension, is going to be in the same ballpark. For that reason, teams try to utilize wide receivers on rookie contracts before getting paid big money.

Young wideouts are getting more valuable. Therefore, the Vikings should look at the best ones in the draft. There are quick and fast receiving threats like Jameson Williams and Garrett Wilson, and there are physically dominant ones.

London´s playing style is summed up quickly: He is a big physical receiver. The California native played football and basketball in high school, and it shows on the field. As a senior, he recorded 62 receptions for 1,089 yards and 12 touchdowns. He was equally unstoppable on the basketball court, with averages of 29.2 points, 11.9 rebounds, and just under four assists. The two-sport athlete was ranked number nine among shooting guards and 35th among wide receivers in the nation, per 247sports. He committed to USC to play both sports.

In his freshman year, he played the only six minutes on the basketball court of his college career but was much more successful on the gridiron. In retrospect, London made the right choice. During his three college seasons, London only appeared in 22 football games, because of a broken ankle in 2021 and the shortened season in 2020, due to the pandemic. However, he posted impressive numbers. 160 catches for more than 2,100 yards and 15 touchdowns.

The powerful receiver completely transformed his playing style over his career. He started as a skinny slot receiver and ended as a physically dominating outside receiver.

His size and power are the biggest strengths in his game. Another impressive skill is his ability to haul in contested catches. According to PFF, London led the nation with 19 of those catches. He’s more versatile than other receivers with the same playing style. The USC Trojan can hurt defenses by going deep and on short passes, including screens.

Drake London’s weaknesses start with his speed. He’s not slow by any means but he lacks the elite speed of the other top receivers in the draft.

His catching skills need some refinement. London had eight drops in 2021. Besides that, London has some separation issues. His route running needs some work. If a receiver can´t get open with speed and is not a great route runner, that can be a problem in the NFL.

Garrett Wilson and Drake London are the favorites to be the first receiver taken in the draft. If he is available when the Vikings select at pick 12, they could add a different receiver type to their roster. Jefferson, Thielen, and Osborn are all six feet or slightly above and have about 200 pounds, while London is almost 6´4″ and 220 pounds. All three win with technique and not with power. Pairing elite route runners with a physically dominant receiver could be a gigantic problem for opposing defenses.

Drake London has a chance to become a star receiver in the league early in his career. He is already a dominant receiver and still won’t turn 21 before July. On the other hand, it’s always a question mark if a “contested catch guy” translates to the NFL.

Former Minnesota Vikings draft pick Laquon Treadwell and Patriot N’Keal Harry have not, while A.J. Brown and Mike Williams worked out marvelously for their teams.