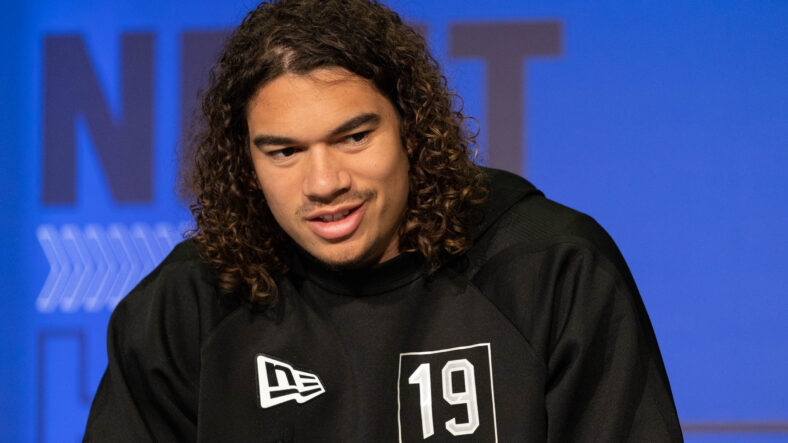 The 2022 NFL draft is fast approaching, and today I want to look at five tight ends the Vikings should consider in the draft. The Minnesota Vikings will be hoping for the Irv Smith Jr. breakout season that was supposed to occur in 2021 — to finally happen during the 2022 season after Smith missed the whole of last season after meniscus surgery.

The Vikings were fortunate to have Tyler Conklin available to step in and perform at the level of a legitimate TE1. His performance last season saw him get a payday with the New York Jets.

Johnny Mundt, who played under new Vikings head coach Kevin O’Connell in Los Angeles, has been signed. He is seen as primarily a blocking tight end, although O’Connell sees him as having some playmaking ability. The depth chart is rounded out with Ben Ellefson and Zach Davidson.

Should the worst-case scenario happen and Smith succumbs to another injury, no one looks ready to step in as Conklin did. Drafting a tight end with playmaking ability and the potential upside should be on the Vikings radar.

Several options will be available throughout the different rounds. There is no player receiving superstar reviews like Kyle Pitts was last year. Some good players will be available in the mid-rounds, where the Vikings may be considering picking up a tight end. So, here are five tight ends the Vikings should consider in the draft.

My favorite option in the draft for the Vikings is Chigoziem Okonkwo, who will probably be available in the 4th or 5th round. The Maryland tight end brings to the table the only thing missing from the Vikings offense. When it comes to the playmakers, he is physically impressive at 6’2 and 242 lbs, according to The Draft Network.

A strong middle-of-the-field pass catcher with plenty of yards after catch ability. Strong hands and a wide wingspan that can see him compliment the Vikings offense already in place. He’s not just power and contested catches, though. He has good speed and decent route running ability. His run blocking needs a lot of work, but the Vikings have Johnny Mundt for that. Okonkwo’s role in Year 1 would be to come in on obvious passing sets, where he would be another excellent weapon to give opposing defenses even more to think about.

Another physical playmaker available in the 4th or 5th round is Texas A&M tight end Jalen Wydermyer. At 6’4” and 255 pounds, it is his physicality that stands out. He isn’t a dynamic player, but he has sufficient athleticism. In the open field, he can build up speed and has a good change of direction. This shows up in his route running and gaining yards after the catch. He is a tough and willing blocker. However, it is an area that needs to be improved. He struggles to gain leverage due to his height.

Greg Dulcich out of UCLA is another option, though he could go as high as the third round. That would be too soon for me as the thought should be defense, defense, and more defense on the first two days of the draft, in my opinion. Dulcich has good straight-line speed and is a playmaker who has reliable hands. His past as a wide receiver can be seen in his route running ability, where he can be flexed out wide when needed.

He can also be used from the backfield, making him an interesting offensive weapon. He likely only comes into play for the Vikings if trades equate to an increased number of Day 2 picks in this year’s draft.

Another tight end that can be flexed out wide and play from the middle is Nevada’s Cole Turner. He would add another big play down the field target to the Vikings. He has enough speed and route running ability to win deep. Turner is a good athlete with good straight-line speed, body control, and agility. He has tallied an impressive 19 touchdowns in the last two seasons with the Wolf Pack. Widely viewed as a 5th/6th round player, he could fall perfectly when the Vikings are looking to take a tight end.

The final option is Iowa State’s Charlie Kolar, who is said to have a pair of the best and most reliable hands in college football. He is not a dynamic or explosive player. However, those strong hands, competitive toughness, and ability to come out on top on contested catches make him desirable. He is best suited to working the seams, crossers, and quicker routes.

Again, he should be available when I’d expect the Vikings to be looking at the tight end position. Rounds 5 or 6.