What Happens if Vikings Trade Down? 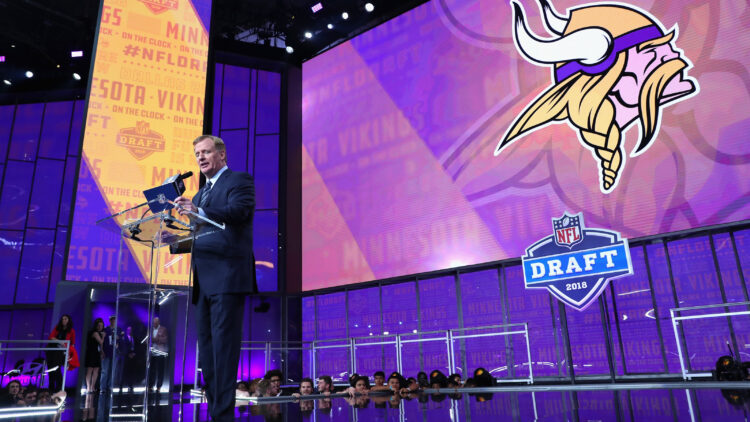 ARLINGTON, TX - APRIL 26: NFL Commissioner Roger Goodell announces a pick by the Minnesota Vikings during the first round of the 2018 NFL Draft at AT&T Stadium on April 26, 2018 in Arlington, Texas. (Photo by Tom Pennington/Getty Images)

After LSU’s pro day, it seems more and more likely that Derek Stingley Jr. will not be on the board when the Vikings are on the clock. Today, I completed a mock draft for the Vikings. What I wanted to find out is: what happens if the Vikings trade down?

The mock draft was conducted using the Pro Football Network simulator. The results of the mock draft were interesting as I watched the board fall. Derek Stingley Jr. was on the board at 12 overall, and the best option would be to take him. However, the goal was not to draft him.

The Cardinals offered a trade: Pick 12 in exchange for Pick 23, 55, and 87. The Vikings accepted this trade offer. So, let’s talk about who is likely to be drafted between the 12th overall and 23rd overall pick.

When looking at this draft simulation, the one thing that pops out is the lack of edge rushers and cornerbacks being taken. The only cornerback taken was Stingley Jr., and the only edge rusher was Jermaine Johnson. This leaves the Vikings in an interesting position.

They have needs at cornerback, edge rusher, linebacker, and wide receiver. You could reasonably go in any direction with the way this simulation played out. However, the best option is likely to be cornerback, especially with having several quality cornerbacks to choose from.

Ultimately, I chose to go with Andrew Booth Jr. in this scenario. Although, you could reasonably go with Trent McDuffie or Kaiir Elam.

What Did We Learn From This Trade Down Simulation?

These mock drafts are always interesting and fun to play with, no matter what you are trying to do. For me, I wanted to know which players would be available in the back half of the draft. As we can see, there are likely to be several cornerbacks available later in the draft.

What exactly does this mean for the Vikings?

There is no reason they absolutely need to select a cornerback with the 12th overall pick. This is great news as there could be a scenario in which Ahmad Gardner and Derek Stingley Jr. are off the board. These two guys are on a higher tier than the rest of the cornerbacks in the draft, and the Vikings should try to get them.

However, the second-tier guys could be great options. This is especially true for the Vikings, who don’t necessarily need a day one starter. Patrick Peterson and Cam Dantzler are good enough to be the outside cornerback tandem. If the Vikings trade down, they could have several cornerbacks available to them, including:

This is not a bad group for “second-tier” cornerbacks.

However, the most exciting part of this simulation is what the Vikings got out of the trade. They were able to draft Christian Watson, a wide receiver out of North Dakota State, and Quay Walker, a linebacker out of Georgia, with the extra picks. Also, the Vikings were able to address the edge position with Drake Jackson from USC and another speedy wide receiver in John Metchie III.

If you take anything from this simulation, have it be just this one thing. There is no need to reach for a cornerback if Gardner and Stingley aren’t available.