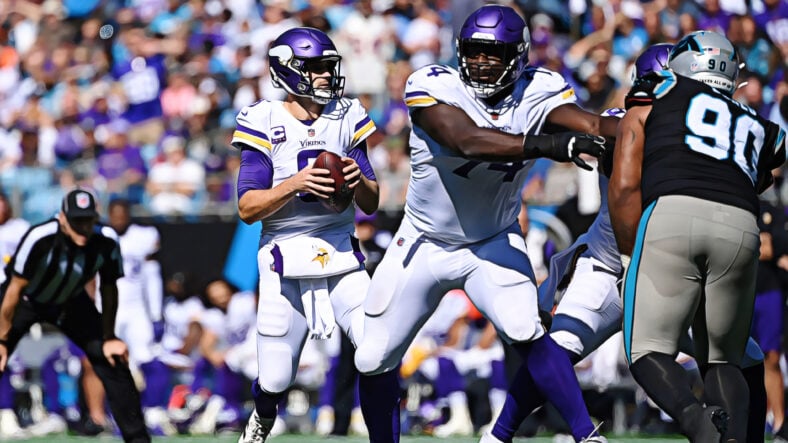 The purple writing on the wall suggests Minnesota Vikings offensive lineman Oli Udoh’s stint at right guard in 2021 was a one-and-done.

At OTAs this spring, the four-year veteran has taken most snaps at the tackle position, indicating Udoh could return to his original job for the Vikings — backup OT.

In 2021, Udoh was the team’s sure-fire right guard, starting 16 of 17 games. Minnesota’s RG output has been problematic since the end of the 2017 season, and while Udoh performed well to start the season, the experiment fizzled.

Overall, Udoh’s grade from Pro Football Focus was mediocre, a 54.4, but his pass-blocking was lackluster. He notched a 62.3 score via run-blocking but just a 39.0 with pass protection. And that type of split is commonplace for the Vikings during the Kirk Cousins era — men who run-block with proficiency but get bulled over in pass protection.

Unfortunately, Udoh did not change the RG trend and was beset by penalties along the way. He was flagged 13 times, the second-most in the NFL behind Dallas Cowboys offensive lineman Connor Williams. Udoh was even penalized 16 times, but the opposition accepted the infractions on 13 occasions. Most of his flags came from holding.

As a backup tackle, though, Udoh is a bit more successful — probably why this brand of Vikings is kicking him back to his roots. In 2020, as a reservist OT, he graded 60.8 from PFF, with a 63.8 score in pass protection. Perhaps tackle is his specialty, and the transfer to guard isn’t his forte.

Too, general manager Kwesi Adofo-Mensah signed new men — some natural guards — for the ever-evolving RG position. In free agency, Minnesota welcomed Chris Reed, a guard from the Indianapolis Colts. Then, in April, Adofo-Mensah spent a 2nd-Round pick on Ed Ingram from LSU, also a guard at heart. To fully hedge the bet, the Vikings also acquired Jesse Davis from the Miami Dolphins, who could play tackle or guard for the 2022 team.

Udoh arrived on Vikings fans’ radar during the final game of the 2019 season. Minnesota rested starters in preparation for a playoff triumph in New Orleans, while Udoh got the start in Week 17 versus the Chicago Bears — opposite Khalil Mack. And he held the terroristic Mack largely in check.

The pivot by Udoh back to tackle duty should become clearer next week at Vikings mandatory minicamp.