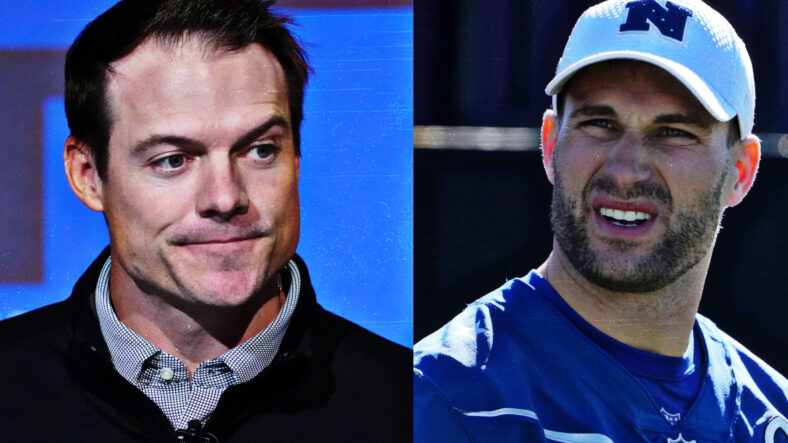 The NFL Draft is one week away, so general managers and head coaches find microphones in front of them more frequently. On Monday, Minnesota Vikings head coach Kevin O’Connell appeared on The Rich Eisen Show and was asked about his quarterback’s ability to take a team to a Super Bowl, a hot-button topic among purple fans.

O’Connell applied affirmatively, pivoting to comments about the positive aspects of Cousins’ game:

I feel really good about the staff that I was able to hire from a leadership standpoint but also just a football intellect and understanding of playing this game at a high level,” said O’Connell. “The one thing that resonates is having those guys turn on the tape, and man for man on our coaching staff say, ‘We got a pretty good quarterback here.’

O’Connell followed up the statement when pushed by Eisen and lauded Cousins’ accuracy, something the new head coach has already remarked about in the past two months. And indeed, of all players with at least 50 starts since Cousins became a full-time starter in 2015, he is the league’s third-most accurate passer behind Drew Brees and Deshaun Watson.

Here’s the full exchange between Eisen and O’Connell:

In 2021, Cousins accounted for 33 touchdown passes and seven interceptions in virtually no garbage time. The Vikings tied the NFL record for games decided by eight or fewer points, so Cousins didn’t have a chance to “pad stats,” as the erroneous argument against him frequently implies.

Cousins’ 33 scores to just seven picks isn’t an easy feat. It may sound like a statistic in which “guys do that all the time.” But in reality, in the last ten seasons, these are the only men to throw at least 33 touchdowns with seven or fewer interceptions in a season:

Of that list, Cousins, Watson, and Ryan were the only passers in those seasons to encounter losing team records. For the Falcons in 2018, Texans in 2020, and Vikings in 2021 — all of those quarterbacks’ defenses ranked eighth-worst-or-lower in the business for points allowed to opponents. Therefore, one might infer defense matters.

General Manager Kwesi Adofo-Mensah and O’Connell re-upped with Cousins because they believe he is the caliber of quarterback who can lead a team to February. Otherwise, the early months of 2022 were the perfect time to start over.

O’Connell has a track record for nudging good quarterbacks to greatness, evidenced by the 2021 season in Los Angeles with Matthew Stafford. Before Sean McVay and O’Connell “got their hands on” Stafford, the ex-Lions quarterback had a 74-90-1 “quarterback record,” instantly rectified to 12-5 with the Rams and a Super Bowl championship as the cake topper.