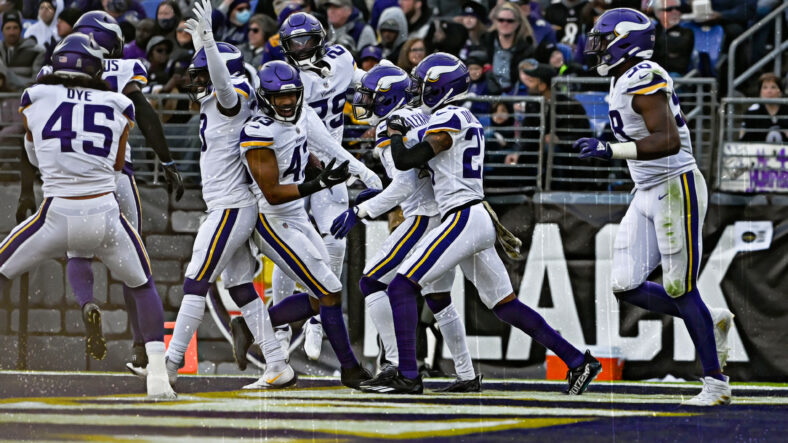 As of mid-June, the Minnesota Vikings could stand to be a little deeper at tight end, EDGE rusher, and maybe even linebacker.

But CBS Sports opined every team’s “biggest remaining need” this week leading up to the 2022 regular season and had a different idea for the Vikings — cornerback.

For now, these are Minnesota’s corners with training camp about six weeks away:

Evidently, Josh Edwards from CBS Sports has qualms with that grouping, or he believes CB is a more dire need than TE, EDGE, or LB. Edwards wrote about the Vikings CB need, “The hope is that Andrew Booth Jr. and/or Akayleb Evans show a lot of potential in Year 1. They have chased talent and dumped significant assets in the position since Xavier Rhodes’ waning years in town. It is time to see the fruits of their labor.”

Make no mistake. Before Peterson re-signed with Minnesota in March, the cornerback section of the depth chart was in a state of emergency. Back then, the outfit included Cameron Dantzler, Kris Boyd, and Harrison Hand as the only viable CBs slated for 2022. But that was early in the offseason.

Since then, the Vikings added Peterson back, signed Sullivan and Hairston in free agency, and drafted Booth and Evans in the 2022 NFL Draft. And boom — that’s five additional players.

So when Edwards tabbed the Vikings CB need as graver than tight end or pass rusher, the reaction is one of minor befuddlement. In theory, if Peterson or Dantzler were hurt this summer, perhaps the Vikings corner depth would cause alarm. Until then, though, Minnesota’s biggest position of need should be considered a backup tight end or supporting EDGE rushers behind Danielle Hunter and Za’Darius Smith.

One could actually argue the Vikings secondary is a strength compared to other NFL rosters. Hell, a prominent individual already did that last month.

Retired Carolina Panthers linebacker Luke Kuechly was asked to name the NFL’s best secondary heading into 2022, and surprisingly, he announced the Vikings. Unsolicited, he nominated Minnesota by saying, “I’m going to go with the Vikings. Harrison Smith, Patrick Peterson, two young rookies — Lewis Cine out of Georgia, and they drafted [Andrew] Booth out of Clemson.”

If the Vikings adhere to Edwards’ advice, free-agent CBs Joe Haden, Xavier Rhodes, and Chris Harris, among others, are available.