More Evidence Vikings and Chiefs Could Trade in NFL Draft 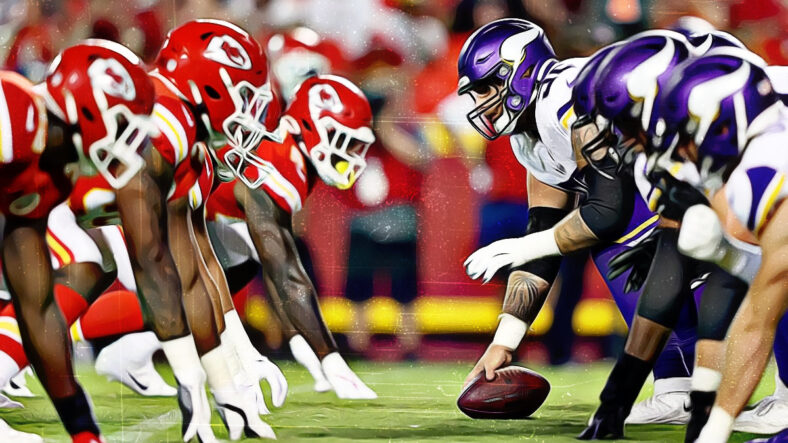 Enthusiasm for the Minnesota Vikings trading down in the 2022 NFL Draft has heightened in the last two weeks as new general manager Kwesi Adofo-Mensah continues to preach value when in front of a microphone.

Adofo-Mensah holsters the 12th overall pick in Thursday’s draft and could theoretically flip the selection for multiple picks if he finds the right partner.

One team rumored as a dance partner is the Kansas City Chiefs, a team possessing the 29th and 30th picks after the Tyreek Hill trade to Miami in March. The Chiefs could select a dazzling playmaker with the 12th pick if they traded with Minnesota, while the Vikings fortify the roster with two 1st-Rounders. For trade-calculator equity, Adofo-Mensah might have to add an extra pick.

Veach continued, “I probably don’t see a huge jump up, throwing a haymaker and trying to get in the top 10.”

In 2017, the Chiefs indeed threw a haymaker, landing Patrick Mahomes (the 10th pick) for two 1st-Rounders and a 3rd-Rounder. It worked.

So, while Veach may not want in the Top 10 this year, swinging a deal for the 12th pick wouldn’t be terribly expensive — probably the 29th and 30th choices to the Vikings. Plus, Veach doesn’t foresee an Aaron Donald-type talent on the board in the back portion of the 1st Round. This implies he doesn’t love, or isn’t married to, the picks.

Veach also boasted the efficacy of picks 30 through 60, where the Chiefs landed Creed Humprhey and Nick Bolton in the 2021 NFL Draft. Because he enjoys that territory, making a deal with the Vikings would blend two worlds for him — a 12th pick, where he could net a blue-chip prospect and maintain his 2nd-Rounders. All together, Kansas City owns four picks before the end of Round 2.

Why would the Vikings entertain a Chiefs chat? Well, accruing an additional 1st-Rounder allows Minnesota to choose a player with a five-year rookie deal, whereas all other rounds come with four-year rookie contracts. The fifth-year option is coveted. Too, Adofo-Mensah may not necessarily share the same philosophy as Veach — that the 29th and 30th picks are unbecoming of 1st-Round talent.

Of course, Kansas City is only one trade-partner possibility for the Vikings. Pittsburgh, New Orleans, and the Los Angeles Chargers are other franchises that could climb the board vis-a-vis negotiations with the Vikings.

But none of those teams can offer two 2022 1st-Rounders this Thursday night.