Maybe the Vikings Should Be Late to the Podium Again? 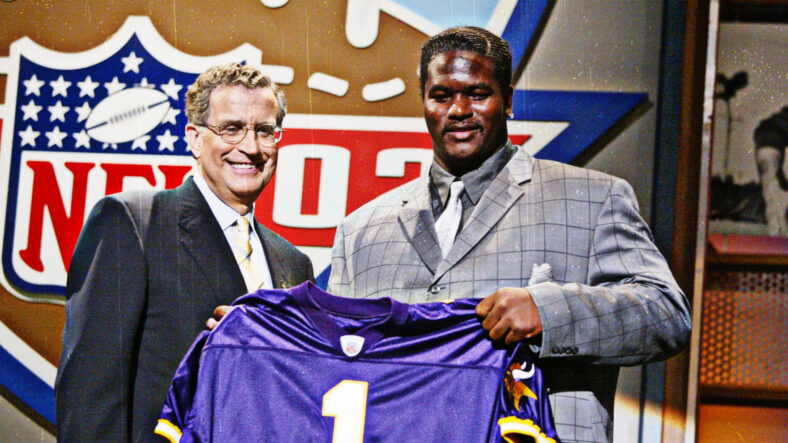 You need some lighthearted reading material after all these mock drafts and things, don’t you?

Twenty years ago, in back-to-back NFL drafts, the Minnesota Vikings were “late” to the podium when choosing 1st-Round prospects. In 2002, Minnesota wanted defensive tackle Ryan Sims but somehow didn’t know or accept that the Kansas City Chiefs chose Sims the pick before. The Chiefs had traded with the Dallas Cowboys, causing confusion on Sims’ availability. But this was stuff that “people in the room” should be prepared for and navigate.

Alas, the Vikings – who weren’t shy about their affinity for Sims – selected left tackle Bryant McKinnie from the University of Miami. And all he did was anchor the left side of Minnesota’s offensive line for a decade. McKinnie later departed for the Baltimore Ravens, winning a Super Bowl with Ray Lewis and the gang in 2012.

Despite the draft malarkey, the pick was a homerun for Minnesota.

Fast forward one year, and the same tomfoolery occurred, this time in the 1st Round of the 2003 NFL Draft. The Vikings didn’t covet some other guy at a different position, though. Allegedly, the franchise wanted Kevin Williams from the jump. Nonetheless, the Vikings tried to pull off a trade with the aforementioned Ravens. But when that didn’t come to fruition, Minnesota front office was forced to say “we pass” on the 7th overall pick. Because of the Vikings shenanigans, the Jacksonville Jaguars rushed to the podium and selected Byron Leftwich, a quarterback. He’s now the offensive coordinator for the Tampa Bay Buccaneers. After Leftwich, the Carolina Panthers sprinted to choose Jordan Gross.

Yet, like McKinnie, the pick was marvelous, and Williams remained an upper-echelon Viking for 11 seasons, notching 60 sacks, five All-Pro honors, and six Pro Bowl trips. He was worth the hassle and draft incompetence.

Few teams before 2002 and 2003 – or after, for that matter – experienced such buffoonery on the draft stage. Thankfully for the Vikings, the embarrassment only lasted in the heat of the moment and reputational lore.

Because the picks, in the fallout of the tardiness, were wonderful ones.