For Vikings Fans, Now Is the Time to Root for Chaos. 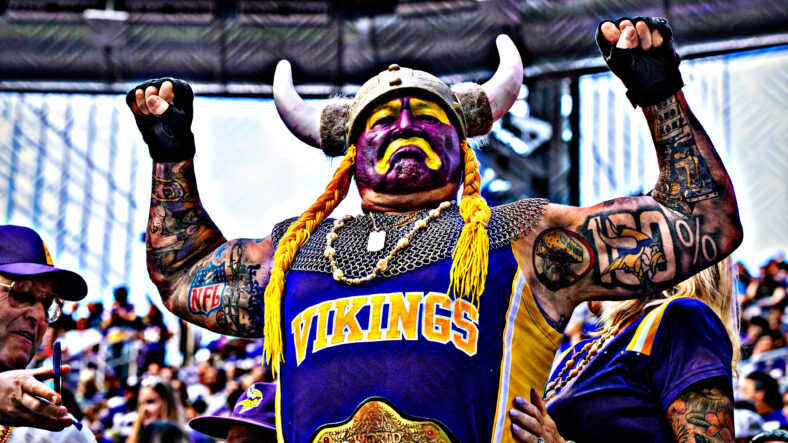 The Minnesota Vikings live in a tender draft spot. This is undebatable.

The 12th hole of the 2022 NFL Draft is just good enough to perhaps seize a blue-chip talent, but too far down the board for a guarantee of one.

Some call it Draft Purgatory. And purgatory is a word some cynical fans adore associating with the Vikings, whether it’s draft positioning, win-loss outcomes, or Super-Bowl-lessness. Like the last two seasons, the Vikings are stuck in the middle — this time in the good part of a draft class.

Recently, momentum for Notre Dame safety Kyle Hamilton falling to Minnesota at #12 has spiked tremendously. Hamilton could reasonably “be there” for the Vikings on Thursday night.

But here’s the deal: chaos must transpire for the Vikings to wrap arms around a Top 10 talent.

Why? Because Hamilton — or Derek Stingley Jr, Ahmad Gardner, Kayvon Thibodeaux, etc. — are flat-out too good for a downward tumble. None of those men should be attainable for Kwesi Adofo-Mensah in a common-sense-laden world.

Yet, drafts aren’t designed to proceed according to your mock drafts. With or without the Las Vegas Raiders in the mix, silly stuff occurs. Teams reach for men. Franchises do the unthinkable. The Vikings even forgot it was their turn — two years in a row — 20 years ago.

You must endorse mayhem if you’re a Vikings enthusiast, as that is the only viable method — sans a trade up the board — to land Hamilton, Stingley Jr., Gardner, etc.

What is the mayhem? It’s a team drafting a quarterback way too early inside an underwhelming QB draft class. It’s the Raiders drafting Alex Leatherwood in Round 1 last year for some Godforsaken reason. It’s Daniel Jones whimsically flying off the board to the New York Giants in 2019.

Those gaffes bode well for Adofo-Mensah. If Kaiir Elam is chosen with the eighth pick or so, stand up on your sofa and holler. Should Kenny Pickett join the Panthers, do a Griddy in the living room.

Shenanigans are the best way for the Vikings to strike on a sure-fire draft prospect. You want quarterbacks, wide receivers, and weirdos to go off the board early — and often.

If that happens, the other dudes, through a simple process of elimination, fall into the Vikings lap.

Of course, this doesn’t necessarily apply to other teams later in the 1st Round. The Kansas City Chiefs, for example, with the 29th and 30th picks, aren’t going to draft Hamilton. They’ll find decent football players, but monsters-of-rock prospects will be gone by then.

Solely because the Vikings exist at the fragile 12th spot, early pandemonium is preferred.