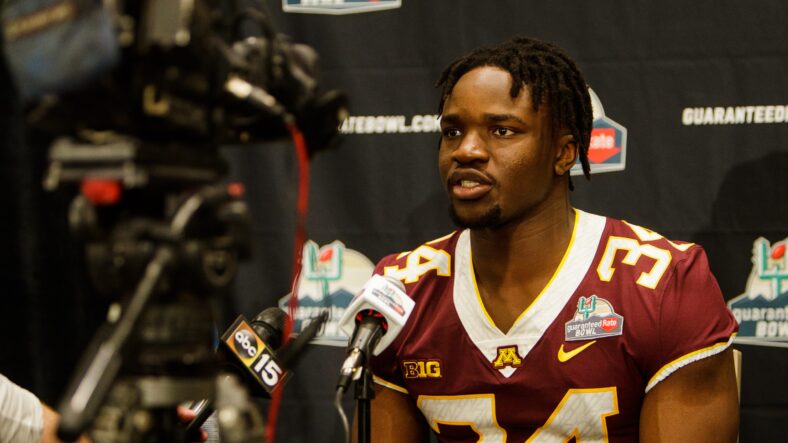 The arrival of Ed Donatell as defensive coordinator and the switch to a version of a 3-4 front has led to many questions about one certain position — outside linebacker. Technically, the Vikings didn’t have any on the roster, though a case can be made for Danielle Hunter and DJ Wonnum to transition to that position. It was certainly seen as a priority position this offseason for the Vikings.

The case for selecting an outside linebacker in the first round of the draft has weakened with Smith’s signing. But a rookie to learn the ropes behind the formidable duo of Za’Darius Smith and Danielle Hunter is still a great way to go. There are plenty of Day 2 draft prospects for the Vikings at this position.

Well known to Minnesota sports fans after four years as a Golden Gopher, Boye Mafe, who grew up in Golden Valley, Minnesota, exploded onto the scene at this year’s Senior Bowl. His draft stock rocketed from the perception as a third-round talent to a possible first-round prospect.

With a bit of luck, we might still be able to snag him early in the second. I would love this pick. It has nothing to do with hometown favoritism either. If the Vikings can land a top cornerback in the first round, there isn’t a better edge defender you could land in the second. That would be the dream scenario.

The recent injury to David Ojabo might see Mafe sneaking even higher on draft boards. The chances of landing him on Day 2 seem to get slimmer with each passing week.

He is a raw athletic talent with an incredibly high ceiling. Coming in to learn behind Danielle Hunter and Za’Darius Smith would be a mouth-watering prospect. His explosive playmaking nature would boost the Vikings defense from Day 1.

The speed and twitchiness of Arnold Ebiketie make him an exciting prospect. He can make an impact in his rookie season as a designated pass rusher who can line up from multiple positions. With versatility — the buzzword for the Vikings new-look defense — Ebiketie would fit the bill as a versatile pass rusher, who, if used right, can be a matchup nightmare due to his explosives bursts of speed. He needs to greatly improve his run defense to become a more well-rounded player.

Again, it’s his speed where he can find penetration into the backfield and get after the ball carrier, and success will come. If linemen can get their hands on him, he gets into difficulty. Coaching and development to get off of blocks and back into pursuit are what’s needed for him to reach his full potential.

Viewed as a hybrid edge defender, Kingsley Enagbare brings a blend of burst, length, and power to his pass-rushing. He has experience playing in multiple fronts, which would be valuable and afford him more opportunities as the Vikings defense is expected to go with multiple fronts this season.

Outside linebacker as a pass rusher is where he’d be better suited early on in his career. Developing his run game and using his hands to better effect would give him the potential to be a starting-caliber edge defender at linebacker and defensive end.

Drake Jackson is a good athlete who can get after the quarterback. He comes across as a finesse-type player and could do with getting stronger at the point of attack. His length and range are a plus point and help in run defense, but he doesn’t come across as someone who likes to get stuck in and mix it with the big boys. When things get physical, he starts to struggle.

One thing he has that the previous names in this list don’t is an ability to drop back into coverage. He has even been known to go out and line up to cover slot receivers.

Finally — the versatile Nik Bonitto. There’s that V-word again. Thus, I’d expect Bonitto to be a player on the Vikings radar. He can line up as the outside linebacker in a 3-4 or an off-the-ball linebacker in a 4-3. He is slightly undersized, so he wins with his speed, bend, and body control. His creativity with pass rush moves makes him difficult for linemen to get hold of him.

Despite his size, he is good at setting the edge in the run game and quick to disengage and locate the football where he is an excellent open-field tackler. Bonitto can also drop in coverage, with the awareness to play zone and the athleticism to cover in man. Bonitto is an exciting prospect who teams may look past due to his size. If used the correct way, he can be a difference-maker in the NFL.