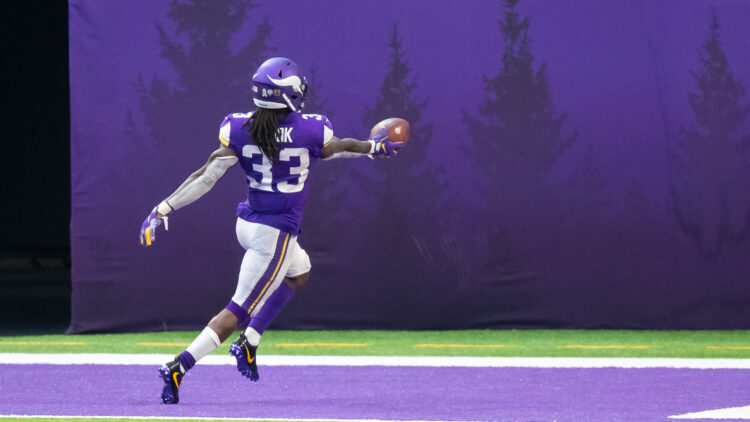 The Vikings were a run-first team during the tenure of Mike Zimmer. The former head coach wanted to control the game by running the ball and having his defense stop opponents. In theory, there’s nothing wrong with that, but it only works if the defense is good, which wasn’t the case in 2020 and 2021.

Despite paying top dollars for the passer, Kirk Cousins, and having an elite receiving duo, the Vikings should continue to feature the running game. The team doesn’t just have an elite receiving duo but also an elite running back. According to the ESPN position rankings by people inside the NFL, Cook ranks fourth among all NFL backs.

Great Despite Down Year?

2021 is titled a ´down year´ for Cook. He wasn’t bad but didn’t appear as dynamic as in 2019 and 2020. A bad season for Cook is still better than the best season of most backs. He finished fifth in rushing yards, despite missing four games due to injuries. The Vikings still missed 400 of his rushing yards and 10 touchdowns compared to his 2020 campaign. That’s how great Cook was in that season.

Per NFL Next Gen Stats, Cook had 0.34 rushing yards over expected per run, overall, 81 yards. The offensive line didn’t create as many holes as in recent years, and he didn’t make as much out of opportunities as in previous years. In 2020, Cook had 0.81 yards over expected, a total of 251, which ranked him near the top of the league. The 2021 season can very well be titled as a ´down year,´ even if he was still very good.

Last year, Cook ranked third. He dropped one spot. ESPN didn’t just rank the players. They “surveyed more than 50 league executives, coaches, scouts and players to help us stack the top 10 players.” Cook did get at least one top vote, and his lowest ranking was eight.

“Some around the league still have no problem putting Cook in their top three based on his explosion, vision and toughness. With a full season, he could put up historic numbers. But that is sort of the problem — Cook never has played more than 14 games in any of his five NFL seasons.”

Indeed, Cook’s durability is his biggest problem. In his fourth career game, the running back tore his ACL and missed the remainder of the season. Since then, he’s had nagging injuries every year. Especially in 2021, he played with an ankle injury, and later in the year, Cook dislocated his shoulder. His backup, Alexander Mattison, has to be ready at all times because of Cook’s durability concerns. One veteran offensive coach said about the Vikings runner:

“He needs to stay on the field. The whole team is different when he’s in there,” a veteran NFL offensive coach said. “He’s great and can get even better with discipline as a runner and growing as a third-down receiver. I think he’ll show a more all-around game in a new offense.”

Cook already talked about his usage. It is assumed that he’ll be more involved in the passing game. Maybe that results in fewer runs into a wall of 300-pound people, which should help his durability. In the OTAs, Cook was often lined up as a receiver. He probably won´t do that very often, but running routes out of the backfield is something he can, and probably will do, more often.

“Despite playing 13 games last year, Cook still produced 779 yards before first contact, second best in the NFL. And he recorded north of 1,100 rushing yards for the third straight season.”

Fowler is right. Cook is great at that. His vision is second to none, and he always knows where he has to run. The Vikings’ zone running scheme allows him to find the holes. Another big part of his game is speed. One member of an NFC front office said: “I love Cook. Give me Cook all day. That burst is impressive.”

Cook’s speed shows in the stats.

The combination of speed and vision is dangerous, and defenses must be aware of that. Cook can score whenever he touches the ball.

His legendary game with four touchdowns to upset the heavily favored Packers in Lambeau Field was a special display of his skills.

In 2022, the offense is expected to shift towards throwing the ball, but Cook still plays a big part of the offense. The head coach, Kevin O’Connell, has to make sure to keep the Vikings’ offense balanced, especially with a great runner like Dalvin Cook.