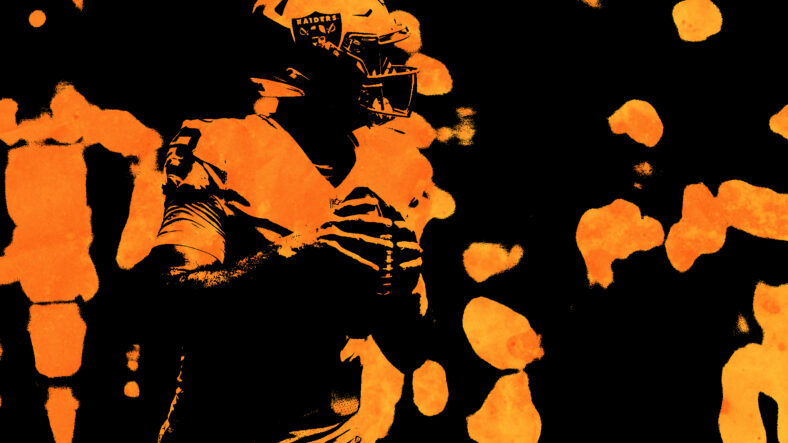 The Chicago Bears signed a new quarterback on Wednesday, bringing aboard Nathan Peterman, who previously played for the Las Vegas Raiders.

Peterman will presumably compete for a QB2 job in 2022.

A 5th-Round pick from the 2017 NFL Draft, Peterman now achieves mini-journeyman status for a 28-year-old, beginning his career with the Buffalo Bills before the Josh Allen era and most recently backing up Derek Carr in Las Vegas.

Chicago is firmly committed to second-year passer Justin Fields, so the Peterman addition should be considered a shots-fired move. In 2021, Fields tossed seven passing touchdowns and 10 interceptions in 10 starts during his rookie campaign, an underwhelming output for the Ohio State alumnus. The Bears were 2-8 under his leadership.

Fields ranked 32 out 34 via all major quarterback ranking metrics.

In Peterman, the Bears onboard a man who’s started four games in his career — all with the Bills — tallying three passing touchdowns to 12 picks en route to an embarrassing 34.0 passer rating.

Peterman is most famous for a Week 17 game against the Los Angeles Chargers, where the then-rookie tossed five interceptions to no touchdowns. Miraculously that Week 11 afternoon, the Bills still scored 24 points en route to a 54-24 defeat versus Philip Rivers and the Chargers.

The Bears also employ Trevor Siemian, who used to play for the Minnesota Vikings, and Ryan Willis from Virginia Tech in the event something happens to Fields or Peterman.

Peterman played against the Bears one time in his career, as his Bills were crushed 41-9 in 2018 at New Era Field. He threw three picks that day and no touchdowns.