Another Viking Wants to Retire with the Team, Too. 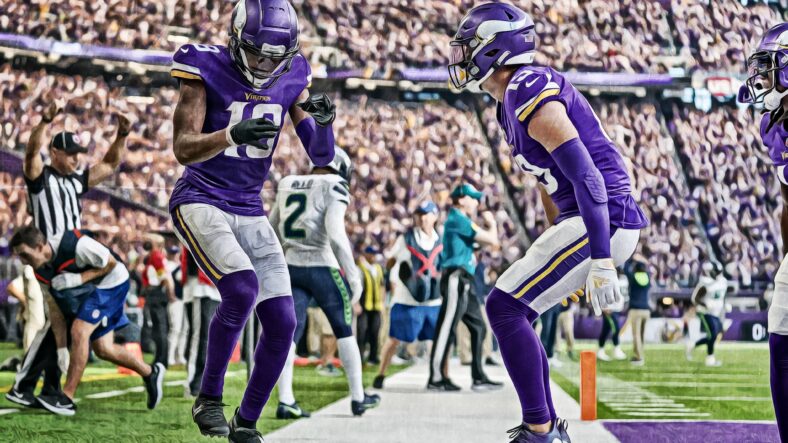 On Monday, the Minnesota Vikings quarterback reiterated his desire to retire with the franchise as the team reported to Eagan for voluntary team workouts.

Thielen restructured his contract this offseason as Minnesota needed funds to sign players like Za’Darius Smith, Harrison Phillips, Jordan Hicks, Chris Reed, Chandon Sullivan, Jesse Davis, and others. New general manager Kwesi Adofo-Mensah really just wiggled Thielen’s money around, shoving some into the future. But Thielen had to sign off on the move.

The Vikings plucked Thielen from Minnesota State inside the 2013 undrafted free agent draft class. He didn’t play in the 2013 regular season, instead living on the practice squad. Like this offseason, the organization underwent full-scale change in 2014, and my, oh my, was Thielen a benefactor.

Mike Zimmer was hired to lead the franchise, carrying the Vikings to the NFL’s 10th-best record from 2014 to 2021. Immediately upon his arrival, Thielen took on a semi-prominent role as a special teams savant in 2014.

But in 2015 — then solidified in 2016 — Thielen morphed into a household-name wide receiver, tallying receptions and yards all over the place. Thielen’s rise to power in Minnesota was storybook and folklorish, born and raised in the state, educated in Mankato, and boom — plopped onto the home-state NFL team.

Because of that rags-to-riches tale, Thielen is revered, nearly immune to any criticism from fans — a rarity in The Digital Age.

Since taking over as a full-time wide receiver in 2016, Thielen ranks fifth leaguewide in receiving touchdowns, 12th in receiving yards, and 13th in receptions. And that’s all for a man unfamiliar to people living in 49 other states not called Minnesota back in the mid-2010s.

So when Thielen comments on his plan to retire with the franchise, the fairytale-like storyline checks out.

Thielen will be 32 this summer, so his “days are numbered” for NFL employment — unless he somehow emulates the careers of Jerry Rice, Larry Fitzgerald, and Tim Brown. Few do.

However, his career took a sharp turn toward scoring — rather than yardage accrual — in 2019. From 2016 to 2018, Thielen was a dependable catcher of footballs who seldom saw the endzone. Starting in 2019, the pattern flipped. In the last three seasons, Thielen ranks fourth in the NFL for receiving touchdowns but 41st in receiving yards. It’s weird but acceptable.

Remaining with the Vikings is also an interesting plot twist as many onlookers of the team believed a new general manager and head coach would signify a full roster rebuild. And that would’ve sent Thielen elsewhere — an odd thought for Vikings fans to digest.

None of that is happening, though, at least not in 2022. Thielen and the Vikings have again renewed “all in” stakes for the upcoming season.

If it goes well, Thielen could indeed retire with the organization.