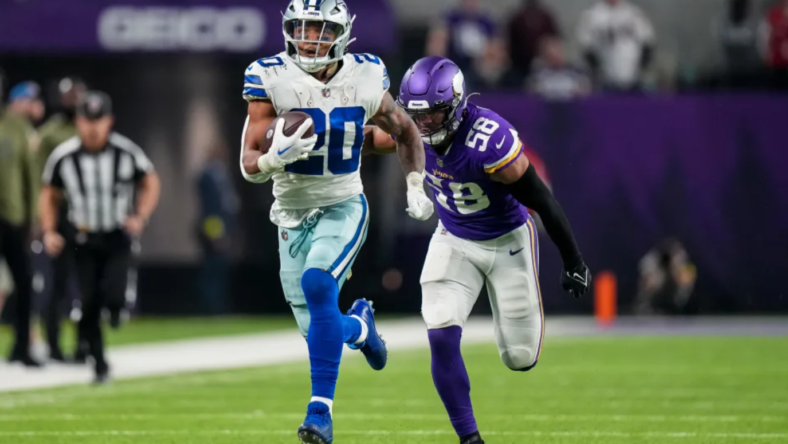 How exactly do you react to a 40-3 loss at home in the national game of the week? “It’s embarrassing” many Vikings players told us Sunday after the game and Monday as they met the media for their weekly press conferences.

There’s not a whole lot to diagnose with a loss of this magnitude. You don’t need to sit down and dive deep to figure out what went wrong when really everything went wrong. Sure, there’s some self-scouting to ensure that this doesn’t happen again, but is it really a good thing that they have to turnaround and focus on the Patriots right away for Thanksgiving night?

According to a few players, it might be the best thing.

“We want to try to get on the field as fast as possible,” Vikings wide receiver Adam Thielen told The Power Trip Morning Show on KFAN Monday. “After a frustrating loss like that all you want to do is get back out there in front of your fans and show that’s not who we really are, that’s not really us.”

Another veteran, Patrick Peterson echoed that thought later in the day telling Dan Barreiro and KFAN, “The best thing that we can get out of this is that we have a game in three days to kind of get that bitter taste out of our mouth a little quicker.”

But it remains important that in their haste to turn the page and right the ship sooner rather than later, that they not forget what happened on Sunday.

The Minnesota Vikings were exposed by the Dallas Cowboys and the whole world saw it. Less importantly, the public saw it and all the doubters that hadn’t really bought into what the Vikings were selling, are not off the bandwagon once again. More importantly, the rest of the league now has tape on how to get at the Vikings offensive and defensive units. They may not all have the same personnel that the Cowboys do, but the blueprint is laid and if they can replicate the actions that Dallas took, they have a better chance to rattle Kirk Cousins and the Vikings.

And then there’s another perspective, shared on that same Power Trip Morning Show from Monday from a retired player, former Vikings linebacker Ben Leber. A half step removed from the embarrassment felt throughout the locker room on Sunday, Ben has the knowledge and experience of the situation but sees it from slightly different lens. Given the point of the season that we are in heading into Week #12 with seven more games on the docket, Leber suggests that with the team’s injuries starting to mount up for the first time this season, a full week of recovery and preparation for Bill Belichick might have been a good thing. Allow Darrisaw, Evans, Tomlinson and other banged up Vikings a full week of recovery before attempting to get back on the track they were once rolling down.

It’s the weighing of your desire for a quick mental recovery up against the elongated and more patient approach to achieve better physical recovery…and there may not be one single right answer. To some respect, it might depend on how sore or hurt your body is when you’re answering the questions.

Either way, the Vikings will play the Patriots on Thursday night this week. Both teams are on the short turnaround, thought the Patriots enter on the heels of a dramatic walk-off victory while the Vikings take the field which was the scene of the crime just four days prior. Which team will still be feeling the effects of the Week #11 hangover will likely determine which team comes out on top and which takes the loss.