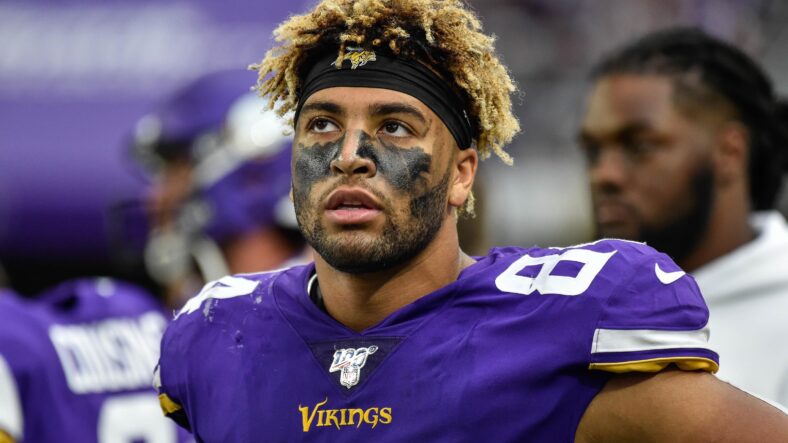 There’s not a whole lot of good to say about the Minnesota Vikings performance on Monday Night Football last night in Philadelphia. At first gaze, it was a full fledged meltdown against what we think will turn out to be a good football team. Everything that went right for the Vikings in Week #1 against the Packers went wrong last night against the Eagles.

Sure Kirk played one of the worst games of his career. Sure Dalvin Cook, Adam Thielen, Za’Darius Smith and Danielle Hunter were invisible. But there were two moments in particular that changed that tide, or rather could have, nay should have changed the tide of the entire game.

Despite the fact that they were largely getting the snot kicked out of them in the first half, the Vikings had a chance to snap back to reality right before the half and set the tone for the rest of the game. With 1:41 left in the 2nd quarter last night and the Vikings trailing 21-7, Kirk Cousins was finally looking to get a little something going on offense. Running a simple go route through the Eagles defense Cousins identified tight end Irv Smith Jr. hitting the void in the zone defense and hit him in stride with his best pass of the night. With the corner ten yards behind him and the safety late two switch over, this play had seven points written all over it…but Irv dropped it. It was just as bad as Christian Watson’s drop for the Packers in Week #1 except this one would have pulled the Vikings within one score heading into the half. Instead, the drive dies, the Eagles get the ball back and get a FG before the half comes to a close pushing it to a three score game.

Secondarily, despite how poorly they had played in the first half the Vikings defense didn’t allow a point in the second half of the game. Still finding themselves down 17 points with 3:26 left in the third quarter the Eagles lined up for a 41-yard field goal and a chance to extend their lead to 20 points but Patrick Peterson busted through the Eagles line of scrimmage and blocked the Jake Elliot attempt. The ball popped off to the far side of the field where cornerback Kris Boyd picked it up in stride and he was off to the races…right? Nope, Boyd recovered the loose ball, began his trek down the field but then got caught from behind by the Eagle’s holder, punter Arryn Siposs.

Now get this, Siposs, who is 6’2″ and 212 pounds is a former Aussie Rules football player who ran the 40 yard dash in 5.09 seconds back in 2020. He’s now a punter, a guy who hardly runs on the football field and began this play in a crouched position down on one knee. Conversely, Kris Boyd who last time I checked chases receivers for a living ran a 4.45 40 yard dash back in 2019.

So someone needs to explain this play to me, how did Boyd not outrun the punter and stroll into the end zone untouched? Instead, the Vikings started with the ball at the Eagles 30 yard line, Kirk threw an interception and they got ZERO points out of the whole ordeal.

These two moments did not lose the game for the Minnesota Vikings, but when you look at all of the opportunities that they had to get themselves back into this thing, these two stand out glaringly.