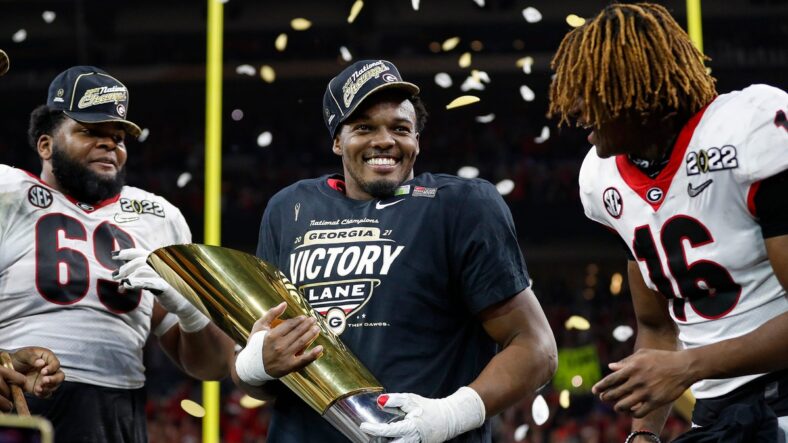 The 2022 NFL Scouting Combine has come and gone, but it has not left without making a lasting impact on this draft class. For the Minnesota Vikings draft, this is an organization with a multitude of needs from the secondary to the offensive line. Sound familiar? It should. This seems to be the trend of nearly every Vikings draft over the course of the past 10 years or so. This time around, the options are plentiful to fill these needs. Names like Ahmad “Sauce” Gardner come to mind as a top cornerback to select. What happens if their dream CB comes off the board early, though? Or, for that matter, what should they do with their remaining seven selections? While options are numerous, one key theme remains consistent: the Vikings should have a goal to select as many Georgia Bulldogs as they possibly can.

Of course, Jordan Davis is likely the first player from this particular program that comes to mind, especially after his absurd combine performance. The defensive tackle made it clear that NFL teams should consider him as much more than just that. He’s certainly a big run-stopper that can take up space in the middle of the d-line, but Davis’ athleticism bodes well for him to be able to adapt to playing all over the defensive front even at his massive size.

Davis is far from the only player needing to be under consideration for the Vikings though. Even just on the defensive line, there are two other prospects who could easily be considered in either the first or second round. Travon Walker has boomed up the draft board in recent weeks, and his fabulous combine was the exclamation point he needed in order to verify that it was a warranted rise. Walker is an extremely athletic edge rusher and will likely end up being a first-round selection.

Even Davis’ counterpart on the interior defensive line, Devonte Wyatt, had a terrific combine performance. He actually topped Davis’ 40 time of 4.78 by a skosh, running 4.77. He’s certainly a more developed pass-rusher in terms of technique too, which bodes well for his potential to be a versatile player. If Minnesota opted to go CB in the first round, they could likely snatch Wyatt in the second.

The Georgia Bulldog pipeline still doesn’t end there, though. Remarkably, the Bulldog defense still has three or four other players that could be taken in the first two days of this draft. Minnesota needs to find some linebacker depth at some point this offseason, and a trio of Bulldogs again come to mind.

Standout Nakobe Dean highlights the group, but both Quay Walker and Channing Tindell would certainly suffice at an OLB spot. Dean and Walker will be off the board within the first two rounds, but Tindell could be a sneaky value pick in round three.

Somehow, we’re still not through all the Georgia options for the first two days. Wide receiver George Pickens went into the 2021 season recovering from an ACL tear. The numbers were a bit lower than usual because of that, but his combine performance was spectacular. If he’s available in round two, the Vikings could give them an embarrassment of riches at the wide receiver position.

Even the secondary may receive some Bulldog help. Safety Lewis Cine is one of the top prospects at the position, and he’s someone I’ve mocked to the Vikings on several occasions. Cine has a hard-nosed playstyle that is very similar to “The Hitman” Harrison Smith. It’s another position that could use some youth through this Vikings draft class, and Cine could be an immediate starter.

Overall, this exercise should show that the 2022 NFL Draft is absolutely loaded with depth. Just out of the Georgia program alone there eight players that could play large roles for just about any NFL team, and that list hasn’t even listed James Cook yet. The Minnesota Vikings in particular have many holes to fill on the defensive side of the ball, and Georgia Bulldogs could fill just about any of them. 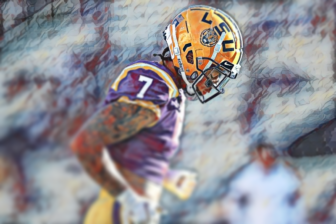