No Love Lost Between Thielen & Belichick

Hop in that time machine right there for a minute with me and travel back to 2018. It wasn’t a great season for the Minnesota Vikings and this particular game against the New England Patriots didn’t go their way either.

In the midst of the team’s frustrations on their way to a loss, Vikings wide receiver Adam Thielen got into a sideline spat with the greatest coach in NFL history Bill Belichick. The scenario surrounded an on field delay or injury that allowed the Patriots extra time to review a would be challenge. Thielen felt like a player may have faked an injury to give his team an opportunity to see the replay and throw the flag. So he spoke his mind. Video of the interaction can be seen below…

After the game both parties commented on the interaction. “I’ve got to keep my cool,” Thielen said after the game. “But I thought it was interesting timing for a guy to go down when it was a close play that could have been reviewed.”

Asked about his perspective on the interaction, it was suggested in jest to Belichick that the two were simply exchanging holiday greetings and as only Bill can do he responded by saying, “Yeah, pretty much”.

Fast back forward to 2022 with the Minnesota Vikings snapping a 5-game losing streak to the Patriots with a 33-26 win over Belichick and the Pats on Thanksgiving night and Adam Thielen was looking to clear the air with coach. Joining the Power Trip Morning Show Friday morning, wide receiver Adam Thielen shared what he was thinking when he and Belichick crossed paths and met after the game for the first time since the incident in 2018.

“I was trying to give him a little dap up,” Thielen told KFAN. “Maybe apologize for screaming at him a few years back. I didn’t get too long of an interaction with him on that one.”

Here’s a video of the ordeal…

Apparently, there isn’t a whole lot of love lost between the two football friends. 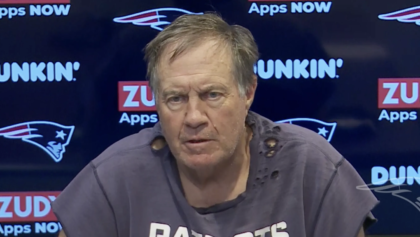 Vikings Territory Also Read:
Bill Belichick grumbling about losing to the Vikings is JUST THE BEST!