Ever since Kevin O’Connell won a Super Bowl with the Los Angeles Rams, then joined the Minnesota Vikings as head coach just a few days later, fans have clamored about the “new-look” Vikings offense. This new offense people speak of almost always entails the team having an “unlocked” version of Kirk Cousins at QB, slicing and dicing defenses through the air like he’s Maverick.

Don’t let this humble writer sway you from believes that O’Connell knows enough about football to find a way to improve Cousins’ game because he’s certainly capable of that. I just don’t believe that we’ll wake up on September 11th and struggle to determine which QB is Aaron Rodgers in Minnesota’s season opener versus the Green Bay Packers.

That said, the quarterback that Cousins was in 2021 is not bad by any means. He still threw for over 4200 yards and had 33 TDs compared to just seven interceptions. There’s no reason to believe he can’t replicate that production in 2022. He has all the same weapons as last year, a hopefully improved offensive line, and even adds Irv Smith back to the lineup at tight end.

These improvements could lead to a “breakout” season for Cousins, but the Vikings QB could put up largely the same statistical numbers as last year and still help the Vikings win games.

If you look at Matthew Stafford in LA last year, the Rams didn’t change who he was as a QB. Throughout his career, Stafford has been a gunslinging, “air-it-out” type of player who at times throws caution to the wind.

This has led to big yardage and touchdown totals, but also contributes to his 10+ interceptions in each of the 11 seasons that he has played in more than eight games, including 17 during the 2021 regular season. LA didn’t mold Stafford into some new, modern quarterback; they just put him in better situations to succeed.

Similarly, the Vikings need to put Cousins in better situations to succeed in 2022 and that begins with a coach who has bought into him. Mike Zimmer never felt like a guy who truly bought into Cousins’ quiet leadership ability, and the COVID-19 vaccine fiasco during training camp likely soured their relationship even further. O’Connell seems like he has bought in on making his offense revolve around Kirk for success. Here are just a few ways to do that.

The 2021 Vikings also had the sixth-lowest third-down conversion rate in the NFL at 36.4%. This put them at a rate similar to the New York Jets, who converted at a 36.3% clip. Certainly not good enough to win a lot of games, especially when you consider 12 of the top 15 teams in this category made the playoffs last year.

Perhaps Kirk Cousins could have been better at finding solutions on these third downs, but he wasn’t given much of a chance on these plays, either. The Minnesota Vikings had the second-most passing attempts on third downs with 11+ yards to go with 42. They were behind only the Houston Texans in this regard. Cousins attempted the most of any QB in the league with 40, per The Football Database. Stafford attempted just 18 such passes.

Much of this had to do with the fact that Minnesota’s o-line was horrible with penalties. The Vikings had the second-most offensive holding calls in the league with 26. The team as a whole also had the fourth-most penalty yards in the league at 1043. I’d venture to guess that if the Minnesota Vikings play cleaner football in 2022, they’ll be a much better team.

Pick Your Spots to Go Fast

It’s easy to think of modern offenses as machines that march down the field, running no-huddles and throwing deep passes all the time. A lot of times this is a correct notion. The Vikings actually had no problem with running a fast-paced offense in 2021, running plays every 26.97 seconds, per Football Outsiders.

It should be noted that the Vikings had 7+-point leads in 14 of their 17 games last season. The only games where they were truly beaten wire-to-wire was back-to-back games in Weeks 16 and 17 against the Rams and Packers, and then, (sigh) the Week 13 game against the Lions.

This writer wonders that if maybe the Vikings had been a bit better at some clock management when they had those leads, if a few of those games would have gone their way. Believe it or not, Minnesota could actually bear to slow down a bit in 2022.

If you want more in-depth analysis on Cousins’ skills on certain passes, check out the article Janik Eckardt wrote on this site about a month ago. That said, I’m going to focus on play-action specifically here. The 2021 Minnesota Vikings ran an egregiously low amount of play-action for having a QB as good at it as Kirk Cousins. In fact, he is the very best in the business at this throw, per Doug Farrar. Here is what the writer for Touchdown Wire had to say:

Cousins has always been an above-average play-action and boot-action quarterback, and in 2021, he completed 104 of 149 passes with play-action for 1,368 yards, 677 air yards, 12 touchdowns, two interceptions, and a league-high passer rating of 119.8. As is the case with Russell Wilson and pre-snap motion, you can certainly wonder why the Vikings didn’t use more play-action last season as a result; Josh Allen led the NFL with 240 play-action attempts. Perhaps new head coach Kevin O’Connell, most recently the Rams’ offensive coordinator, will have something to say about that.

Not too shabby. It makes sense that the Vikings would run one of the best play-action offenses in the league, considering they have Dalvin Cook in their backfield. If O’Connell runs more plays like these, Minnesota’s offense should be far improved in 2022.

The Minnesota Vikings offense wasn’t bad by any means in 2021, but there are certainly things to clean up. Kirk Cousins doesn’t escape blame for all the issues, but the Vikings could stand to put him, and the team as a whole, in better situations this year. If they improve on the areas discussed above, it might be a very fun year to watch the Vikings play football. 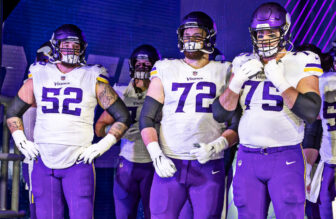