Is the excitement for the Vikings offense overshadowing concerns on defense? 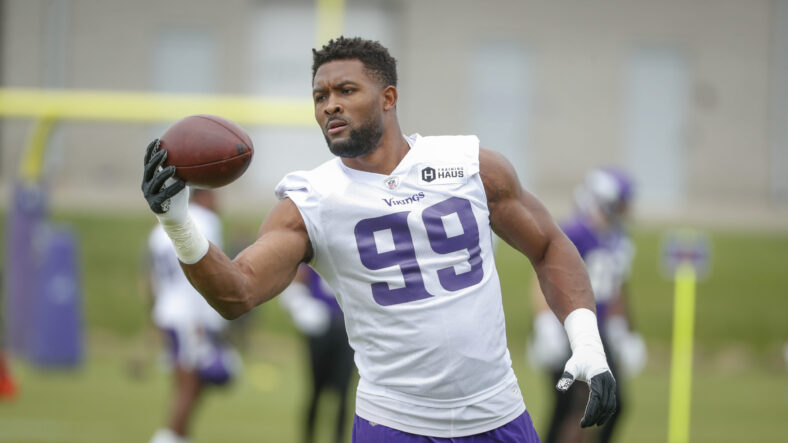 With less than two weeks until rookies report for Training Camp at Twin Cities Orthopedics Performance Center things are starting to take shape for the Minnesota Vikings…at least we think so.

The excitement for the Vikings offense and all the new bells and whistles that head coach Kevin O’Connell and offensive coordinator Wes Phillips are expected to bring over from the Sean McVay led Los Angeles Rams is palpable. Players are gushing over what they’ve been shown so far (here and here), the talk circuit in the Twin Cities is jumping on board and ready to see it first hand (see #92Noon weekdays on KFAN) and the fans are certainly following suit. Without ever taking a snap in a game it’s being presented as a “cheat code”, “totally different” from what it was, “noticeably different” from the get go.

I mean with building blocks like Justin Jefferson, Dalvin Cook, Kirk Cousins and Adam Thielen, there’s reason to be excited for an aggressive aerial assault to be installed.

The Vikings problems in 2021 didn’t stem from a stagnant offense and lack of points. Rather, their issues popped up when Cousins and crew were on the sidelines and the defense was getting worked for long, arduous drives that all too often ended in points.

Known throughout his career as a defensive wizard, former head coach Mike Zimmer couldn’t crack the code in his final season and it’s ultimately a big piece of what led to his demise. Last year the Vikings allowed the third most yards throughout the league (6,522) that turned into allowing the ninth most points to opponents (426).

Fast forward to the roster for 2022 while you might have a reinvigorated breath of fresh air to ride many of the same concerns are still present. Sprinkle in the additional concern of a switch to a 3-4 defense and nobody really knows what to expect.

Last year the Vikings saw a defensive line that was in shambles, a linebacker corps that was injury riddled and thin and a defensive backs group that saw aging DBs filling large roles and inexperienced rookies filling the others.

With the switch to a 3-4, concerns will continue to run rampant until we see the team showing signs of growth on the field. As it stands right now, the unofficial depth charts on the defensive line read Harrison Phillips, Dalvin Tomlinson and Jaylen Twyman. The unfamiliarity there is largely impacted by the switch to the 3-4 defense, but there again, we have no idea what to expect from this switch and what these players can offer during a transition period that could take two seasons before growth is shown.

Your linebackers are then Za’Darius Smith, Jordan Hicks, Eric Kendricks and Danielle Hunter. While this group seems to have the biggest names and the most excitement with it, it also has the highest level of risk associated with it for multiple reasons. First off, on the outside you have two wildcard studs. Immensely talented but recently injured with core injures that you don’t like to see for pass rushers. Smith missed almost the entire season in 2021 (16 games) and Hunter has missed a total of 26 games over the past two seasons. Additionally, ever since he was drafted into the league we’ve heard that Hunter excels when rushing out of a three point stance and has struggled out of the two point stance commonly implemented with OLBs in a 3-4. Can he make that transition and remain as dominant as he once was? Then there’s Eric Kendricks who has been thought to be too small to properly fill in as an ILB in the 3-4. If there’s anyone on roster who is capable of playing bigger than they are and proving everybody wrong it’s Kendricks. But again, until we see it, we won’t know.

Then you’ve got the backend.

Harrison Smith and Patrick Peterson are still good players, but they are also 33 and 32 years old respectively. Some people can hold it off longer than others but it is inevitable, at some point father time catches up with us all. Given the fact that the depth behind them and next to then is in a bit of a rebuild their health and high level of play is imperative to team success in 2022.

Ed Donatell may have brought two Super Bowl rings and loads of experience with him to Minnesota, but without the players to fill in the roles, his defensive scheme might struggle in year number one.

It’s this idea that is lending more and more belief to the thought that the Vikings 2022 defense will remain a bit of a hybrid between the new 3-4 and the former 4-3. It might keep opponents off balance for a little while but it’s not ideal. Over the next few years we’ll see this roster turn over to put in place 3-4 style defensive players while saying goodbye to some familiar names that might belong more in the 4-3. But for now, it’s the biggest unknown on this Vikings roster right now.

When camp opens up later this month we’ll get our first look at this Vikings defense and how they’re coming together under the new leadership. Typically speaking the defense gets off to a faster start than the offense in Training Camp but with all the transition on the table this year, that may not be the case. Either way, wins will come for this Vikings squad. They’re talented enough on offense to score points and (hopefully) skilled enough on defense not to yield endless points to opponents. But the difference between a .500 record and a playoff team might prove to be the adjustment on the defensive side of the ball rather than the offensive.