The GM’s View: Keys to the Vikings beating the Chargers 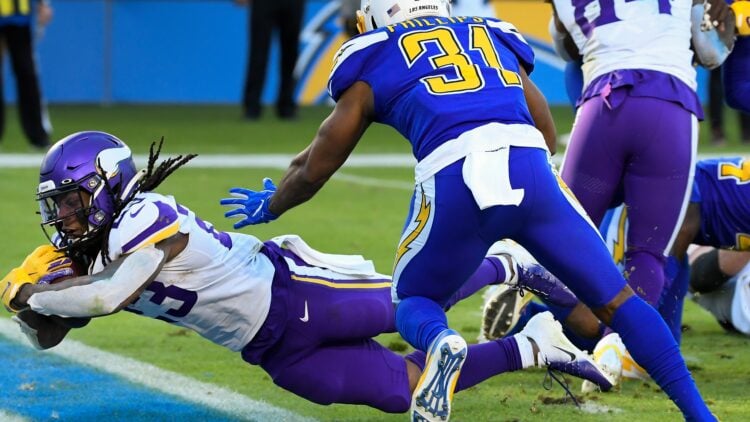 Vikings Insider, The GM’s View Keys to Vikings beating Chargers to climb back into playoff race

What a week at Vikings headquarters. Coming off a disheartening overtime loss in Baltimore where once again Minnesota had plenty of opportunities to win a big game, the Vikings are dealing with more Covid issues, assault allegations against Dalvin Cook (that he says he’ll refute) and continuing questions about offensive approach mid-game and defensive inability to shut down teams in key moments.

Up next is a west coast trip to face the AFC West leading Chargers with their potent passing attack led by last year’s Rookie of the Year QB Justin Herbert.

Coach Mike Zimmer is staying positive and pointing to the team playing hard, staying close in every game (five losses by 18 total points and 7 of 8 games down to the last play) and making big plays on special teams with Kene Nwangwu’s kickoff return TD and fake punt conversion against the Ravens.

“We have to figure out a way to teach them how to finish games,” Zimmer said. “We’re working hard to do that.”

Zimmer also can remind the team of the 39-10 win in L.A. against the Chargers two years ago that brought Minnesota to 10-4 and basically wrapped up a playoff spot. The Vikings went into that game as 2½ point favorites and forced seven turnovers including three interceptions and a lost fumble by QB Philip Rivers.

Here are my keys to the Vikings beating the Chargers in almost a must win game:
1. Run the ball: yes I know I’ve been criticizing offensive coordinator Klint Kubiak and QB Kirk Cousins for not throwing enough to their excellent wide receivers the past two weeks, but this week they face the league’s worst run defense. They may need to throw early to get the Chargers out of stacking against the run but ultimately this sets up as a great opportunity for Cook to have a big day and that in turn can set up the play action passing game that has not been in play as much recently. And an effective run game will keep the Chargers explosive offense on the sidelines as much as possible.

2. Back to Jefferson and Thielen (and let’s include tight end Tyler Conklin and third receiver K. J. Osborn in the mix), as I’ve said the past several weeks–take some shots downfield, Klint and Kirk. We’ve seen enough checkdowns short of the first down marker. Especially after turnovers, go for the big play.

Over the first five weeks, the Minnesota D was best in the league at stopping teams on third down. They need to get back to that mindset even without Danielle Hunter.

4. Study how Baltimore and New England beat the Chargers in Weeks 6; 7 which was running the ball (187 rushing yards by the Ravens and 142 by the Pats), having a big edge in time of possession and pressuring Herbert so it was tougher to get the ball to his excellent wideouts Keenan Allen and Mike Williams. Baltimore held the Chargers to 187 net passing yards and New England had two interceptions while giving up only 206 net passing yards.

Both of those defenses tried to confuse Herbert as a second year quarterback with lots of blitzes and changing coverages. Zimmer will have to be at his best in this area especially without his leader in the secondary as Harrison Smith will miss his second straight game due to his positive Covid test. Rookie Cam Bynum had a good starting debut for a rookie last week that included a leaping interception;but Smith along with top corner Patrick Peterson are certainly missed (both should be back to face Aaron Rodgers and the Packers next week).

5. Keep making big plays on special teams, Kene Nwangwu. And Greg Joseph has quietly been kicking well the past two games and needs to continue that positive trend.

Jeff’s Prediction: The Chargers are 5-3 and in the closest division race with all four AFC West teams over .500. But a game for them against an NFC opponent takes on less importance in playoff tie-breakers and I’m going with the more desperate team theory this week as the Vikings can ill afford to fall to 3-6.

So by following these keys I’m picking the underdog Vikings to run it well, control the clock and make enough plays in the passing game to beat the Chargers in another close game 30-27 on a last second Joseph field goal. A win coupled with an Atlanta loss at Dallas and a Carolina loss at Arizona puts the Vikings into the final playoff spot with eight games remaining.

Around the NFL Observations:
1. Among the biggest stories this week is Odell Beckham getting cut by the Browns and agreeing to a deal with the Rams. He’ll eventually wear out his welcome there as he did in New York and Cleveland but if Beckham stays healthy and plays well, he gives Matthew Stafford another weapon at wide receiver to go with a top pair in Cooper Kupp and Robert Woods.

The good news for the Vikings is he didn’t wind up in Green Bay (or perhaps he would’ve caused problems there too) but Beckham and the Rams do come to Minnesota the day after Christmas.

2. It will be interesting to see how Rodgers and Seahawks QB Russell Wilson perform in their expected return to the lineup when Seattle travels to Green Bay for a Sunday doubleheader matchup.

3. Surprise teams of the season’s first half are the top teams in each conference—8-1 Arizona because they are coming off an 8-8 season and 7-2 Tennessee who have beaten Buffalo, Kansas City and the Rams in L.A. If these two teams continue to stay at or near the top, it could be a battle between the Cards’ Kliff Kingsbury and the Titans’ Mike Vrabel for Coach of the Year.