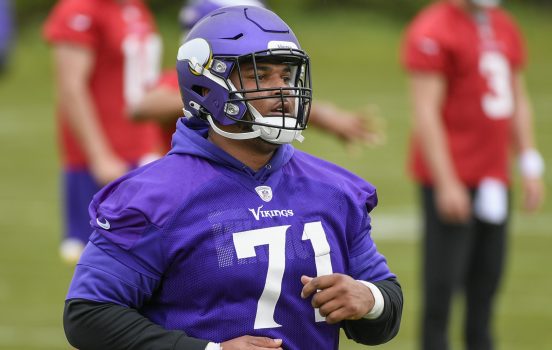 Vikings first-round draft pick Christian Darrisaw was active last week for the first time, but only played on special teams.

Riley Reiff was the team’s left tackle for the previous four seasons, but was released for salary cap reasons. The Vikings drafted Darrisaw to be his replacement not only for this season, but for years to come.

Rashod Hill has been starting at left tackle every game so far and has not exactly been lighting the league on fire. The Vikings need to see what they have in Darrisaw and the more experience he gets the better. Today they also play the Detroit Lions (0-4), a team they should beat. Why not let him play? Even if they do start Hill again, if they are up big in the fourth quarter, they absolutely should put him in. Starting him last week would have been a tall task for him given he would have faced Myles Garrett. The Lions pass rush is not very good, which is another reason to start him.

In a perfect world, the former Virginia Tech Hokie would have never been hurt and played not only every game so far, but also every preseason game and been available throughout training camp. Unfortunately that did not happen. Injuries happen all the time in this league.

Penei Sewell and Rashawn Slater were drafted ahead of Darrisaw and both have been playing very well so far. Vikings fans are very anxious to see what their tackle can do. Bryant McKinnie was the team’s left tackle from 2002-2010. Matt Kalil was drafted in 2012 to be their long-term solution. That did not work out. Reiff was good in his five seasons in purple. Can Darrisaw be their left tackle for at least eight seasons? That will be very interesting to find out. One thing is for certain though, the more playing time he gets the better idea everyone will have. Kalil looked very good as a rookie, but fell off afterwards. We do not know what the present or future looks like for Darrisaw.

Only one way to find out what the kid can do. Start him today and if he has a bad debut, they could either keep starting Hill or let their first-rounder keep learning. They definitely should start him today though.