Who Has the Toughest Schedule in the NFC North? 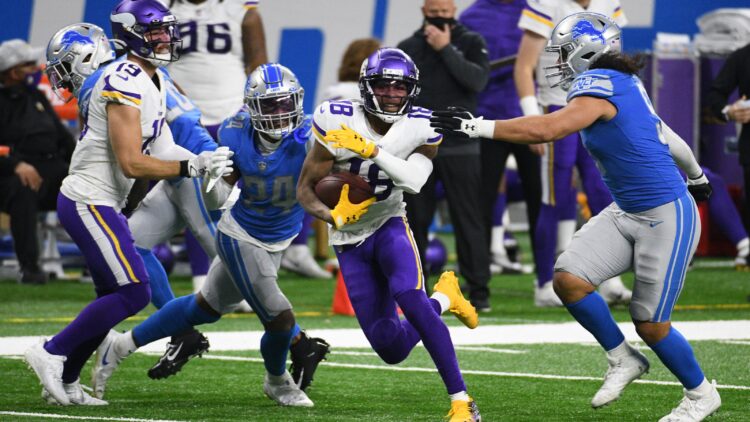 The official NFL schedule for the 2021 season dropped on Wednesday, and we now know every matchup’s date and time. As expected, the NFC North as a whole got absolutely walloped. The division is matched with the NFC West and AFC North this season; both of which are arguably the most talented divisions in all of football. In 2020, the two divisions sent a total of five teams to the playoffs. Since 2019, the only two teams from these divisions to not earn a playoff berth are the Arizona Cardinals and Cincinnati Bengals. That said, both have new franchise QBs in Kyler Murray and Joe Burrow and are expected to make jumps in 2021.

The strength of schedule (SOS) rankings confirm that the NFC North’s opponents will be an absolute gauntlet for the inauguration of the 17-game season. All four teams have an SOS of above .500 this season and rank among the seven most difficult schedules. Here is how they actually stack up in terms of SOS:

Of course, SOS doesn’t mean everything since it is based off of last season’s standings. We’ve been through a whole free agency period and draft since the last NFL game took place. So, which NFC North team’s schedule is actually the toughest?

SOS has the Bears with the toughest schedule, and there is an argument to be made that it is close. Frankly, the Bears got hosed. They have nine road games (a massive flaw with the 17-game schedule by the way), and six of them are against 2020 playoff teams. This includes a trip to Tampa Bay to take on the defending Super Bowl champions as if their schedule wasn’t tough enough.

Chicago does benefit from the placement of their bye week, though. It takes place during Week 10, essentially halfway through their schedule. It also follows a tough road matchup with Pittsburgh while allowing them to prep for a home game against Baltimore.

Let’s start with the assumption that Aaron Rodgers remains in Green Bay. If Rodgers leaves and the Packers are forced to start Jordan Love or Blake Bortles, their games get much more difficult. Given the circumstances, though, Green Bay got quite lucky with their home games. Many of their more difficult opponents will be coming to Green Bay including Pittsburgh, Seattle, LA Rams, and Cleveland.

Green Bay picked a great year to have to go to the Superdome in New Orleans as the Saints are in a transition period. The notable road games are Kansas City and Baltimore, but the Packers will get extra rest before the Chiefs game as they are coming off a TNF game the previous week. In the three weeks before their trip to Baltimore, Green Bay has two home games and a bye as well. The schedule makers were about as nice to them as they possibly could have been this year.

The Vikings have a tough start to the year. Their first two games are on the road against Arizona and Baltimore before home matchups with Seattle and Cleveland. They get a bit of an easier stretch from weeks 5-8, but then it gets harder with a four-game slate of at Baltimore, at LA Chargers, vs Green Bay, and at San Francisco.

The Vikings have back-to-back primetime weeks, but that could actually help them in the long run. They will go against Pittsburgh on short rest for a Thursday night game, and while that is about as tough a draw as it gets, they get 10 days of rest before playing Chicago on a Monday night.

There is a very real possibility that the Lions start the season 0-5. Their schedule begins as follows: vs San Francisco, at Green Bay, vs Baltimore, at Chicago, at Minnesota. Not only that, but they have two sets of back-to-back road games. The first set is at Pittsburgh and Cleveland, and the second set is at Seattle and Atlanta. Oh, and they also have to go to LA. Then they have a Thursday night game against Chicago following their trip to Cleveland. Yeah, there is no real break in Detroit’s schedule, thus I have determined that the Lions have the actual hardest schedule in the NFC North despite ranking with the easiest per SOS.