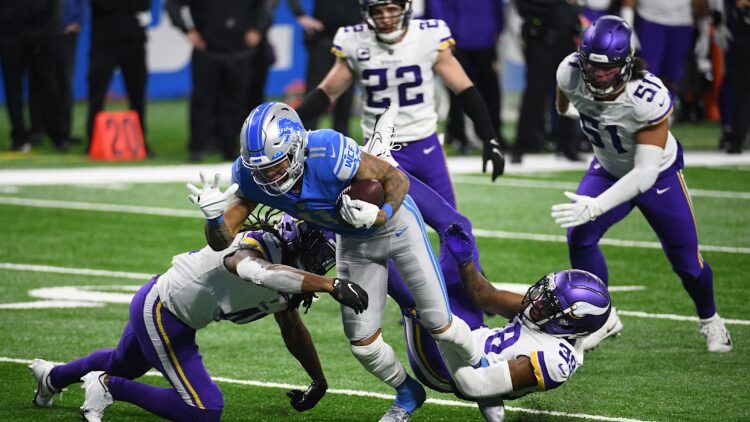 Week 4 is consigned to the history books, amid more frustration and disappointment for the Minnesota Vikings. A team whose ability to look really good and then really bad all in the same game is frankly staggering. Despite being the only team in NFC north with plus points differential, they sit with a 1-3 record. Only the 0-4 Lions sit below them. It’s the team from Detroit who comes to Minneapolis to round out this three-game home stretch. With the Vikings very much in must-win territory.

It was a narrow 14-7 defeat to the Browns, but in truth, following the opening drive that resulted in a Justin Jefferson touchdown, the Vikings never looked like a team that was going to win. The key to the game was slowing the Browns run game, something the Vikings failed to do. The Browns rushed for 184 yards. Some good defensive stands and a horrible game from Baker Mayfield kept the game close. While the defense couldn’t create a turnover, something a struggling offense desperately needed.

It started so well. Kirk Cousins led his team 75 yards down the field on the opening drive in 7 minutes and 34 seconds, connecting on a 12-yard touchdown pass to Justin Jefferson to start the ball rolling. From that point on, everything was a struggle on offense.

The offense failed to establish the run, racking up a miserly 65 yards of total rushing yards. Ten of those came on one play from wide receiver KJ Osborn. A further 17 occurred on the second to last drive, when the Vikings turned to their star running back to save the day despite the fact he was clearly struggling with his injured ankle. Unlike last week, Alexander Mattison, who carried the ball ten times, compared to Dalvin Cook’s nine, could not get going, averaging only two yards a carry.

Browns Get Consistent Pressure on Cousins

With this team, it’s a simple formula. If the run game doesn’t work, the offense doesn’t work. With the Vikings rush attack dead in its tracks, the Browns sent one of the best pass-rushing units in the league to tee off on Kirk Cousins. The offensive line couldn’t cope. Cousins had little time to do anything and became flustered. We all know how that story ends. We’ve seen it too many times.

Even double-teaming plus help from CJ Ham wasn’t slowing Myles Garrett down yesterday. Where can you go from there? The offensive line that had shown signs of improvement came up well short in this examination against an outstanding defense.

“Why didn’t they do more to help the offensive line” https://t.co/cqFibrU4Eh

Christian Darrisaw saw the field for the first time playing some special teams. The Vikings need their first-round pick ready to go ASAP.

The End to the Half Meltdown

When something happens once, you can put it down to bad luck. A second time and you have to ask questions. The repeated end-of-half meltdowns by this team need to be sounding alarm bells. Week after week, this team seems to fall apart at the end of the half. This week it was hugely costly. For everything else that happened, the final minutes of the first half decided this game.

At worst, we should have been heading in all square at seven apiece at the half. It could have been better. A harsh-looking holding call on Eric Kendricks nullified what would have been a momentous 4th down stop. Still, once the Browns did have their touchdown, chaos ensued. Starting with the former Brown Sheldon Richardson calling a time out on the field when the Vikings had no time-outs left to use. Instead of kicking the extra point to level the game, the penalty put the ball on the one-yard line. Where the Browns successfully attempted a 2-point conversion to take the lead.

In an attempt to take the lead before halftime, the Vikings didn’t run the clock down while in possession, including Ameer Abdullah choosing to run out of bounds for two yards on 2nd and 10. A five-yard penalty for a false start meant 3rd and 13 and time on the clock for Cleveland. A failed pass attempt to KJ Osborn gave the browns their chance. Still, the Browns were faced with 3rd and 20, at which point Kareem Hunt reeled off a 33-yard run and got out of bounds. What should have been 7-7 became 11-7.

Justin Jefferson put it best in his postgame interview.

Justin Jefferson: "Every loss that we've had so far has been on ourselves. We've been killing ourselves, shooting ourselves in the foot. This team is really good, but we've gotta play all four quarters."

On to the Lions

Defeat to Detroit is unfathomable. It simply can not transpire. That is the hole this team has dug themselves into. There aren’t many teams better to do it against than the struggling Lions, but don’t expect this to be a walkover. Detroit should have beaten Baltimore, but for a very Vikingsesque end to the game. They played the 49ers and the Ravens tough, but we’re comfortably beaten by their other divisional foes.

This is a game Minnesota will be expected to win and to win handsomely. That is what is needed — a complete mistake-free performance to inspire some confidence. Remember how rosy everything was after the Seattle win?

Should they do so, we can feel a little better, but it won’t solve all the problems this team has as we go forward to the much stiffer opposition ahead. This team needs to prove it can come out on the right side of close matches with good opposition. Time is running out fast.