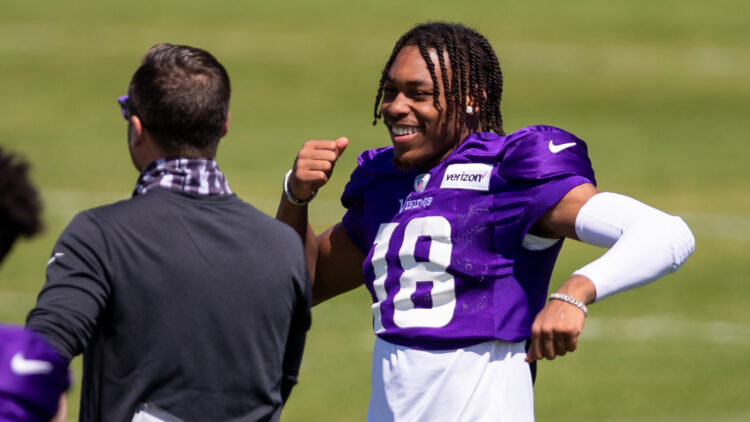 The Minnesota Vikings are scheduled to make 12 choices during the 2021 NFL Draft.

Notably, the franchise [for the moment] is deprived of a 2nd-Round selection, a derivative of the ill-fated Yannick Ngakoue trade last summer. In fairness, general manager Rick Spielman did trade Ngakoue away to the Baltimore Ravens for the above-listed 3rd-Round clawback pick when he realized the EDGE rusher was not a fit for the Vikings.

The absence of a 2nd-Rounder is crucial and damning as Spielman is a maestro in the 2nd Round. It’s the venue that has netted successes like Eric Kendricks, Kyle Rudolph, Brian O’Neill, Irv Smith Jr., and Dalvin Cook. That is a robust collection of names.

What’s more, the 2021 NFL Draft holds the highest pick for Minnesota in six years. At the 14th hole, the Vikings are in rarified territory. Spielman generally lurks in the back half of the 1st Round. But not in 2021. The 2020 season was disappointing, and the spoils of that are evident in draft capital.

So, what should you expect?

There Will Be Trades

Start getting comfortable with the notion of trading back from #14. The Vikings have roster needs on the defensive line, offensive line, free safety, and cornerback to confront. The most efficient way to maximize this draft – especially with a skimpy coronavirus salary cap – is to fortify the depth chart with rookies. Other NFL teams will call about Spielman’s interest in moving down from the present spot. That 14th selection can conceivably be flipped into two or three players. Expect the Vikings to actionize this.

Spielman must navigate his way to the 2nd Round. It’s his bread and butter. The “easiest” way to do it is to leverage the 14th pick for a slideback into the 20s-range of the 1st Round while accumulating a 2nd-Rounder. Or – he could bundle the unholy amount for 4th-Round picks into one snazzy 2nd-Round option. Either method will do the trick.

The safest prognostication to offer on Minnesota’s draft night involves moving-and-shaking. Given Spielman’s track record of trading all over the place, it would be foolhardy to believe that the practice will cease in the wacky 2021 offseason.

Two are probably busts – Treadwell and Hughes. Waynes was good – not great – for five years with the Vikings. The verdict is still out on Bradbury and Gladney.

And, this is why it is so imperative that Spielman wiggles his way back into the 2nd Round. The history is damn near Death, Taxes, and Spielman in the 2nd Round kind of stuff.

Two of Spielman’s paramount finds were unearthed in the 3rd Round or later since 2015: Danielle Hunter and Stefon Diggs. Indeed, it is not uncommon for general managers to steal good-to-great players beyond the draft’s 2nd Round, but Hunter and Diggs are different. The two men are team-defining personalities.

That’s why it is comforting to know the Vikings have 11 picks between rounds three and seven. The odds of Spielman striking oil increase exponentially as that number rises. He even found Cameron Dantzler in the 3rd Round last spring – and Dantzler was only ranked by Pro Football Focus as the NFL’s best rookie cornerback. Kudos.

It is true that the 1st Round of the draft will be to the utmost of excitement for Vikings enthusiasts and NFL enthusiasts alike, but the 3rd and 4th-Rounds will be the areas that Minnesota decides how the 2021 season will shake out.

The team – like most other franchises during this strange covid-fallout period – must draft aptly to shore up unexpected roster turnover.