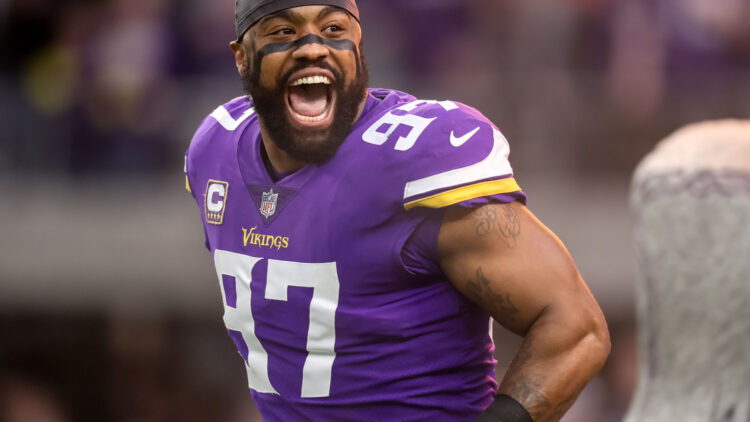 Note: This article originally appeared on our sister-site, PurplePTSD.com. Everson Griffen played for 10 seasons with the Minnesota Vikings, and if you believe the Twitter account ‘NFL Rumors,’ the EDGE rusher might be heading northward again.

#Lions Free Agent DL Everson Griffen expected to be targeted by #Vikings his former team. There is mutual interest we are told for the right price.#NFL #nflrumors

The knee-jerk tendency is to deride this account as it is not sponsored by the NFL or a credible face. However, the outfit does have 34,000 followers and is not a total bastion of garbage. Too, the very definition of a rumor lies in hearsay and speculation, so the account is merely living up to the billing of a textual definition of its title. NFL Rumors has been correct at times — NFL Rumors has been wrong. Rumors are rumors. And, for now, Griffen is again linked to the Vikings. When the Detroit Lions season capped in 2020 (Griffen’s previous employer), the 33-year-old promptly began a social media flirtation with returning to Minnesota in 2021. But that was marred by antics. Griffen has a documented history of whimsical, offensive tweets. Foremost, it seemed that he welcomed a Vikings reunion. Soon after, he tweeted-the-deleted that current Minnesota quarterback Kirk Cousins was “ass.” Not a good look. Then, he reneged and apologized, ushering in a three-month-long period of Twitter silence. This was his last tweet:

Drafted by the Vikings in 2010, Griffen remained with the franchise for a decade before a 2020 exodus — along with several other mainstay defensive figures on Mike Zimmer’s depth chart. He landed with the Dallas Cowboys via free agency, playing seven games in Texas. At the season’s midpoint, Dallas dealt Griffen to Detroit for a 6th-Round draft pick, briefly reacquainting him with ex-Viking, Adrian Peterson. Between both 2020 stops, Griffen tallied six sacks on 528 defensive snaps (or about 50% of a normal team’s defensive plays). That’s a respectable total for a pass rusher in his 30s. Griffen is a free agent. While reuniting with Zimmer’s defense in 2021 is certainly not mandatory for a re-tooled Vikings bunch, he would effectuate familiarity — especially for Danielle Hunter. Hunter is returning from a 2020 campaign in which he played zero games due to a neck injury. The tentative plan at right defensive end is an audition of Stephen Weatherly, a player that left Minnesota in the same offseason as Griffen. Weatherly jaunted to the Carolina Panthers for one season, failed to make a substantial impact, and returned to Minnesota — a pathway Griffen may duplicate if NFL Rumors is accurate. Otherwise, Zimmer could explore playing time for these defensive ends, all of which are currently on the Vikings roster: D.J. Wonnum, Patrick Jones II, Jalyn Holmes, Janarious Robinson, Jordan Brailford, and Kenny Willekes. Call it a full house. Amid the last 30 years for the Vikings, Griffen ranks third in sacks behind John Randle and Jared Allen. The offseason is nearing its midsection, so a Griffen deal could happen today, it could transpire in early September, or somewhere in the middle. The financial figures are unclear, and Griffen would likely have to smooth out relations based on his bizarre tweets a couple of months ago. What’s more, other EDGE rushers are available. Ryan Kerrigan, Melvin Ingram, and Justin Houston are all searching for 2021 employment.