For Vikings, Harrison Hand Wins the Month of June 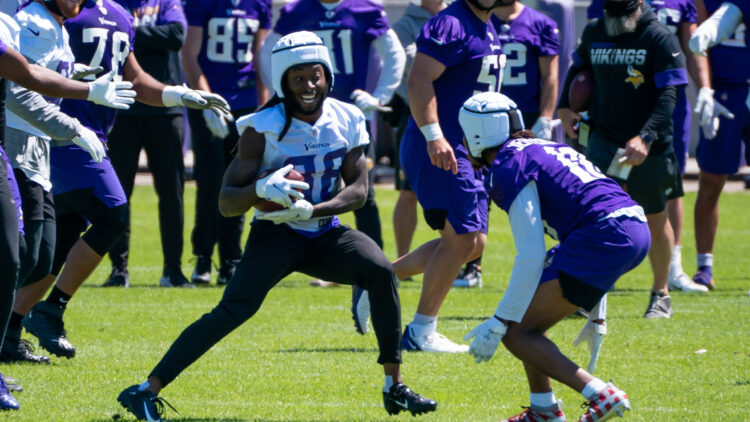 In a month that hosted the temporary resolution to Danielle Hunter’s contractual standoff with the Minnesota Vikings, that event will serve as the summer’s most influential story – barring unforeseen injury to a player like Kirk Cousins, Dalvin Cook, or Hunter himself.

Hunter will remain with the Vikings at least until the end of 2021, avoiding any holdout that was long theorized since an article from The Athletic hinted at the notion. Now, Hunter is in camp and fully committed to the 2021 season. Next spring will act as a time of judgment for his long-term prognosis with the franchise (if no in-season extension materializes).

On the whole, though, Harrison Hand, a second-year cornerback, won the month of June. And he did so with the on-the-field performance – not contractual, emotional relief (Hunter), or a splashy addition to the roster (Breeland and Richardson).

Hand was tremendous at June’s minicamp. There’s no other way to dice it. The Temple alumnus showed bits and pieces of promise in 2020 – a season that lacked just that roster-wide during the pandemic – with an astute tackling acumen and propensity for making big defensive plays. Those two items are of the utmost importance for a young defender.

Minicamp was a forum for Hand to prove those ‘moments’ of brilliance [particularly on Christmas day against the Saints] were not “every dog has its day” types of occasions. If minicamp is meaningful [it usually is] and in-game performance versus the Saints on the road holds weight [it does], Hand is on his way to forcing the Vikings hand (appendage?) at the cornerback position in terms of playing time.

The room is crowded.

By wowing when given the opportunity – something he has a knack for.

His ascension was recognized by others, not just Vikings enthusiasts. ESPN reporter Courtney Cronin witnessed Hand’s doings and nominated him as the ‘surprise player’ for Vikings minicamp. She wrote on Hand:

“With Jeff Gladney absent amid legal issues and Cameron Dantzler sidelined with an apparent injury, Hand, a former fifth-round pick, got a lot of reps with the first-team defense in OTAs and minicamp. He came away with a couple of interceptions. The Vikings moved Hand around as an outside corner and even lined him up in the slot, which should help his chances for making the roster this fall. The secondary looks a lot different this year. While Dantzler (if healthy), Patrick Peterson and Bashaud Breeland will be the front-runners to earn starting jobs, Hand’s strong spring showing could put him in line to duke it out with Kris Boyd for one of the final spots on the depth chart.”

As a merchant of unexpected production, Hand is on a trajectory to see playing time in 2021 – especially if the injury bug strikes again. A late-round draft pick can only be allowed to inhabit that title for so long before a coach verifies that he is the real deal. Hand is getting close.

If he does rise to a CB1 or CB2 in time, he will help correct the record of general manager Rick Spielman’s 5th-Round track record. Outside of Stefon Diggs in 2015, the 5th Round has been underwhelming for the Vikings amid the last decade. Letroy Guion, Jasper Brinkley, and Diggs are the only 5th-Rounders drafted by Minnesota since 2007 to start in more than 20 games with the team.