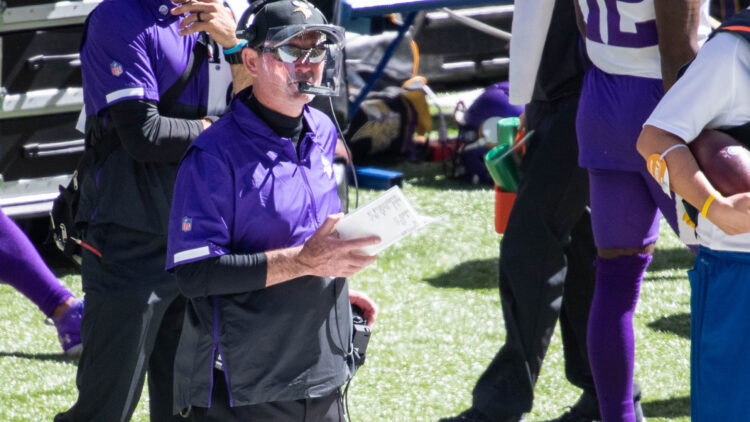 In the seven seasons preceding the arrival of Mike Zimmer to the Minnesota Vikings (2007 to 2013), the franchise placed as the NFL’s 21st-best team via wins and losses. For those first seven years of the Adrian Peterson era, the Vikings finished 54-57-1 (.487) or 12th-worst in the business.

Zimmer arrived in 2014, altering the culture and style of play. With his tutelage, Minnesota has been the NFL’s eighth-best unit, winning 57.6% of all football games — more than the Dallas Cowboys, Philadelphia Eagles, and Indianapolis Colts in the timeframe.

It is truly bizarre.

Oddsmakers are not buying into the even-year voodoo, however. Vegas foreshadows the Vikings as an 8.5-win team. More specifically, Zimmer is the target of “hot seat” chatter. Per BetOnline.ag, Zimmer is the fifth-most likely head coach to get axed heading into the 2021 campaign. Only Mike McCarthy of the Dallas Cowboys, Vic Fangio of the Denver Broncos, Matt Nagy of the Chicago Bears, and Jon Gruden of the Las Vegas Raiders are more likely to be canned than Zimmer, per BetOnline

Indeed, 2021 is a pivotal season for Zimmer and the Vikings. But that’s not limited to Zimmer. The litmus test probably applies to quarterback Kirk Cousins, too. By the end of 2021, the Vikings management and fanbase will know beyond the shadow of a doubt — after four full seasons — if Cousins is worthy of another extended chapter with the organization. Hell, general manager Rick Spielman could be in trouble if the Vikings season goes miserably.

For what it’s worth, there is no reason to believe that the Vikings will encounter another bout with mediocrity. Last season was marred by injuries to essential defensive personnel. Those men are slated to return in good health for 2021.

Minnesota spent the first part of the offseason bolstering the defense — a unit that was sickly in 2020, surrendering the fourth-most points in the league. In direct response to that malarkey, Spielman signed via free agency Patrick Peterson, Dalvin Tomlinson, Xavier Woods, Nick Vigil, Mackensie Alexander, and Stephen Weatherly. Then, players like Danielle Hunter, Anthony Barr, Michael Pierce (COVID opt-out), and Eric Kendricks will return from mass absence in 2020. In this regard, the 2021 defense will feel totally different and revamped.

The offense will feel familiar. Kyle Rudolph and Riley Reiff were the noteworthy departures while head coach Mike Zimmer will hope to build on an offense that ranked third in the league via yards gained and 11th in points scored. New offensive coordinator Klint Kubiak — who replaces his father, Gary — will have plenty of tools to play around with during his rookie season. Many onlookers yearn for youthful creativity on offense — and Klint Kubiak isn’t very old. He could marry both worlds of the Zimmer-style offense and sprightly playcalling.

Too, the draft created newfound optimism on the team’s offensive line because two presumed starters — Christian Darrisaw and Wyatt Davis — were drafted during the draft’s first two nights. Darrisaw and Davis are slated to outfit the Vikings offensive line, barring an unforeseen change of plans or training camp injuries. In each draft since 2018, general manager Rick Speilman has poured high draft capital into the offensive line (O’Neill, Bradbury, Cleveland, Darrisaw, and Davis), so success better be on the horizon.

All in all, Zimmer probably needs a playoff win to coach the team after 2021. That theory is not ironclad, but it is a sensible one. Just getting to the postseason — and losing immediately — would generate a stale aura throughout the organization (one of which some folks believe exists now).