A Rooting-For Guide for Vikings Fans in Week 14 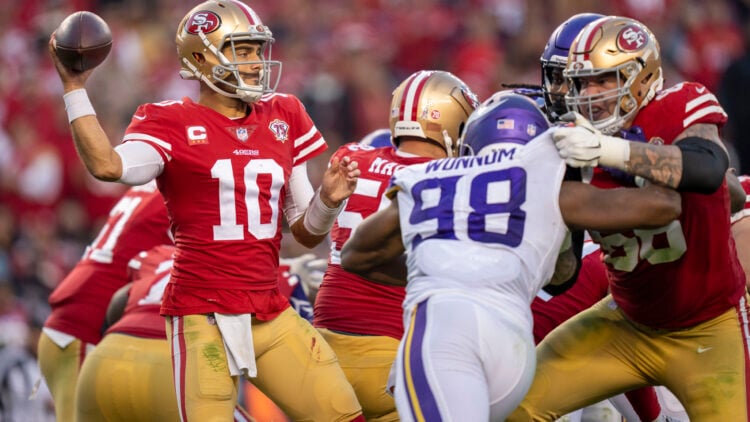 The Vikings took care of business (if you can call it that) on Thursday Night Football against the Steelers, and now we get an 11-day rest from the trauma of Vikings games.

But that doesn’t mean we can’t enjoy some football while the Vikings are on their brief sabbatical, as Week 14 in the NFL is action-packed with high-quality, competitive games.

So, while watching these great games this Sunday, who should you root for? Who needs to win and who needs to lose to help the Vikings inch closer to a playoff spot they don’t deserve?

Well, that’s what I am here for. In this article, I will preview every Week 14 game and let you know who you should root for and how much that game matters for us as Vikings fans.

I rank the importance and competitiveness of these games on a scale of one through three, with a higher score meaning the game is more competitive and that the game has a more significant impact on the Vikings playoff chances.

If you are in a hurry, here are the top games from each time slot, based on both competitiveness and importance to Minnesota. All times are CST.

If you already know which games you will watch and want to see which teams you need to be rooting for, scroll through to those specific games. All games are sorted in chronological order, from the noon games all the way through to MNF.

This matchup features two struggling teams pitted against each other in what will probably be a relatively dull game. If you do tune in to this one, we want the Jets to win as the Saints theoretically are competing with the Vikings for a wild card position, but as the Saints have been ravaged by injuries, they aren’t a substantial threat.

This game is likely going to be reasonably interesting, and if you haven’t taken the time to watch the multi-position wonder, Cordarrelle Patterson, this season, it might be worth it to tune in. We technically want the Panthers to win since Atlanta (like the Saints) is technically competing with Minnesota for the playoffs, but like the Saints, these Falcons aren’t too much of a threat. So, I won’t blame any Vikings fans if they root for Patterson’s squad.

Honestly, don’t watch this game. I don’t care if nothing else is on TV where you are. There is no reason to tune into this game. If you do tune in, I guess we want Houston to win? But it really doesn’t matter; Seattle’s season is over regardless. But this game will be hideous and boring, don’t waste your time.

This game will also likely be boring and does not matter for the Vikings. But it’s always exciting to watch the Chiefs’ offense, and both sides have some exciting playmakers.

Now this game should be interesting. The Browns are at home and playing for their playoff lives in a divisional battle against the Ravens (who lost last week to the Steelers). This game may not be pretty for the eyes, as both offenses have had severe struggles in recent weeks, but it should be a close and exciting affair. This is another AFC clash, and as such does not matter for the Vikings one bit. But if you tune in, don’t let that stop you from choosing a team to root for, since this will likely be a fun and exciting clash.

Here we get to the first game that really matters for Minnesota, and if I were you, this is the game I’d watch out of the 12pm slate of games. Washington and Minnesota are neck and neck in the race for the seventh seed, and this game is likely to be very competitive. Washington has been surging lately while Dallas has struggled. Dallas handing the Football team a loss here would be huge for Minnesota’s playoff chances, so if you tune into this game, you need to be a Dak Prescott/Kellen Moore/Ceedee Lamb fan.

Another game likely to be very boring for both Minnesota and NFL fans in general. Technically, we want Detroit to win because of yadda-yadda tiebreakers, but blah-blah whatever. This game does not matter.

Another boring game, but it may be worth it to check the box score for this game on occasion to see what type of stats Herbert and Co. are putting up for the Chargers. Also, the Giants aren’t technically eliminated from the playoffs yet, so we want the Chargers to win.

This game features the highest combined Importance plus Competitiveness score of any game this week, featuring a 3 out of 3 in each category. We want (need) the Bengals to win this one, and it should be an exciting game regardless, as this is a matchup between two fringe playoff teams with tons of talent on both sides of the ball.

This game doesn’t matter to Minnesota, but if you want to watch great football, this will be a matchup to watch. Brady vs. Allen, Bucs defense vs. Buffalo defense, this game is sure to be exciting. The Bucs are playing for the #1 seed and a first-round bye, while the Bills have struggled in recent weeks and need to win this game to stay safe in the playoff race.

Unfortunately, this week’s slate of good games did not extend to SNF. The Green Bay Packers are huge favorites in this one, so if you don’t like watching Packers blowout victories, you should probably find another way to spend your Sunday evening. Technically, we want the Packers to win (eww, I know), but it doesn’t matter either way since Chicago’s season is on life support anyway.

Week 14 closes with an exciting showdown in the desert between two teams that will likely be playing in January. If the Rams want any chance at winning the NFC West, they absolutely need this game, while the Cardinals want to win to stay ahead in the race for the pivotal #1 seed. Since there is still a chance of the Vikings passing the Rams in wildcard position (not a good chance, but it exists), we should be Cardinals fans this Monday.

Overall, this week provides some entertaining and personally compelling matchups for Vikings fans at every time slot. If you plan on using the Vikings’ 11-day break to take a vacation from the NFL — I don’t blame you — but if you are watching the games this week, now you know who to root for.