Larry Fitzgerald Jr. is in Minnesota today…DON’T LET HIM LEAVE!!!! 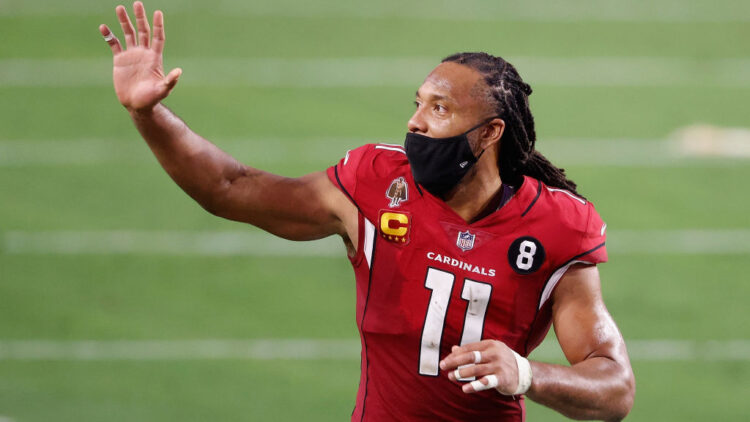 GLENDALE, ARIZONA – DECEMBER 26: Wide receiver Larry Fitzgerald #11 of the Arizona Cardinals reacts to fans as he walks off the field following the NFL game against the San Francisco 49ers at State Farm Stadium on December 26, 2020 in Glendale, Arizona. The 49ers defeated the Cardinals 20-12. (Photo by Christian Petersen/Getty Images)

Last time I checked, the Minnesota Vikings are still in need of a wide receiver three.

Yeah they’ve got Adam Thielen, sure Justin Jefferson had a bust out season setting NFL rookies last season. But then what, what’s behind them?

Wide receiver #3 has been a need for the Minnesota Vikings since the 2020 season wrapped and they started assessing the roster and moves they could make during the offseason. Still, here we are on June 14th…after free agency opened, after the draft came and went and in the midst of the depth filling free agency fillings they still appear to be looking for their WR3.

To be fair, I understand that there are options on roster for that spot. Most accounts claim that Chad Beebe is having a good camp so far, yeah Bisi Johnson is fighting for a bounceback after fading last season and yes, I’m aware that Ihmir Smith Marsette is a promising draft pick.

But I’ve got a better option, an ALL-PRO option AND HE’S IN MINNESOTA TODAY!!!

That’s right, it’s been a pipe dream for Minnesota Vikings fans for the last ten years, could this be the year that Larry Fitzgerald Jr. signs with the hometown team? He became a free agent for the first time in his career on in the middle of March and is still on the market three months later.

And as mentioned above, he’s in Minnesota today!! 😲😲😲

Sure, it’s not exactly for a free agent visit with the Vikings, rather he’s in town for his charity golf tournament at Interlachen, but why couldn’t he act like everybody else and take care of multiple pieces of business while you’re in town. If they haven’t already, the Vikings should at least kick those tires and reach out.

Even late in his hall of fame career, “Larry Legend” was productive as a member of the Cardinals in 2020. In an interesting, not exactly pass first offense, he finished the season with 54 catches, more than 400 yards and a TD, but more importantly. He’s the prototypical wide receiver that the Vikings could use. A big bodied, strong, sure handed wide receiver that can go across the middle and reel in some tough passes.

He appeared in 13 games last season so there’s still some durability despite all the miles he’s put on his body and hits that he’s taken over the years.

There are reports that he’s willing to hang it up and retire before the upcoming season, but if he’s interested in giving it one more year, coming full circle to the team with which he served as a ball boy in his youth, I know a good landing spot.

And heck, he could sign the contract TODAY if he wanted to!