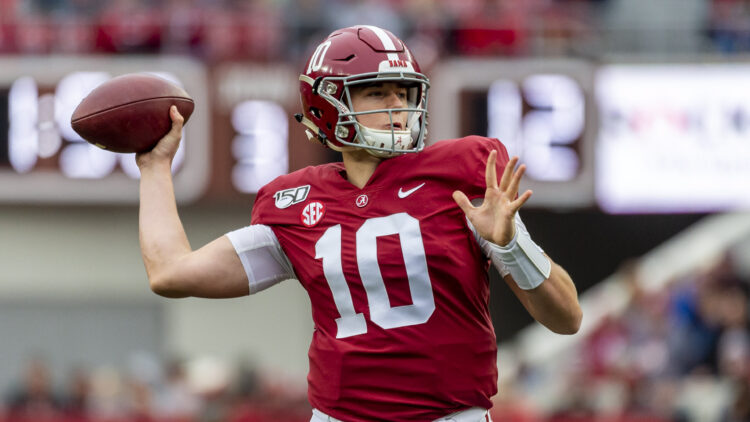 Alabama quarterback Mac Jones (10) throws the ball against Western Carolina during the first half of an NCAA college football game, Saturday, Nov. 23, 2019, in Tuscaloosa, Ala. (AP Photo/Vasha Hunt)

Yesterday we looked at BYU’s Zach Wilson and what he would look like if the Vikings snagged him in the 2021 NFL Draft. Once again, we are operating under the pretense that Minnesota has moved their current quarterback Kirk Cousins and acquired the necessary first-round pick to select their new franchise guy.

With Zach Wilson, I said that he is more Teddy Bridgewater than anything else. If he is Bridgewater, then Alabama’s Mac Jones is Kirk Cousins. Both are 6’3” and 200-215 pounds, and both have very similar play styles.

Where Jones has Cousins beat, so far at least, is his success at the collegiate level. In three seasons for the Crimson Tide, Jones racked up 6126 passing yards, 56 touchdowns to seven interceptions, and a completion rate of 74.3%. He also is coming off an undefeated season, national championship, the Davey O’Brien award for the best QB in college football, first team All-American honors, and finishing third in the Heisman voting.

When you watch him on tape, he’s extremely talented with his arm. He can make any throw on the field, including some of the best deep balls in college football this season. He genuinely reminds me of Kirk Cousins and how he throws a beautiful deep ball with near perfect mechanics, when given time to throw at least.

Jones’ transition to the NFL should be a smooth one, from a mental standpoint at least. Playing for Nick Saban, he played in the top pro-style offense in college football. He doesn’t make mistakes and plays perfectly on-schedule and on gameplan.

However, he hasn’t faced a ton of adversity in the college game. Having that great line in front of him, he looks incredible. When he’s forced to scramble and play off-schedule, he tends to look a little like a newborn deer with unsure legs. This is partially because he lacks mobility and won’t outrun any but the slowest defensive linemen, and the aforementioned inexperience with dealing with that pressure.

To be clear, I don’t think he won’t be able to handle pressure, but he’ll do much better if he goes to a team that doesn’t have a poor offensive line. So, the Vikings would need to significantly improve their offensive front to effectively use a guy like Jones who is a pure pocket passer.

If the Vikings want to get Jones, they could likely wait until their pick at 14. Jones is going anywhere from about where Minnesota is picking to as far back as the New Orleans Saints at 28, or even falling out of the first round. It seems that the most popular projection for him however is at 19 to the Washington Football Team.

Like I said, I see a lot of Kirk Cousins in Jones. This is both good and bad. Cousins throws one of the nicest balls in the NFL, and Jones has that ability as well. However, both tend to have issues with pressure, with Jones likely worse off than even Cousins is with his real lack of mobility.

Jones is likely pro-ready, but only to be a game manager on a team like the Vikings. He’s not going to move around and play off-schedule like BYU’s Wilson. He’s also not going to make the mistakes that Wilson will make due to being over-aggressive. The Vikings line isn’t ready to make a guy like Jones succeed, at least not next season. If the Vikings want Jones to be their next guy, they shouldn’t do it in lieu of Kirk Cousins. Take a couple more years, fix the offensive line, and then let Jones loose if that’s what you want. Expecting Jones to carry a team with a poor offensive line is going to crush him at this point in his career.