New Number on the Minnesota Vikings

The free agency rumors have dialed down. Viking fans continue to wait patiently on the edge of their seats. Eagerly anticipating the announcement of the signing of an offensive lineman. Sorry, not just a lineman, an average or above-average one. Until then, we most likely will not see a new man on the Minnesota Vikings.

However, we could be seeing some new jersey numbers on the Vikings. In the next month or so, NFL owners will meet and vote on numerous proposals and rule changes. The Chiefs continue to stay innovative and have proposed a rule change that would allow wide receivers, running backs, tight ends, linebackers, and cornerbacks to wear numbers that would include single digits.

If the rule were to be passed the changes would be as follows:

The rule itself has yet to be approved, but that hasn’t stopped Viking fans from concocting photoshops.

Dalvin Cook is certainly on board with his potential new number.

Looks like Dalvin Cook would be down to go back to his college #4 if the Chiefs’ jersey number proposal passes 👀 pic.twitter.com/jCorjFaHpH

Cam Dantzler gives us a tease. 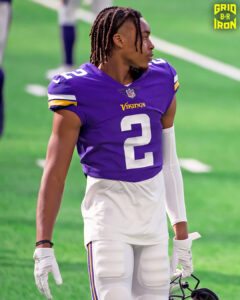 Fans had fun with our MVP (joking), Dakota Dozier.

I agree Luke! Dozier is gonna look so BA when they finally relax the jersey number rule for everyone 😈 pic.twitter.com/9vWjdFiPjV

An underrated aspect is we now get to see Chad Beebe in a much more appropriate number. pic.twitter.com/ZmO3vR8aTK

Potential Vikings draft target is cool with the rule change.

A possible corner target in the draft mentions honoring the late Kobe Bryant.

Alvin Kamara repping how many touchdowns he scored against the Vikings, which just so happens to be his college number.

The 49ers engaged in some negotiating.

Whether this becomes a reality will remain a mystery until next month. Until then, one can only hope we get to see an offense featuring #2 and #4 (JJ and Cook).