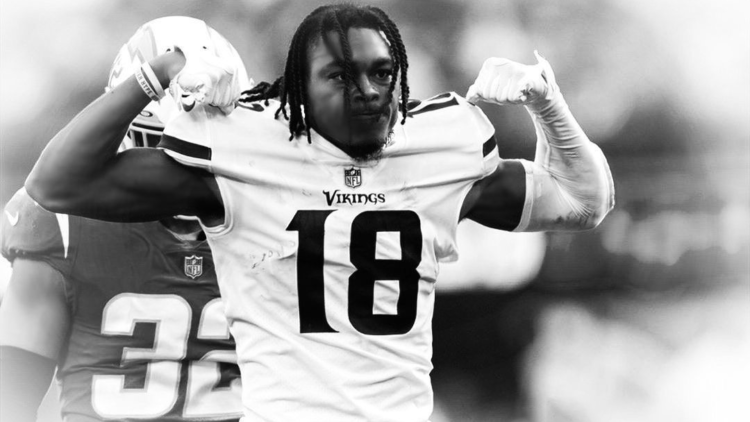 You’ve heard of this Randy Moss guy right? The “Super Freak“? The “Mossiah“?

You know, 1998 Offensive Rookie of the Year, 2x appeared in the Super Bowl, Vikings Ring of Honor Member, one of the 50 greatest Vikings, Hall of Famer…yeah THAT Randy Moss.

Do you also remember when he took the league by storm back in 1998? Odds are you saw that Moss Thanksgiving Meme circulating just this last week highlighting his 3 catch, 163 yard, 3 touchdown day against the Cowboys that year. Moss went on to finish his rookie season with stellar numbers including 69 catches for 1,313 yards and 17 touchdowns. One of the best rookie wide receiver seasons the NFL has ever seen.

If you’re visiting this site and reading this article you’re also likely a Vikings fan, so odds are pretty good that you remember just last year and Vikings wide receiver Justin Jefferson blew by Moss’s rookie season with 88 receptions and 1,400 yards of his own, a new Super Bowl era NFL record for rookie receiving yards.

Well, we find ourselves in a familiar position again this week in San Francisco as Jefferson is once again on the cusp of zooming past one of those impressive Randy Moss start to a career numbers. In the first two seasons of his career (’98-’99), Moss posted 11 games with 100 or more receiving yards. It took him 32 games to reach that milestone.

With his 169 yard day last week against the Packers, Justin Jefferson has now posted 11 such games himself with 100+ receiving yards! He did it in just 26 games!! That puts him in some serious rarified air!

There’s also some big name wide receivers who also got off to blistering starts that he flew past along the way like JuJu Smith-Schuster (11), T.Y. Hilton (10), Julio Jones (9), Amari Cooper (9).

The “Super Bowl Era” record belongs to Odell Beckham Jr. who opened his career with 15 100+ yard games in his first two seasons, and the all-time record belongs to Bill Broman who saw 16 such games come his way back in the 60s.

With 7 games left on the season and a full-court press on for a playoff push, Jefferson has a shot at eclipsing some of those numbers as well! JJ averages 112 yards per game against the Lions and Bears whom the Vikings will see 3 more times this season. There’s also a couple games that are primed for a shootout, namely today’s matchup with the 49ers and then the Rams and Packers games. He’s gonna give it a good shot at reaching OBJ and Broman before this thing comes to an end.

That 17th regular season game this year also helps his case as well.

All of this to say, we all love #18 out there for The Purple, but I’m still not sure we’re fully appreciating how special what he’s doing is.

Also Read: The Handsomely Paid Vikings QB Might Have to Win Another Shootout on Sunday