Closing Arguments on the Vikings Preseason

Henrique Gucciardi   |
Aug 27, 2021; Kansas City, Missouri, USA; Minnesota Vikings quarterback Kellen Mond (11) picks up his helmet after it gets knocked off against the Kansas City Chiefs during the second half at GEHA Field at Arrowhead Stadium. Mandatory Credit: Denny Medley-USA TODAY Sports

Under Mike Zimmer, the Vikings were used to doing well in preseason games. This year, however, things were different.

The first game debacle is kind of understandable, with Zimmer resting 31 players. Yes, our backups were horrible, but, after seeing the other games, I believe they were really rusty. The second game was probably our best out of the three – offense apart. Our defense played lights out (yes, I know this is preseason, just let me overreact a little), we got a glimpse of what our trenches could look like and the special teams unit had their best games in ages. Greg Joseph missed a field goal, but hey, it wouldn’t be the Vikings if we hit FGs. The backup offense found a rhythm against the Chiefs, so they at least go into the season on a not-so-low-note. 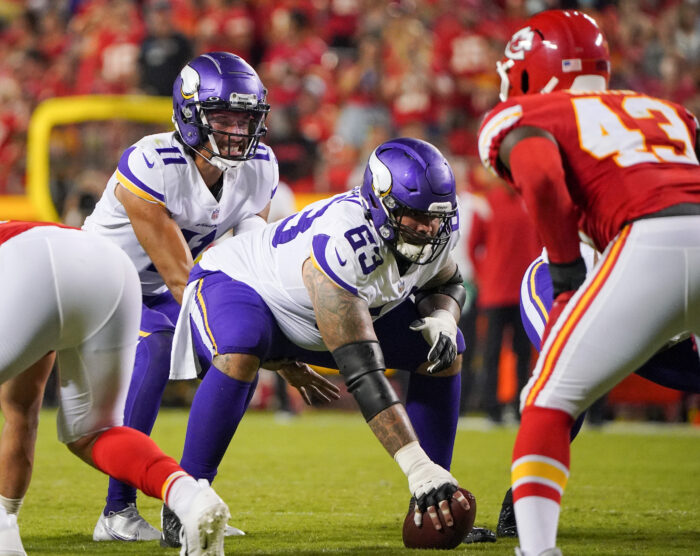 The Minnesota Vikings have really high expectations this season, and we all know why. The offense was great last year, and the team invested in the offensive line once again. Darrisaw, our first-round pick, will theoretically be healthy by week 1, but the team will be cautious with him. Davis was a third-rounder, but, as a former All-American, he clearly possesses the talent to be a guard in the NFL. However, one of the biggest surprises of camp – if not the biggest – earned the starting job. Oli Udoh received tons of praises after sliding inside and secured the right guard spot. If Rashod Hill can hold (please not literally) his own until Darrisaw is good to go, the OL should be much better. On the other side, the defense got a ton of new faces, and this revamped unit has everything it needs to be great again.

These thoughts aren’t all bad or good, just things I saw watching those three games. Let’s go to them.

Depth at Some Positions

This is something I already mentioned during my post-week 1 game overreaction, but it still rings true. At the same time we have great depth at running back, defensive line, and, at least to me, wide receiver, we’re screwed if we miss a safety for a couple of weeks, e.g. At most positions we looked a little thin, like tight end, safety, and, of course, offensive line. Quarterback is one too, but it will have its own section.

Since I spoiled this topic, let’s get to it now. Kirk Cousins is at least a borderline top-10 QB and never missed a game. However, COVID brings another perspective to roster management. The fact that Kirk is not vaccinated, and probably won’t be, only makes matters worse because of the NFL protocols. We already missed him for a few days when Kellen Mond tested positive and the only QB vaccinated was Jake Browning. Speaking of him, he was the favorite to win the backup spot after that Saturday practice, but now he may lose his spot on the team altogether. He played poorly in all three games, and, depending on who gets cut Tuesday, the Vikings may bring a veteran to back up Cousins. Kellen Mond is a good project, but preseason also showed he’s not ready yet. 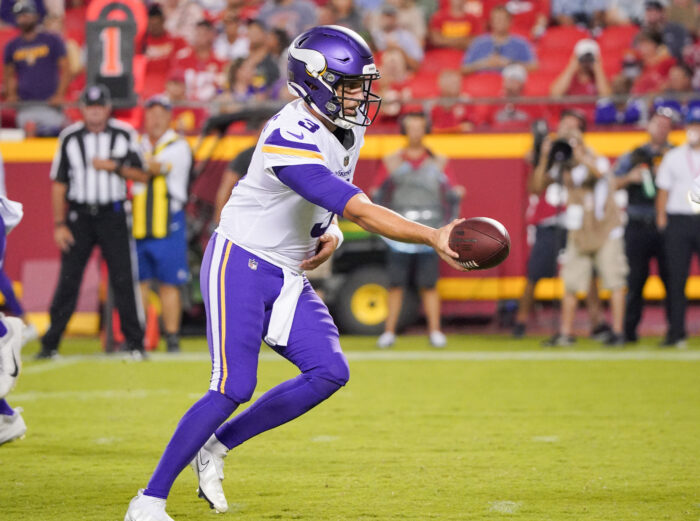 C’mon people, this wouldn’t be the Minnesota Vikings without kicking woes. Greg Joseph won the job with literally no competition – Riley Patterson was injured basically the entire time. And he can lose the job also with no competition. He struggled in the games, hitting only one attempt longer than 35 yards and missed both 50+ kicks. I wouldn’t be shocked if Zimmer looks around to see who’s available, but, hopefully, Joseph’s mishaps were only during the preseason or we sign a good kicker. We can’t have another season with bad kicking.

After the Colts game, I thought the special teams were going to be just like last season’s. I hope I was wrong because the unit massively improved after that. The punting and kicking coverage looks better, Colquitt punted like it was 2019 and we were able to flip the field position. If Ryan Ficken can keep this throughout the season, we should be fine.

This was well known after the Dalvin Tomlinson signing, but this defense may end up as the number one against the run. Pierce and Tomlinson are as movable as a mountain, leaving Eric Kendricks to just flow to the running back. Even if Barr has to miss some games with his undisclosed injury, our defensive line is good enough to make whoever substitutes him sustainable.

I decided to not put the offense here for a couple of reasons. First, two of our three best players didn’t play a down, and Thielen didn’t play many against the Colts. Secondly, I hardly believe Klint Kubiak was using the plays he has for the regular season, so it was a not full-strength offense with a simplified playbook. If these woes translate to the Bengals and Cardinals games, then we should get worried.