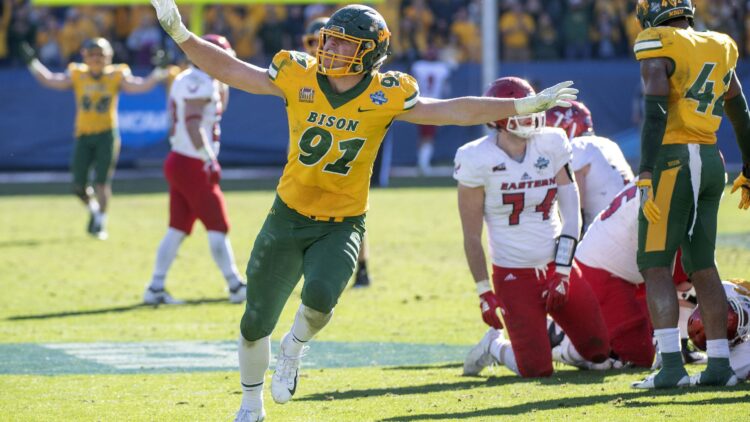 Every year, there seems to be a few local prospects that get everybody whipped up into a frenzy. Last season, it was Blake Cashman. This year it’s Antonie Winfield Jr and Tyler Johnson. Winfield would be a Minnesota Vikings legacy whose father was one of the best and most consistent corners in purple from 2004 to 2012. Johnson is a Minneapolis native and one of the most prolific receivers in Gopher history.

Despite these two’s successes, including bringing the gophers their most wins in over 100 years, there is another local player to maybe be even more excited for. Derrek Tuszka is a Warner, South Dakota native and one of the newest NFL hopefuls to come out of the prolific North Dakota State University Football program.

Over four years at NDSU, Tuszka collected 29.5 sacks, 42 tackles for loss, 133 total tackles (73 solo, 60 assisted), and six passes defended. He was awarded a long list of honors including 2019 All-Mountain Valley Football Conference first-team honors, 2019 MVFC Defensive Player of the Year, and 2019 FCS All-American honors. Over his four years for the Bison, the team went 57-3, and won three national championships, all coming with Tuszka as a starter.

When you watch the tape on Tuszka, you see his athleticism allowing him to dominate his opponents. The first step is extremely explosive, and he’s able to speed rush past most anybody he faced at the college level. He doesn’t have much of a counter yet, but he has the speed to stunt around from outside to inside and get a free run at the quarterback.

He also is extremely smart and his play processing is some of the best I’ve seen for this draft class. When his man peels off to block for a screen, he immediately realizes it and starts tracing to the spot. On read options, he knows his assignment and knows to pop up and chop his feet and mirror the quarterback.

Tuszka’s got a great motor, and never stops giving one-hundred percent effort. He played nine man football in high school, and it’s obvious that he has a work ethic to rival the best of them. He never gives up on a play, and knows that if he’s not getting to the quarterback, to get his hands up. This fact got him five pass defenses in his senior year alone.

Where Tuszka lacks is his size. He doesn’t have the arm length you would like to see on an NFL defensive end, and there’s nothing he can do to help that. He’s a bit on the lighter side for a defensive lineman, but he could always get into a nutrition program to try to boost that number, although you want to do that without sacrificing his athleticism.

He’ll need to gain size though to have a chance against running plays at the next level. While he was excellent at rushing the passer, he struggles a bit when linemen can into his pads and move him back. This is most noticeable on running plays where he has to try to use his strength and wait to stack and shed.

It’s always hard to get a read on these FCS guys, and Tuszka is no exception. He was dominant at this level, but was that because he is that good? Or is it because he’s playing against a bunch of guys who would never sniff an NFL practice squad, let alone the active roster. It’s hard to tell, especially at a position like defensive end where athleticism can make a guy look dominant, but when he’s matched by a player closer to his athletic ability, it comes down to strength and technique, something that Tuszka didn’t need to show a ton of.

If the Vikings wanted to draft Tuszka, they would need to spend a sixth or seventh round pick on him. He had a strong combine and could be moving up draft boards, but I still don’t think he’ll crack the fifth round. He might even fall out to be an undrafted free agent and then the Vikings might have a bit of a hometown advantage.

So, should the Vikings target the local kid? I think they should, but not to play defensive end. He’s got the speed and athleticism to play linebacker. Teach him to play the pass and let him learn behind Eric Kendricks and Anthony Barr. Put him on special teams where he’ll thrive and then, when the time comes, you can use him as a sub linebacker or even as a rotational defensive end.