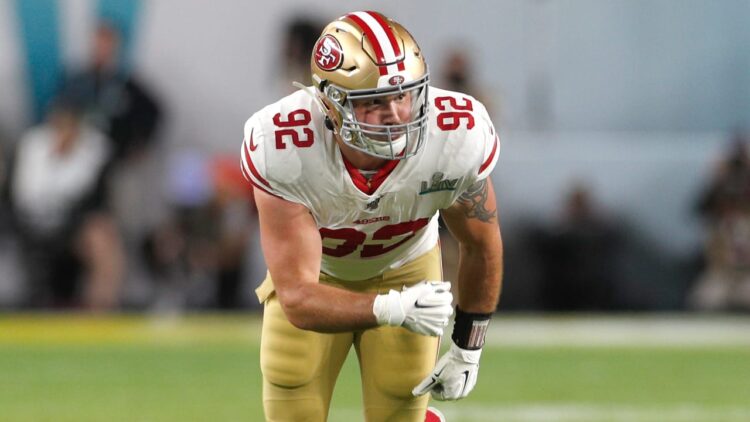 Despite the fact that the governor of the great state of Minnesota declared that the state would, for the most part, be shutting down due to the COVID-19 pandemic, the Vikings were actually busier today than they have been this free agency period (at least when it comes to adding players to their roster). They reportedly signed former Titans wide receiver Tajae Sharpe, and also have added journeyman defensive end, Anthony Zettel.

Zettel, 27, is on his fifth NFL team. Most recently with the 49ers, had one tackle in 11 snaps vs. Vikings in playoffs. Former Lions starter in 2017.

Here’s some highlight film from Zettel’s time at Penn State:

And a clip of him on SportsCenter back in 2015 (that includes the footage of him tackling said tree):

He has also done some MMA training in his time:

Zettel played on two teams in 2019, first the Bengals and then the 49ers. He played in five total games, piling up six tackles through those contests. He also appeared in the playoff game against the Vikings, albeit sparingly. He had one tackle on 11 snaps. I know none of this screams excitement, but keep in mind that because of COVID-19 the NFL could have to turn to non-human sources to field teams in 2020. That could mean that one team could end up being solely comprised of a bunch of Groots. Which, could make Zettel the best pick up of all-time.

Like I did for the other Vikings signing today, let’s take a look at how Zettel did at the combine (as it’ll show, especially in terms of Zettel, their physical attributes as we don’t necessarily have much film to watch for him actually… You know… Playing football).

Zettel is known as a free-spirit who tackled trees, yes trees, as part of his training (what?). He has a relentless motor and therefore is a nightmare for lazy opposing offensive lineman who might take a play or two off (think most SEC prospects). I’ll let NFL.com explain the rest:

“STRENGTHS: Relentless motor. Doesn’t give offensive lineman a snap off with a lazy rep. Credited by Penn State with 38 tackles for loss over his career. Urgency ratchets up even higher when he smells a play is there to be made. Reads quarterback’s eyes and steadies himself to time a leap into passing lane. Had six passes defended in 2015. Has decent lateral footwork and a functional spin move that can open opportunities for him.”

What are his weaknesses? Let’s go back to NFL.com for that:

“Undersized interior lineman. Missing the necessary sand in his pants to take on double teams or down blocks without being pushed out of the gap. Gets mauled by power. Will struggle to leverage his gap with strength in the pros. May not have a natural position fit. Has short arms and can be controlled by length of tackles when playing outside.”

The good news is that he’s played on the outside during his time in the NFL so some of the criticisms about him being undersized as an interior lineman aren’t as valid (although the short arms thing is a bit of a concern). But, this is clearly a depth move for the Vikings who have a lot of positions to fill and it’s looking like they’ll be shopping for a defensive end in the first-or-second round of the upcoming draft.

That’s not a surprise, either, as it wouldn’t make sense for them to break the bank to bring in some stud defensive end after spending all of this time opening up cap space by releasing some of their older players.

Namely, if you’re going to start a rebuild on defense it doesn’t make sense to then turn around and sign some flashy defensive end that’s in the prime of their career, as you’re at least a season or two away from really doing anything special (despite what some of the “glass isn’t just half full, it’s completely full and it’ll always be full because it’s the Vikings and my love for them means that I can’t say anything even remotely negative for some reason” people in the comments section may have you believe (Odenigbo showed potential therefore it’s not a rebuild!)).