Frey’s Fantasy Focus: Who Will Lead the Vikings Offense This Week? 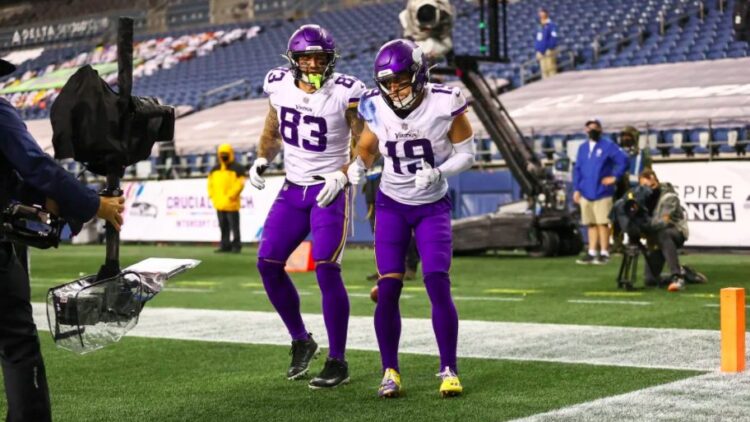 The Vikings are coming off a miraculous win against the Panthers last week, and this week they get a matchup with the lowly Jacksonville Jaguars. This matchup should have every player on the Vikings offense salivating at the chance to put up huge numbers.

The Jags rank in the bottom five in both passing yards and rushing yards allowed, the bottom ten in turnovers forced, and the third worst in points allowed, allowing opponents to score nearly 30 points per game. So, who will the Vikings feature most this week?

Kirk Cousins was phenomenal throughout the month of November, and that should continue into December. Cousins tossed 12 touchdowns compared to just one interception last month while recording 18 or more fantasy points in all but one matchup. The one time he didn’t was against Green Bay where Dalvin Cook stole the show.

The Jaguars defense has not held an opposing quarterback to under 250 yards since week six, so Cousins should have plenty of opportunity to throw the ball on Sunday, especially given his talented receivers in Adam Thielen and Justin Jefferson. Cousins is a viable starter for at least one more week before Minnesota hits the road to visit Tampa Bay.

Dalvin Cook was held in check last week for one of the few times this season. The Panthers defense allowed just 61 rushing yards and no touchdowns to the dynamic back. This week, Cook is still listed as questionable with an ankle injury. While I would expect him to be available, I would also expect Alexander Mattison to get a decent amount of touches this game, unless it’s close in the fourth quarter. Given the recent loss to Dallas, it wouldn’t be the strangest thing to happen this season.

That said, Jacksonville has allowed over 100 rushing yards in nine of their last ten games. This includes a 206-yard combined performance from Cleveland’s Nick Chubb and Kareem Hunt last week. The Jaguars have also given up 14 rushing touchdowns this season, so it’d be safe to assume Cook finds the end zone this week. Consider him an RB1 caliber player even with the injury.

If you look at Thielen’s production against some of the lackluster passing defenses in the league (i.e. Atlanta, Green Bay rematch, Detroit), he has not been Cousins’ favorite target. In these three games, he had just five, four, and five targets. He also had another game of just five targets in week three against Tennessee. Instead, Thielen has been Cousins’ go to guy against the best defenses or in close game situations (see Indianapolis, Seattle, Houston, Chicago, Dallas).

While Thielen will be listed as WR1 this week, I’m not convinced that his target share will match up. Justin Jefferson looked great last week against Carolina in his absence, and while Bisi Johnson has been nonexistent for much of the year, you can’t ignore the fact that he caught seven balls last week. He may have reemerged as an option in the passing game.

That said, Thielen is always going to be a scoring threat, and they should do a ton of that this week. Leave Thielen as a WR2 in your lineup solely because of touchdown potential.

When Jefferson has earned five or more targets this year, he has put up double-digit fantasy points in six of the seven games. There are a couple reasons behind this. First off, he has been Cousins favorite deep ball threat all season. He is fourth in the entire league in yards per reception at a ridiculous 17.7, and by far the highest on the Vikings. Second is Bisi Johnson’s very small sample size of 13.5 Y/R.

The second, and most recent, reason is that Cousins is just throwing him the ball more. I alluded to this in the Thielen section, but Jefferson had a season-high 13 targets last week against Carolina. He also caught two touchdowns, doing his best to knock down my only critique of him which has been his effectiveness in the red zone.

Under pressure, quarterbacks revert to what is comfortable. Throughout much of the season, Thielen has been Cousins favorite red zone target because that is what’s familiar and comfortable. With Thielen out, Cousins was forced to go to Jefferson in these situations, and the rookie delivered. I wouldn’t be surprised if Cousins remembers that this week. I consider Jefferson a WR1 against Jacksonville.