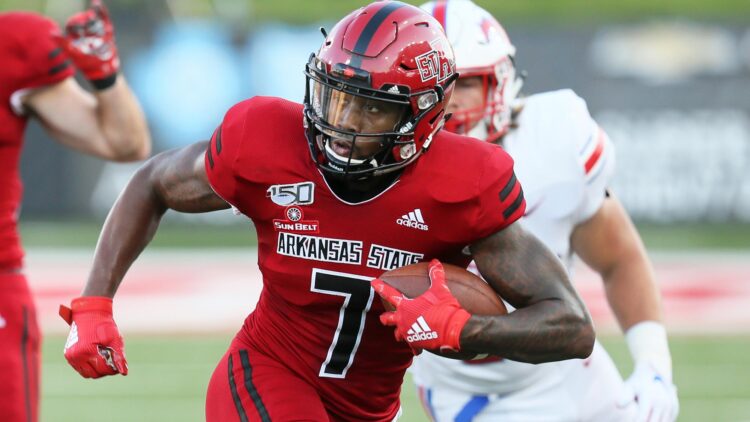 The 2020 NFL Draft is stuffed with receiving talent. A lot of experts are predicting that it will be a historic class to rival the likes of 1996. Marvin Harrison, Terrel Owens, and Keyshawn Johnson, were in that class, to name a few. This year Jerry Juedy, Henry Ruggs, and Ceedee Lamb headline the class, but there are four other wide receivers who have what I consider to be a first-round grade.

This is a great thing for a team like the Minnesota Vikings who need another big play threat opposite of Adam Thielen. Minnesota had that weapon in Stefon Diggs, but he has been traded to Buffalo after much cryptic tweeting and instagram posting. That has netted the Vikings the 22nd overall pick in addition to the 25th overall pick that they already held.

So, let’s assume the Vikings don’t move up and grab Ruggs, Juedy, or Lamb, but they do reel in one of the four other first-round talents. That would still leave them with a need at receiver. They have Olabisi Johnson who did a decent job filling in for Adam Thielen, but he doesn’t bring enough to the table to lock down the third wide receiver position. So the Vikings should look for a diamond in the rough to work behind Thielen and their first rounder. Then he can eventually move up to the second receiver position.

One of those options in the middle rounds is Arkansas State’s Omar Bayless. Over four seasons for the Red Wolves, Bayless put up 2775 receiving yards, 177 receptions, and 26 touchdowns. In 2019 alone, he recorded 1653 receiving yards, which was good for second in the nation behind LSU’s Ja’Marr Chase, and his 17 receiving touchdowns was third best behind Chase and his teammate Justin Jefferson. For his excellent 2019, he received third team AP All-American honors and won Sun Belt player of the year.

Bayless participated in the 2020 NFL Scouting Combine, where he measured in at 6’1” and 212 pounds with an arm length of 31 ⅞” and 9” hands. He also ran a 4.62 second 40-yard dash and put up 11 reps on the bench. These are very similar measurements to former Vikings, and current Atlanta Falcon, Laquon Treadwell. Treadwell’s 40 time was a hundredth of a second slower, but they both put up 11 reps on the bench.

When you watch Bayless’ tape, you often see a man among boys. His ability to make catches that end in touchdowns is amazing. He has an ability to vary his speed and use what little juice he has to get just a bit of separation and make catches that rival many NFL highlights.

He never fights his hands, and that’s probably his biggest selling point. When he goes up for a ball, he has a knack for getting his hands in the right spot and easily pulling the ball out of the defender’s grasp. That makes him dangerous in the redzone on throws where his quarterback would normally need to be perfect with his throws.

Bayless also has the ability to work back to his quarterback nicely on comeback routes, where his sudden change of speed helps him create a bit of separation. Unfortunately, that’s where the good ends for bayless. He doesn’t have the quick feet to create seperation on routes where he needs to cut in. That limits him to simple curls and vertical routes, which is most of what he ran at Arkansas State.

He also doesn’t have the strength to get off of press coverage, and like I’ve said he doesn’t make up for it with quickness or speed. He got away with a very limited skill set because he plays in the Sun Belt conference and his competition is nowhere close to an NFL level. He’s going to struggle against next level competition unless he can add some muscle and become a true red zone threat.

I made the comparison to Laquon Treadwell earlier, and I think it’s a good one. When a guy is a bit slower, but has the ability to make contested catches, I see a lot of people that want to compare them to Deandre Hopkins. It makes sense because Hopkins was a guy who didn’t test well, but was incredible once he stepped on the field. However, I also feel that Hopkins has always had an excellent feel for the game, sufficient route running ability, and enough speed that when he needs to, he can create just a bit of space.

On tape, Bayless looks like the Deandre Hopkins of the Sun Belt Conference, but that’s a completely different level of play. At least Treadwell did it in the SEC, where a ton of guys are going to the NFL. So, Bayless is probably going to end up like a poor man’s Laqoun Treadwell.

Now I always defended Treadwell, but that’s because I felt he could have competed in the NFL in the right system. A system that was nothing but curl routes and fades. In this case though, I’m not going to defend Bayless. If the Vikings wanted to draft him, they would need to spend a fourth or fifth rounder. At that point they’d be better off taking a guy with more athleticism, or not taking a receiver at all.