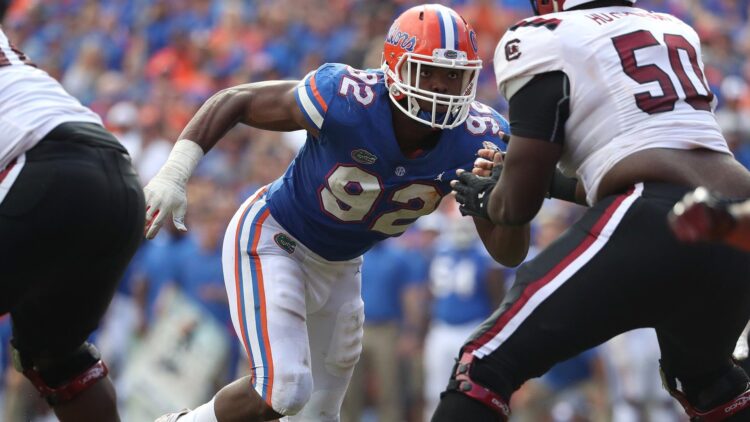 The Minnesota Vikings have officially moved on from long time defensive end Everson Griffen. Griffen, who has played his entire ten year career in Minnesota, and his agent broke off talks with the Vikings late last month. This leaves a hole on the defensive line opposite of Danielle Hunter.

Of course that hole could be filled by Ifeadi Odenigbo, who played excellently as a role player last season. Odenigbo, a former seventh round pick by Rick Spielman, recorded seven sacks, 24 total tackles, and two fumble recoveries, of which one was returned for a touchdown.

Odenigbo or Hunter both bring experience and complementary skill sets. However, Griffen was the emotional leader of the Vikings, and you need only to look at the 2018 season to see that. Griffen missed time with mental health issues, and when he returned to the team wasn’t the same player. In his time away from the team, the defense looked flat and uninspired.

Unfortunately, with Griffen’s departure, and the cutting of Linval Joseph, the Vikings are not only left with holes on both their interior and exterior defensive line, but they’re short on intensity. That’s where Jabari Zuniga, an edge prospect out of the university of Florida comes in.

Despite being at the 2020 NFL Scouting Combine, Zuniga was limited and did not participate in the three cone drill, 20 yard shuttle, or the 60 yard shuttle. Zuniga measured in at 264 pounds, and 6’3”. He also measured in favorably with massive 10 ⅜” hands and sufficiently long 32 ⅞” arms. Mockdraftable.com actually says that his measurements are a 91.8% match with Odenigbo.

When you watch Zuniga’s tape, you see his athleticism and strength on display. He bullies through guys when they’re asked to go one on one with him. He has the speed to run stunts and take advantage of free runs at the quarterback, closing down any throwing or running lanes in seconds.

He played mostly outside at Florida, but did slide in and play inside occasionally. This versatility to slide around could make him valuable to a guy like Mike Zimmer, who loves to rotate defensive linemen and give different looks. It could also play to Zuniga’s strength as a raw pass rusher, and give him a chance to play while still receiving coaching on his technique.

Technique is an important word when talking about defensive ends, and Zuniga is no exception. He really excels at pushing through blockers, and when they give him a target to hit, he can take advantage of it with powerful hands. However, when he faces more experienced blockers that don’t get blown off their spot, and know how to use their hands, they can often handle Zuniga as he doesn’t counter well. He also has a tendency to stay high and not use his length and leverage to slip past guys.

Where Zuniga really struggles though is his play processing and overall awareness. He’ll often get tunnel vision on the quarterback or running back and can be thrown off by a simple fake. He has a hard time recognizing screens and tracing his man to cover them. His straight line speed is excellent, but he has a tendency to get revved up and then have a hard time changing direction. Fluid is not a word that comes to mind when watching Zuniga.

He also has missed time in his career due to injuries. In 2017, he played ten games, most of which he was injured for. In 2019, he played in only six games due to a high ankle sprain, which is what limited him at the combine. If he does stay healthy though, it could make him a steal as his lack of playing time will make him drop when he could have been destined for a much higher draft position.

If the Vikings want to get Zuniga, they will need to spend one of their third round picks on him. I’ve seen a lot of talk of him at 105, which is a compensatory pick. This would be an excellent time for the team to draft a high upside guy like Zuniga. He’s very raw, and there are health concerns, but he has a high ceiling, and I think he could be useful as both a defensive end and as a pass rushing defensive tackle.

He also has a ton of fire in his belly, and the defense could use a shot of that energy every once in a while. Zimmer and Spielman should really consider getting Zuniga and grooming him to be the Vikings next fiery defensive playmaker. Hopefully his ankles hold up, and they can get another gem.