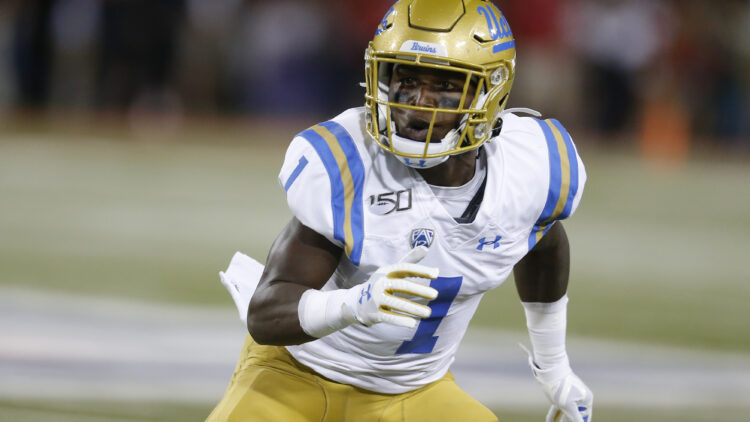 UCLA defensive back Darnay Holmes drops back in coverage against Arizona in the first half during an NCAA college football game, Saturday, Sept. 28, 2019, in Tucson, Ariz. (AP Photo/Rick Scuteri)

The Minnesota Vikings are hurting for cornerbacks. With the departure of their former top three corners; Waynes, Rhodes, and Alexander, the team is left with a distinct lack of experience and depth.

Depth is because after Mike Hughes, Holton Hill, and Kris Boyd, their new top three, they have no distinct talents. Experience is lacking because Hughes missed almost his entire rookie, and part of last, season with injury. Holton Hill didn’t play much until the second half of his rookie season, and missed time last season with being suspended for PEDs. Kris Boyd played significant time last season, his first year in the league, but most of that time was on special teams.

The Vikings will likely be looking to remedy this problem in the upcoming NFL Draft, considering the lack of free agent cornerbacks available and the team’s distinct lack of cap space. If they want to fix both the problem of depth and starting talent, they will need to take a high-end talent early in the draft, but they could target a high potential prospect in the middle rounds like the University of California Los Angeles’ Darnay Holmes.

Holmes, a three year starter for the Bruins, recorded 120 total tackles (88 solo, 32 assisted), 17 passes defended, eight interceptions, and two defensive touchdowns. He also returned 38 kicks for 878 yards, an average of 23.1 yards per return, and one return touchdown.  An exceptionally hard working student, he finished his degree in less than three years.

Was a participant at the 2020 Senior bowl, but didn’t record any stats. Holmes participated at the 2020 NFL Scouting Combine, but only ran the 40-yard-dash, did the bench press, and was measured. Measuring in at 5’10” and 195 pounds, neither of those are terrible, but neither are exceptional. The story is much the same for his 12 bench reps. Luckily, his 4.48 second 40 time shows some good speed. His arms measured in at just 29 ½” which is very short.

When you watch Holmes’ tape, you see elite off-man coverage skills. It’s rare to see a college corner make as many plays after starting as deep as Holmes often does. He has smooth enough hips to keep up with most vertical routes. He also is very good at playing the ball and not his man, making NFL level plays in one on one situations.

Holmes also has a great motor and is giving 100 percent at all times. One of his signature plays in college was chasing down a receiver and forcing a fumble on what appeared to be a breakaway touchdown. He could have a shot in the NFL on effort alone, and will probably respond well to being challenged by coaches and his teammates.

Of course it’s great to see him make so many great plays playing deep off his man, but it also illustrates his lack of skill in press coverage situations. He tends to get “big boyed” when asked to jam players off the line of scrimmage. He obviously lacks functional strength to stand up against bigger receivers. This is also apparent in his difficulties bringing down ball carriers who have any sort of momentum when they meet him.

This lack of strength, combined with his short arms and smallish frame, means that he really has no definite position. Do you put him on the outside and risk not being able to stop bigger threats on jump balls, or stick him in the slot where his lack of press skills and strength make him a liability? There will certainly be a problem figuring out how to use Holmes that will probably keep him from being an effective contributor in his first couple seasons.

If the Vikings wanted to get Holmes, they would need to spend a fourth round pick on him. He’s projecting to go early to mid fourth, but could fall to the end of it. He’s an intriguing prospect, and he could maybe become an effective nickel if he packs on the pounds and learns to play better press coverage.

His ceiling is high with how instinctual he is and his feel for playing receivers, but his physical limitations mean that he also has a very low floor. If the Vikings are looking for a safe pick, or somebody to contribute immediately, they should steer clear of Holmes.