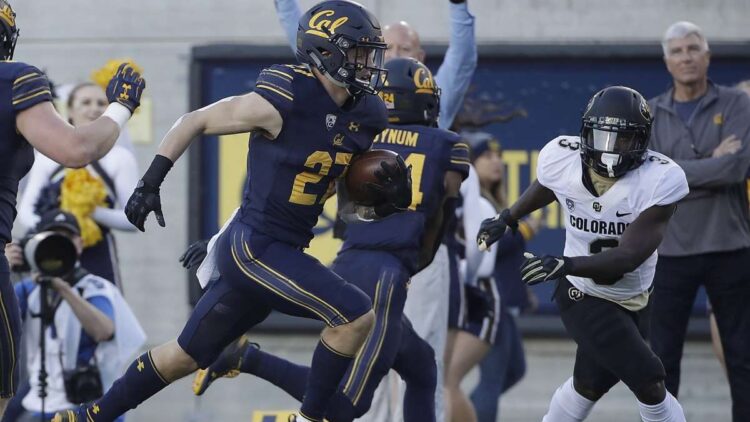 California cornerback Ashtyn Davis (27) runs past Colorado wide receiver K.D. Nixon, right, as he returns an interception for a touchdown during the first half of an NCAA college football game in Berkeley, Calif., Saturday, Nov. 24, 2018. (AP Photo/Jeff Chiu)

The Minnesota Vikings secondary is getting a makeover this off-season. Mackensie Alexander and Trae Waynes both went to the Cincinnati Bengals, and Xavier Rhodes was cut and headed to the Indianapolis Colts.

This leaves the team with only Mike Hughes, Holton Hill, and Kris Boyd as cornerbacks who have played significant time in the past few seasons. I’m not counting Marcus Sherels on this list as it’s being speculated that he may retire, and if he is forced into a true role on defense, not just special teams, there’s no real hope for this secondary.

Confusingly, Mackensie Alexander didn’t sign in Cincinnati for a ton of money, 1 year and $4 million. However, the Vikings don’t appear to be in on any free agent cornerbacks at this time despite all of their veterans departing.

This leaves the NFL Draft as the only time for the team to add more talent in the secondary. Insert obligatory “Mike Zimmer wants to draft ten cornerbacks” comment here. In all seriousness, it’s very likely the team adds a high floor corner early in the draft, but it’s also very likely that they will be targeting high intelligence, high upside secondary players in the middle of the draft.

This opens the door for safety Ashtyn Davis, a 6’1” 202-pound former walk-on from the University of California Berkeley. Davis played four seasons for the Golden Bears and spent time as a kick returner, punt returner, cornerback and safety. Davis collected 166 total tackles (102 solo, 64 assisted), 12 pass defenses, seven interceptions, and one touchdown on defense.

On special teams, Davis returned 70 kicks for 1604 total yards, an average 22.9 yards per return. He also scored a kick return touchdown in 2018 versus Idaho State. Davis returned two punts for 33 yards in his college career.

Outside of football, Davis was a track star and four time All-American in track and field. Davis attended the 2020 Senior Bowl, but didn’t play due to injury. He also was at the 2020 NFL Scouting Combine, and put up 14 reps on the bench, but didn’t participate in any other drills due to injury.

When you watch tape of Davis, you see his track background and athleticism. In a straight line, he’s one of the best and probably would be towards the top of this class in the 40-yard dash, but he won’t get a chance to show that due to the cancelling of college pro days. For how good he is in a straight line, he doesn’t get lost when playing in cover and his hips are sufficiently flexible to allow him to move with receivers.

His coverage skills are surprisingly polished, and he has a ton of experience playing all over the field. In Cal’s base defense he plays a single high, or deep third/ half coverage. However, when they switch their defense, he often comes up and plays the slot corner role. That versatility would be huge for a team looking to add depth at multiple secondary positions.

Davis showed off his return skills as a kick returner in college, but in the NFL he’ll need to transition to punt returns if he wants to make a significant impact with how neutered kick returns have become. He has the skills to do it, I think it will be a matter of learning the mental side of when to fair catch, when to let the ball go, and how to deke the coverage team into letting the ball bounce into the endzone. Perhaps he can get himself a punt returning consultant, could be a good fit for Sherels.

Value could be added on the other side of punts and kicks by having Davis play a gunner spot. With his track background, he could be one of the more devastating players there, although he’ll need to ramp up the aggressiveness at the next level. Too often, he runs up to plays and just touches the runner down after shuffling around the pile. He needs to learn to us his body to be an enforcer and try to pop the ball out with his shoulder when presented the opportunity.

He’ll also need to improve open field tackling technique. When he does play aggressive and downhill, he has good strength and pop. However, he needs to bring his arms into the equation and wrap up ball carriers. When he is the last line of defense, you have to hold your breath and hope his initial contact is enough to bring the runner down.

If the Vikings wanted to get Davis, they would need to spend a third or fourth round pick on him. They have a compensatory pick in the third that might be perfect positioning for Davis. He’s not in the upper tier of defensive backs in the draft so he’ll probably get passed up a bit. However, with his versatility and experience playing multiple positions in a shifting system, he should have a pretty high floor and his adjustment to the NFL should be smooth.

The Vikings need to do something to shore up their defensive backfield, and Davis would be excellent depth at both slot corner and safety, not to mention his special teams potential. He’s not the physical freak that Jayron Kearse was, but he has better ball skills and his draft position may make him a perfect fit. Davis shouldn’t be the first defensive back taken by the Vikings, but he could be the second one and a steal in a loaded class.