To read part one of this article, click here.

That’s not the “ugly” in this article, but more of a statement of tranquility to get you through the following.

If you’re unfamiliar, Brzezinski is one of the most respected executives in the league, mostly known for his work in cap management. He is the reason the Vikings have been able to stay competitive and make signings even with little to no cap room.

But, even though I believe in the entire Vikings front office, I am a bit weary of the cap situation going forward.

Join me in putting on a tinfoil hat for a moment.

Yannick Ngakoue being traded to the Minnesota Vikings for a second-round pick and a conditional fifth (that changes to a fourth if he makes the Pro-Bowl, and changes to a third if he makes the Pro-Bowl AND the Vikings win the Super Bowl) left many, many fans across the league scratching their heads saying, “That’s all it took for a 25-year old Pro-Bowl defensive end? Why the hell didn’t my team make that trade?”

Is it because other organizations, perhaps, are actively avoiding committing to big-money contracts in the midst of the COVID situation?

The NFL is expected to lose a lot of money this year. While the league has briefly talked about plans going forward — perhaps spreading this years’ financial losses over the course of three or four years — no one can make any accurate predictions looking forward to 2021 and beyond.

How much will the cap for each team actually go down for the 2021 season? Two million? 10 million? 15 million? More?

The NFL and NFLPA recently reached an agreement that the 2021 salary cap floor will be $175 million, and without fans being allowed in the majority of stadiums this season, it’s hard to see the cap raise much above that.

The proposal being discussed by the NFL and NFLPA would spread the impact of any revenue shortfall in 2020 over four years, with a 2021 salary cap of at least $175 million, sources tell me and @MikeGarafolo. No change to the 2020 cap despite owners' proposals.

Maybe the Vikings got such a good deal for Ngakoue because other organizations were unwilling to commit to a large financial responsibility in a time of such uncertainty moving forward?

And taking into account the Vikings are already in cap limbo, the new signing could mean quite a few casualties across the board for the team.

As it stands for 2020, the Vikings have virtually no cap room, and Ngakoue willing to take a pay cut was certainly a stroke of luck for the team.

According to Spotrac, who account for the salary cap being $175 million in 2021, the Vikings, at this moment, are expected to be over $11 million in the red.

So, based on Spotrac’s estimation, the Vikings will not only need to find a way to clear $11 million from their books, but also find the money to re-sign: Ngakoue, Dalvin Cook, Anthony Harris, and reliable backups Jaleel Johnson, Brett Jones, Eric Wilson, Rashod Hill, and Ifaedi Odenigbo.

This clearly means quite a few of those names, and quite possibly others, will be sacrificed after the Ngakoue acquisition.

It has been reported that LT Riley Reiff will be accepting a restructure to stay with the team, thereby increasing the Vikings’ cap space this year and beyond.

While this move would most likely bring the Vikings out of the negative for 2021, questions still remain for re-signing impact players.

Does the team let Dalvin Cook and Anthony Harris walk after this year? Cook now seems like a certain casualty with Alexander Mattison poised to take a starting role, but can the organization really depart with Harris given the extreme lack of depth and reliability in the current safety unit?

Chad Graff wrote in this article on The Athletic that the current state of backup safeties for the Vikings is abysmal at best.

He writes, “The Vikings knew they needed help behind Harrison Smith and Anthony Harris. They selected two safeties in the draft, but neither have played as they hoped. They cut seventh-round pick Brian Cole this week, and in a sign of how they feel about the position, they brought George Iloka in for a workout and claimed Steven Parker off waivers (…) If there’s something that coaches will root for, it’s that Smith and Harris stay healthy this season.”

Not wanting to pay Anthony Harris’ contract is one thing, but letting him walk when the team has no other option at the position is another.

When it comes down to it, this is a problem for another day for the Vikings.

Today, let’s be excited. The Vikings recently acquired a young, Pro-Bowl caliber player for next to nothing.

Tomorrow? Well, let’s not think about that. 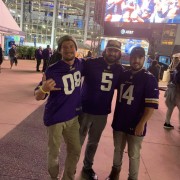 Contributor from Texas, but Minnesota born and raised. The Vikings will be the death of me but I wouldn't have it any other way. SKOL.

NFL Coaches in 2021 with the Hottest Buttocks