Pressure is On the Kicking Game 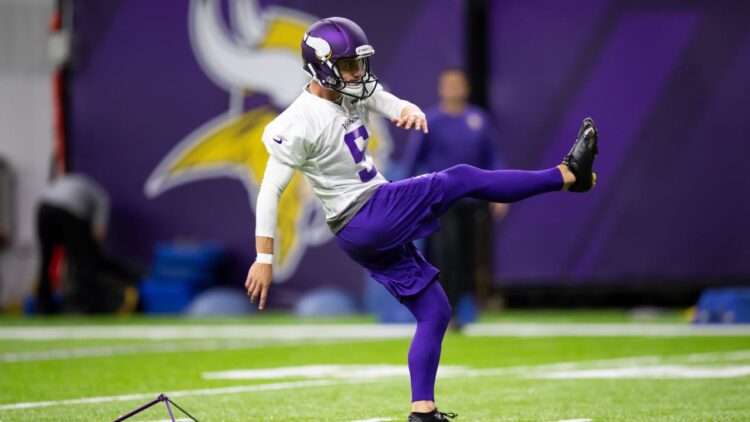 Whenever I hear the name of Chicago Bears place kicker Cody Parkey (and that has been quite often lately), I can’t help but think of this Monty Python sketch (listen the whole way through for the relevance). I was even saying “don’t do it, Parkey!” on Sunday during the Bears and Philadelphia Eagles wild card playoff game. It’s not because I am worried about Parkey falling off a building, rather I was hoping he wouldn’t kick the winning field goal for the Bears—which he didn’t. (And there was much rejoicing.)

Parkey’s “double doink” missed kick to lose the game was a brutal reminder of the nature of this game and particularly his position. I was glad to see him handle the post-game interviews with grace and guts and that he won’t be replicating anyone in that wicked Python sketch, but we know it may haunt him for a while. While I was glad for the miss, I would suspect that goal posts will be showing up in his dreams as narrowing, blood-dripping tridents, where even the crossbar is morphing into a prong.

As Vikings fans, we know this pain. Wide left in 1998; way-wide left in 2015; and 0 for 2 in OT in Lambeau. And the list can go on. The life and times of field goal kickers is a sordid amalgamation of a great gig most days mixed with the weight of the world from teammates and extended fan bases crashing down on you on selected Sundays. Gary Anderson was near the end of his career, so he survived his only miss of the season in 1998 (I have not, entirely). Still, his legacy in Minnesota is remembered way more by that miss than all the field goals he made during that stellar season.

But Blair Walsh did not survive. He never really recovered from that failed deposit at The Bank against the Seattle Seahawks in 2015. He left here after nine games in 2016 (replaced by Kai Forbath for 23 games), and then kicked for those same Seahawks in 2017 for one season before being out of a job this past season. Is it all over for the All-Pro rookie who still holds some NFL records? The final chapter may not be written yet, but we can all see what is being written on the wall.

And then there is the case of Daniel Carlson, who in his second NFL game of his rookie season, playing for the Vikings in Green Bay, missed all three of his field goal attempts on the day (two of them will within his range during overtime) and was cut the next day. Carlson landed on his feet, however, leaving the pressure of the Vikings, a team which had Super Bowl aspirations, for the transitory Oakland Raiders, who have held a fire sale on their talent this season. That release of Carlson’s pressure valve may have been just what the rookie Carlson needed, as he went from 1 of 4 field goals made for Minnesota to 16 of 17 made for the Raiders (plus making all 18 of his PATs in Oakland). Pressure and perception of it are clearly a determining factor in field goal kicking.

That instance has brought the Vikings to their current-day kicking situation, which featured former Dallas Cowboys kicker Dan Bailey to finish out the 2018 season. Bailey was 30 of 31 in extra points and 21 of 28 in field goals on the year for Minnesota. But the season is over, and soon Bailey is a free agent, so the Vikings are without a kicker for the 2019 season. Does Bailey return? Did he like it in Minnesota? Or has he seen how thing work with kickers there (counting Walsh, the Vikings have used four kickers in the three seasons since 2016)?

Vikings head coach Mike Zimmer goes through kickers like he does quarterbacks and offensive coordinators—which is to say they come and go quickly. In each case, there are legitimate reasons for the changes: we all know the QB history, and regarding the OC’s, Norv Turner got mad and left, Pat Shurmur got a head coaching gig and John DeFilippo, reportedly, did not see eye-to-eye with his boss strategically. But the question still needs to be asked, is Zimmer too quick on the trigger in all of the areas that don’t have to do with defense? Should we be concerned that these rapid fire changes are all offense related, while the Vikings’ top-five defense has been stable and ascending since he came on board? Another question for another time.

Zimmer’s frustration with the kicking game is well-documented, and we might add, warranted. Walsh’s 27-yard playoff miss was a chip shot, and his career spiraled down in the aftermath. Forbath was perfect on 15 field goals in relief of Walsh in 2016, but he missed three extra points. In 2017, Forbath improved his PAT percentage from 78.6 to 87.2, but he dropped in field goal percentage from perfection to 84.2 percent. Did the Zimmer kicker scowl get to him?

Even Bailey, who came into the Vikings as the second most accurate kicker in NFL history, has dropped to fifth all time while under the Vikings’ tutelage. Hmmmm.

The Vikings drafted the strong-legged Carlson in 2018 draft, and after the one bad game against the Pack, which certainly played into the loss, Zimmer cut him loose. Carlson has missed just one total kick since leaving Zimmer’s doghouse. (In addition, Forbath surfaced in Jacksonville this season and made 4 of 5 field goals and all three PAT attempts—but that isn’t really significant enough to blame Zimmer with.)

But when you look at the Carlson situation, it is difficult not to consider that Zimmer moved on it too soon. Would Carlson have kicked this well (certainly better than Bailey has in his stead) had he remained in the Purple Pressure Cooker? But surely Bailey kicked more often and with more on the line than Carlson experienced out on the coast.

For me, the answer he is that, in retrospect, it looks like an awfully short leash for Carlson in Minnesota, but I don’t think he goes nearly perfect the rest of the season if he stays in Minnesota either. The stakes were much higher here, and the Raiders are clearly rebuilding (dumping Amari Cooper and Khalil Mack in mid-season). So, winning wasn’t as huge a priority in Oakland, as Raiders head coach Jon Gruden is trying to amass high draft picks and a 4-12 record will help with that.

But at the same time, Zimmer is not a golfer, and kicking field goals has a lot of similarities to swinging a golf club—where you are trying to repeat hitting a rounded, stationary object under differing atmospheric conditions. And something that affects both physical endeavors is pressure. So, perhaps the head coach can figure out a way to turn that pressure down. I am not sure it is in his nature to do so, but it might help if he does. Zimmer is a defense guy, where the performance is all reactive and responsive to an opponent’s moves, while a kicker’s are completely the opposite.

Pressure is always on kickers. It is the nature of the job. Unfortunately, it is really on Parkey right now and he doesn’t have another game to try to relieve it immediately. It will be interesting to see how long he remains in Chicago. But regarding the Vikings, Zimmer knows pressure and applies it well on opposing offenses. For his own kicker, perhaps, he may want to find the gauge and turn it down.