Jordan Taylor Has a Tough Road Ahead 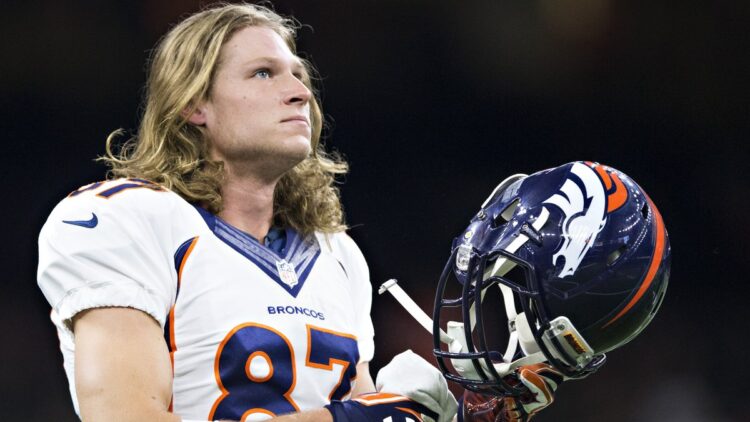 The Minnesota Vikings don’t seem to have a solid plan for the wide receiver position behind Adam Thielen and Stefon Diggs. Last season, the WR3 position was split between Laquon Treadwell, Chad Beebe, and Aldrick Robinson. Treadwell’s low production and untimely mistakes have been scrutinized since the Vikings used a 1st round draft pick on him in 2016. Chad Beebe looked promising in preseason and when he found the field, but injuries kept him sidelined for a good portion of 2018. Aldrick Robinson was a touchdown machine when on the field, but has signed with the Carolina Panthers.

This would seem like the perfect situation for a new player to come in and nab that spot. In April, the Vikings signed former Denver Bronco Jordan Taylor to a one-year contract. Taylor entered the league as an undrafted free agent in 2015, while new Vikings assistant head coach/offensive advisor Gary Kubiak was head coach of the Broncos. Taylor has experience returning punts, fielding 11 for Denver in 2017 while averaging 9.4 yards per return, which should make him somewhat more valuable than his receiving stats. He has just 2 career touchdowns and 351 receiving yards, and at age 27 he’s getting to the point that players get cut and don’t make it back into the league.

Taylor has a tough road to make the team. Although the Vikings signed him, cutting him causes no dead cap hit. He also is coming off of a year lost to injury following a surgery on each one of his hips. In addition, the Vikings have a ton of potential waiting in the wings.

Laquon Treadwell is still only 23 years old. Although it’s unlikely that he turns things around to live up to his 1st-round status, Treadwell should continue to hold a roster spot for his blocking ability and because the Vikings only save a small amount of money if he’s cut. Treadwell did not see the field much after Kevin Stefanski took over last season, and was a healthy scratch in week 16. That will make it hard for him to prove his value enough to play a true WR3, but he will have to be beat out by multiple players to not make the team.

Beebe showed promise last preseason, scoring a couple of receiving touchdowns and returning a punt for 34 yards. Beebe also caught 4 passes in the regular season for 39 yards. Beebe was limited in play due to a hamstring injury, but at only 24 years old he is almost certainly a lock to make the team and challenge for the starting punt returner position. Beebe took most of his snaps from the slot position.

The Vikings are currently carrying six other wide receivers on their roster. So, combining those six players with Thielen, Diggs, Treadwell, Taylor, and Beebe, the Vikings have 11 players competing for probably six roster spots. Diggs and Thielen are locks, leaving four spots. Treadwell and Beebe make the team based on the money invested (Treadwell) and return ability (Beebe), which leaves two spots.

So, Taylor has to fight for one of these final two spots. “Why do I think he won’t make it?” is I’m sure the question you’re asking yourself. Well, for a number of reasons. First, at age 27, he is past the “point of potential.” We know who he is as a player. He is an average returner and a depth receiver.

Second, we’ve seen this situation before. Last offseason the Vikings brought in Kendell Wright to compete for the WR3 spot. Wright was more dead money than Taylor is, Taylor’s cap hit is $0 if he is cut. Wright was a better receiver than Taylor is, and had nearly 4,000 receiving yards by the time he came to Minnesota, including a thousand yard season. If the Vikings were willing to cut Wright, they’ll be willing to cut Taylor.

Finally, and most important, as illustrated by the rest of this article, the Vikings have a ton of competition at this position. Of the two spots available that I talked about, Taylor has to beat out:

I want to see Taylor come into his own and surprise me. I want to see him lock down a spot and make plays and become another valuable diamond-in-the-rough receiver. However, I think the writing is on the wall, and unless he’s plays out of his mind well in training camp and preseason, he will be one of the cuts come time to trim the roster down to size in a season that very well could be the best in the history of the Vikings. For that and all Vikings news, keep an eye on purplePTSD.com/VikingsTerritory.com this season and you can also click the following for all your sports betting plans, as well!