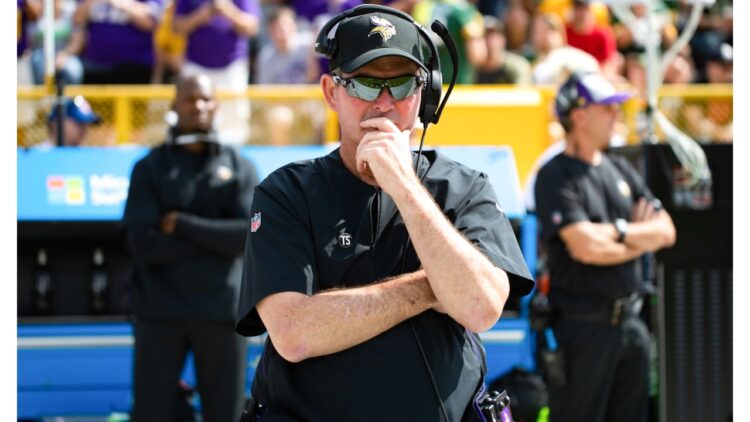 This year’s Minnesota Vikings team was a disappointment in a lot of ways. The offense was anemic most of the year, and the defense didn’t create enough opportunities to make up for it. The Vikings defense was still near the top of the league in sacks, total defense (yards per game), and 3rd down defense, but they created just 20 takeaways, while the offense gave the ball away 20 times for an even turnover differential. The offense was so bad at running the ball, the team ended with less than 1500 yards on the year, as a team, which was 3rd worst in the NFL. Throwing the ball, they were just over 4000 yards, and middle of the road, but you have to remember that a lot of those passing yards came in either garbage time, or as a result of how poor the run game was.

Kevin Stefanski said in his introductory press conference that they want to become more physical on offense, and that starts with running the ball. That is why it is my assumption that Minnesota will be targeting an offensive tackle or guard in the first round of the NFL draft. There is no way that the team can move forward with the unit they had last year. Even with a new scheme and a new offensive line coach, when they get one, the line simply does not have the talent to compete in the NFL. There are a couple linemen who are not going to be replaced immediately, Pat Elflein and Riley Reiff. Reiff, who was selected at number 23 overall in 2012 by Detroit, has done a good enough job to be the starting right tackle, or left if no move is made to get an upgrade. Elflein, who was drafted in the 3rd round by the Vikings in the 2017 draft, has shown that he can do well if given help from his guards, and the Vikings have put a lot on his shoulders going into his third season. I don’t see them replacing a guy that they think could be the starting center for the next 5+ years. So that leaves 3 positions open to upgrades, one tackle and two guards. If the Vikings are serious about improving the line, look for them to make some moves in the draft, especially in the first round.

Another issue the team has moving forward is the linebacker position. With Anthony Barr’s future uncertain, the Vikings should be looking to bring in fresh blood. Also, with both Barr and Eric Kendricks both missing games, 3 for Barr and 2 for Kendricks, you can see that there is always need for depth at the linebacker position. Eric Wilson and Ben Gedeon both have shown the ability to make plays, but neither has shown the ability to make plays at the level of Barr or Kendricks. I’m still a fan of Anthony Barr, (if you want to see a great analysis of Barr check out Sean Borman’s article about him here), but it’s a matter of whether the team sees enough value to re-sign him. If Rick Spielman and company decide to let Barr walk, don’t be surprised to see them pick up a linebacker, or two, in the draft.

Finally, LaQuon Treadwell has turned out to be the player we feared he might be. Treadwell came out of the draft as a big body that was supposed to be then quarterback Teddy Bridgewater’s secret weapon in the red zone. Concerns were voiced by many fans about Treadwell’s lack of speed, a 4.63 official 40-yard dash time at his pro day did him no favors (for reference, Will Fuller ran a 4.32 the same year to be the fastest wide receiver in the combine, but he was supposed to have incredible hands, crisp routes, and win jump balls. Well, 3 years in Treadwell has less than 500 yards receiving, and 1 touchdown. If it was just low production, people would still be concerned, but Treadwell’s inability to make plays has come with more concerning drops. Fans will remember a ball that he dropped in Week 2, that would have led to a Packer’s victory at Lambeau if not for some Kirk Cousins magic. By the end of the season, Treadwell was fighting for snaps with Aldrick Robinson and Chad Beebe, who both were not with the team prior to 2018. With this rotation at the third wide receiver spot, it makes it difficult to build continuity and confidence with your quarterback. Look for the Vikings to pick up a wide receiver in the middle of the draft.

The Vikings have more needs then what I listed here, keep an eye out for a piece on Kickers within the next week, but these three are some of the most important. If Rick Spielman and Mike Zimmer want to build a team that will continue to be a winner, the draft is their most important tool. The poor play of the offensive line makes a compelling case for them to go for a guard or tackle early, but the possible departure of Anthony Barr would leave them thin at Linebacker, and it’s often hard to grab difference making linebackers outside of the first round. They also can’t ignore skill positions, such as receiver, where depth can be an issue with just a couple injuries. These are just three positions where the Vikings have need, but I’ll be keeping you posted about more needs, and potential prospects to fill those needs, throughout the offseason.