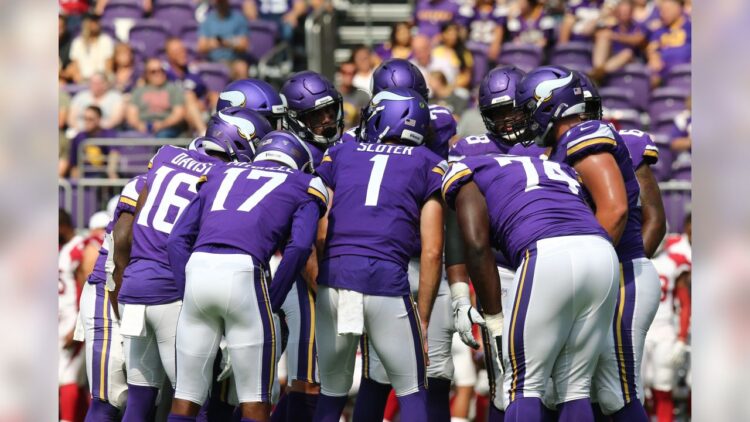 In only four days the Vikings roster will be cut down from 88 players to 53. By 3pm (CST) on Saturday the regular season squad, along with a 10-man practice squad, will be assembled. The team began trimming the fat on Tuesday, releasing cornerback Bene Benwikere and wide receiver Jordan Taylor. With roster cuts soon approaching, let’s take a last look at how the final 53 could unfold.

Breakdown: Barring injury, Kirk Cousins will be the starter and Sean Mannion will be his backup. Mannion’s vanilla, game-manager style of play makes him the “unsexy” option at QB2, but he’s better than most fans give him credit for. He’s shown an ability to take big hits while delivering passes in the pocket and he rarely turns the ball over.

Still, I’m genuinely surprised the Vikings haven’t given Kyle Sloter a legit chance to prove himself. The preseason phenom has done about all you can ask for with the opportunities he’s been given, but he still doesn’t even have a guaranteed spot on the roster. He may not have the desired experience when it comes to choosing a backup quarterback, but he has too much upside — especially in the team’s new offense — to bail on now.

Rookie quarterback Jake Browning will be added to the practice squad as long as he makes it through waivers.

Breakdown: Like the quarterbacks, the 1st and 2nd-string running backs are pretty much set in stone. Dalvin Cook is the starter and Alexander Mattison will be his spell. RB3, however, has been one of the more interesting position battles throughout the summer. Ameer Abdullah air-fumbled in the first preseason game while Mike Boone has had three standout games in a row. Even so, they have different skill sets and each can play multiple roles on special teams, which should make things interesting when it comes to determining how many running backs are kept on the final 53. Ultimately, I like Boone is this competition, with CJ Ham getting the nod at fullback over practice-squad target Khari Blasingame.

Breakdown: Well, so much for the popular ‘Mr. Mankato’ candidates Dillon Mitchell and Davion Davis. Of the young guys at wide receiver, it’s been Bisi Johnson that has risen to the occasion. Since being drafted, Johnson has earned the trust of offensive personnel by consistently being in the right place on the field and keeping a professional demeanor off the field. He’s also excelled in preseason games. Because of those reasons, he has all but secured his place on the 53-man roster.

He’s had a quiet preseason up to this point, but the same can be said about Chad Beebe, who is making the team as a wide receiver and punt return option. Yes, I realize he’s been extremely quiet this preseason but I’m guessing the team limited his reps during the preseason in order to keep him healthy for when it actually matters.

I originally had Laquon Treadwell making the team in my first projection. Now, that seems very unlikely. There is speculation that Treadwell is on the trade block, and since he’s in the last year of his contract, it doesn’t make a whole lot of sense to keep him around through roster cuts.

Brandon Zylstra has been trending upward since he recovered from a hamstring injury that kept him out through the first portion of training camp. Since then, he’s stood out in preseason games, and with Jeff Badet slowed by nagging leg injuries throughout the summer, Zylstra is my favorite to win WR5.

Keep your eye on Mitchell, though. A big game on Thursday could catapult him back into the equation.

Breakdown: The Vikings have one of the deepest tight end groups in the NFL, but how much will that actually help the offense, specifically quarterback Kirk Cousins? Well, tight ends are an integral part of the team’s new offensive scheme. Gary Kubiak has consistently produced productive tight ends throughout his coaching career and it’s something he takes pride in. There’s no doubt Kevin Stefanski would like to continue that trend.

The tight ends on this roster have varying skill sets. Their versatility, along with the eventual return of David Morgan, could be what elevates the 2019 offense from mediocre to memorable. Considering their performances in training camp, both Cole Hikutini and Brandon Dillon are practice-squad worthy in this writer’s opinion.

Breakdown: Kinda nice seeing actual, legit depth at offensive line for a change. There’s some tough decisions to make here because of the solid training camps by Dakota Dozier and Danny Isidora, but you can’t overthink it. Hang onto the most versatile guys like Brett Jones and Aviante Collins as well as the high-upside prospects Dru Samia and Oli Udoh.

I am of the belief that Collins will land on the PUP list, which would take away the risk of sneaking Udoh onto the practice squad. If Collins remains active, though, that’s another story.

Breakdown: No big surprises with the personnel here — I think most of the projections out there will have these same defensive linemen. This is a deep and talented defensive line that if utilized properly should give opposing offensive linemen fits all season. Very interested to see if the unit can return to its run-stuffing ways.

Breakdown: The Vikings kept five linebackers last season. Despite Zimmer’s recent comments claiming seven LB’s could make the team, I simply don’t believe that. Linebacker is one of the more replaceable positions on defense and the team utilizes nickel personnel more than its base 4-3, so the majority of the time only two linebackers are on the field. I’m thinking Devante Downs is cut and then targeted for the practice squad.

Breakdown: On Monday news broke that Mike Hughes was coming off the PUP list. That relived the team tremendously of cornerback depth worries, but there still could be a move made to bolster the position while Hughes is slowly brought back up to speed once he’s physically ready.

This is where I went back and forth between rostering Abdullah or cornerback Craig James. I originally had Abdullah making the team because of his experience as a returner, but lots of guys are capable of returning kicks. I felt providing CB depth as Hughes recovers and while Holton Hill serves his 8-game suspension was more valuable to the team at this point. Hence, Abdullah was my last cut and James made the team. James played well at practice today and we should get an extended preview of what James can do on Thursday night.

Harrison Smith and Jayron Kearse are incredibly versatile players that help make the Vikings defense unpredictable and dangerous. There’s no question each will have a significant role along with starter Anthony Harris, who is poised to continue his playmaking ways. Include the addition of rookie Marcus Epps as a special teams contributor and development project (with a high ceiling) and there’s a lot to like about the team’s 2019 safety depth.

Breakdown: Ahhhh, the specialists. If there’s one area I feel the urge to recommend change, it’s on special teams — and I don’t mean continuously changing personnel. Let’s face it, the “competitions” haven’t worked, the kicking department has been a constant state of worry for Vikings fans and reprimanding kickers during press conferences hasn’t helped. Thankfully, the specialists will be assigned roles by week’s end. But a coach has to know that no kicker is perfect. Showing a commitment to a kicker through makes and misses is one area I believe Mike Zimmer can improve. I believe the team will go with veteran Dan Bailey this season, who has to know that his job is on the line every time he lines up a kick.

The following players will be listed on the roster but will not be active nor count towards the final 53. This is a prediction.

There you have it, the final 53. I do believe there will be transactions made that involve a player, or players, from another team’s roster. The Vikings are thin at a couple of positions like wide receiver yet they are equipped with a surplus of defensive linemen. It could be a busy weekend as the regular season roster and practice squad are finalized. We’ll bring you the latest here at VT.