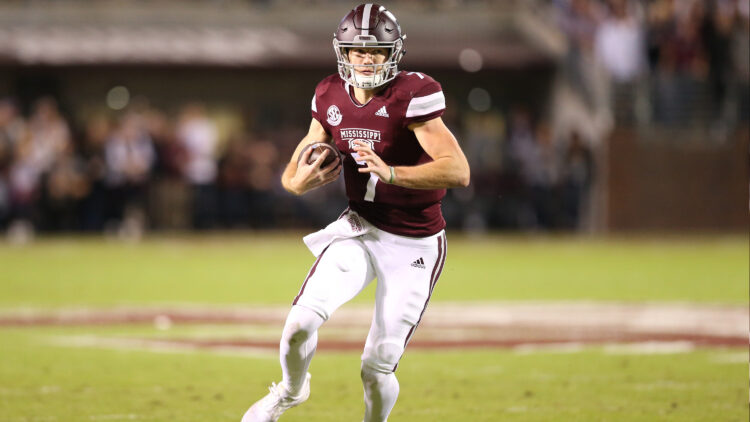 The quarterback position in the NFL is the most important on the team. The Minnesota Vikings are set at quarterback for the next 2 years with Kirk Cousins under contract. However, it takes time to develop quarterbacks, and it’s rare for teams to hit on a rookie unless they are a very high draft pick, so the Vikings should be looking to pick up talent to develop for after Cousins’ contract is up. Currently, Kyle Sloter is the only quarterback other than Cousins on the roster. Because of this, the Vikings should be looking at options in the draft, and have already met with Nick Fitzgerald out of Mississippi State.

Prototypical size seems to be something that everybody bases a lot of quarterbacks on, and Fitzgerald has that size. At 6’5” and 226 lbs, Fitzgerald measures very similarly to Carson Palmer stature wise, but he can move very well for a guy so big. His ability to run was his strong suit, and he can fake handoffs very well as an option quarterback. He also can throw the ball hard, giving him the ability to fit balls into small windows across the middle and on short throws. Fitzgerald is also an incredible competitor and refuses to go down by sliding and will fight to get the extra yards. His plus side mobility, fakes, and strong short passing game gives him the potential to become a good west coast style quarterback.

Fitzgerald certainly has his issues. His completion percentage was low in college, and he also only had a 1.8/1 touchdown to interception ratio, which for a quarterback who ran more than threw is very bad. He also has issues making decisions under pressure, and was more likely to just put it up to his first read then make the smart decision. At Mississippi state, he often stared down his first read and would not go through his progressions well. He also struggled with consistency and would not have been able to win games without his legs, which will happen at times in the NFL. He also doesn’t have a good deep ball often missing receivers down the sideline. At the next level, he won’t have success unless he can learn to place the ball more consistently.

Fitzgerald looks like a guy that could go in the sixth round to being undrafted. Certainly teams will be interested for his size and ability to move. The NFL is a hungry league as far as quarterbacks go, and guys with potential like Fitzgerald will go earlier than their talent level warrants. If Rick Spielman wants him, they will need to spend a sixth round pick because he probably won’t fall to the seventh. Fitzgerald is not the man that Vikings fans should want, not for a sixth round pick, and they would be better off sticking with Kyle Sloter as their backup and an undrafted free agent for depth.

Likelihood the Vikings are targeting him: We know they are

Likelihood the Vikings could land him: Very Likely