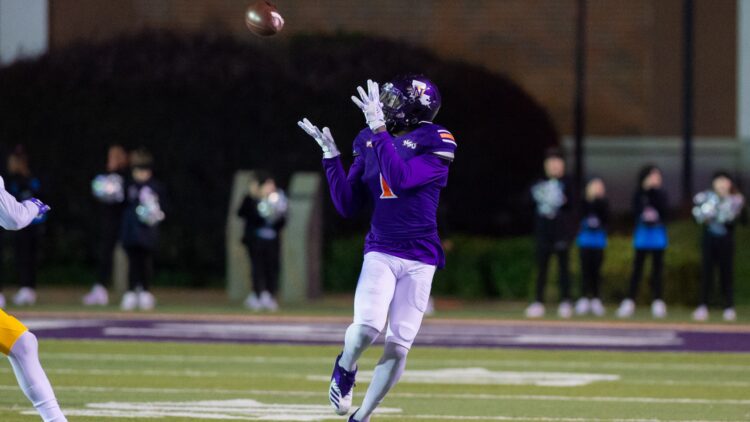 The Minnesota Vikings felt they needed a big bodied, red zone receiver when they drafted Laquon Treadwell in the first round in 2016. Treadwell’s career has not panned out the way he or the team hoped. After an inability to find the field in his rookie season, he began to get slightly more playing time the last few seasons, but with little to show for it. He only has one touchdown, and that came in a game where he also gave up an interception by letting an easy pass go straight through his hands. Despite all this, I think Laquon Treadwell isn’t a bad player, he just has not lived up to the first round pick expectations. This year the Vikings have an opportunity to get Treadwell’s replacement in the last 2 rounds of the NFL draft, Jazz Ferguson out of Northwestern State University of Louisiana.

Ferguson started his career out of high school at LSU, but after his sophomore season transferred to Northwestern State after a failed drug test and poor academic work. After a redshirt season to focus on academics, Ferguson flourished his Junior year receiving AP All-American third team honors. His Junior season he piled up 66 receptions for 1,117 yards and 13 touchdowns. The decision to declare for the 2019 NFL draft came in December when Jazz decided he wanted to enter the draft with his brother Jaylon Ferguson, who is projected as second round defensive end.

Jazz Ferguson is first and foremost a physical receiver. At 6’5” and 227 lbs, he will have an easy time of eating of smaller defensive backs in situations that allow him to be physical. He can use his frame to create opportunities in the endzone, and could become a jump ball threat. At the NFL Draft Combine, he measured with a vertical leap of 37 inches, good enough for 16th among receivers. He also ran a 4.45 40-yard-dash, which while not the fastest, is certainly better than Laquon Treadwell’s 4.64 40 in 2016. Ferguson, like Treadwell, is also a stellar blocker and could become integral in springing long runs through the secondary.

Where Ferguson suffers is in his quickness and route running. His long legs prevent him from being able to be twitchy and shifty, and as a result it can be hard for him to find separation especially against press coverage. As a deep threat at Northwestern State, he showed off his ability to take the top off the defense, but didn’t show his ability to create against tough defensive backs. That may not always be a problem if he can become a sure-handed target, but he also has some mental lapses and has a hard time catching the ball when concentration is required. There are also the red flags of a failed drug test and transfer of school, but it should be noted that his return after some time off was successful, but it might have been to his, and his future NFL team’s benefit, if he had stayed in school an extra season.

If the Vikings wanted to get Ferguson, they would need to spend either a sixth or seventh round pick. I don’t see him sliding fully out of the draft, but he could be a good value pick, especially in the seventh. His fit in the team is questionable. It’s hard to see him outright beating Treadwell for the third wide receiver spot, but he could find himself on the roster if injuries occur. Of course, since I’ve compared him to Treadwell, he might seem like a bad pick. However, he plays faster than Treadwell and has a higher upside compared to where he would be picked at. I also still maintain that Treadwell is a decent football player, he just doesn’t live up to the expectations of his draft position. Ferguson is a player that if he stayed at school another year would be in talks of a second or third round pick, so to snatch him up a year younger and in the sixth or seventh might not be a bad move.

Likelihood the Vikings are targeting him: Unlikely

Likelihood the Vikings could land him: 50-50