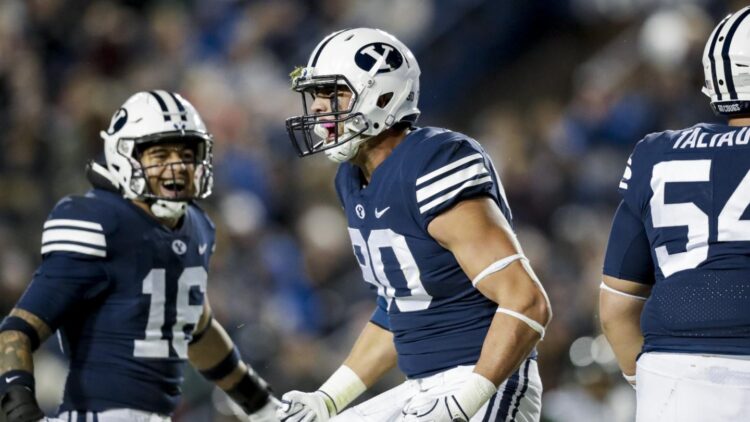 A lot of basketball players make the transition from the hardwood to the gridiron. Most of these players end up at the tight end position due to their height and ability to jump. The Vikings own Kyle Rudolph was a basketball star in high school, but choose to go to Notre Dame to catch passes.

A lot of the problems that these basketball players turned tight ends present comes from their athleticism and a defenses inability to matchup with them in jump ball situations. This makes Brigham Young University 3-4 defensive end Corbin Kaufusi an interesting project on the defensive side of the ball. Kaufusi, whose brother Bronson plays for the New York Jets, has the size of an NBA big man with a height of 6’ 10” and a weight of 275 lbs. In his college career, he collected 153 tackles and 16 sacks. He also scored a receiving touchdown in his sophomore year.

That flexibility and possibility is what makes Kaufusi an intriguing draft prospect, especially as a possible sixth or seventh rounder. Kaufusi has the size to matchup with tight ends in the red zone, and would make for an intriguing sub linebacker in those situations. He does a good job of capitalizing on opportunities when he gets them, free rushes at the ball are rarely wasted, and when he’s being blocked he can at least hold up his man and fill space. If he could be convinced to learn to play some tight end in bid sets, he might have enough value to make the team.

Kaufusi might have the frame to be a difference maker, but he’ll need to improve on some things before he gets there. First, he’ll need to get healthy. He’s had three surgeries since his season ended in November from injury, and didn’t participate in BYU’s pro day last Friday. Availability is everything for fringe players, and Kaufusi will always need to be ready if the coaches call his number.

Finally, He’ll need to be open to coaching. He’s either going to need to change positions and become a full time tight end, or he’ll have to make himself incredibly valuable as a true linebacker, something he didn’t do much of in BYU’s 3-4 defense. Either way, he’s going to need to learn to play with more power. He was easily blocked when contact was made with him. If he’s on the other side playing tight end, he’ll need to be a good, powerful blocker to get his chances.

If Minnesota wanted to take a chance on Kaufusi’s intriguing build and athleticism, they would either need to spend a sixth or seventh round pick, or wait an lure him in as an undrafted free agent. Plenty of teams will have him on their radar, but his injury concerns might let him slip out of the draft. I don’t think I would take him with a pick, but try to bring him in as a camp body and let him play to make the team. These project players are often intriguing but almost never pan out. I hope Corbin Kaufusi proves me wrong.

Likelihood the Vikings are targeting him: 50-50

Likelihood the Vikings could land him: Likely